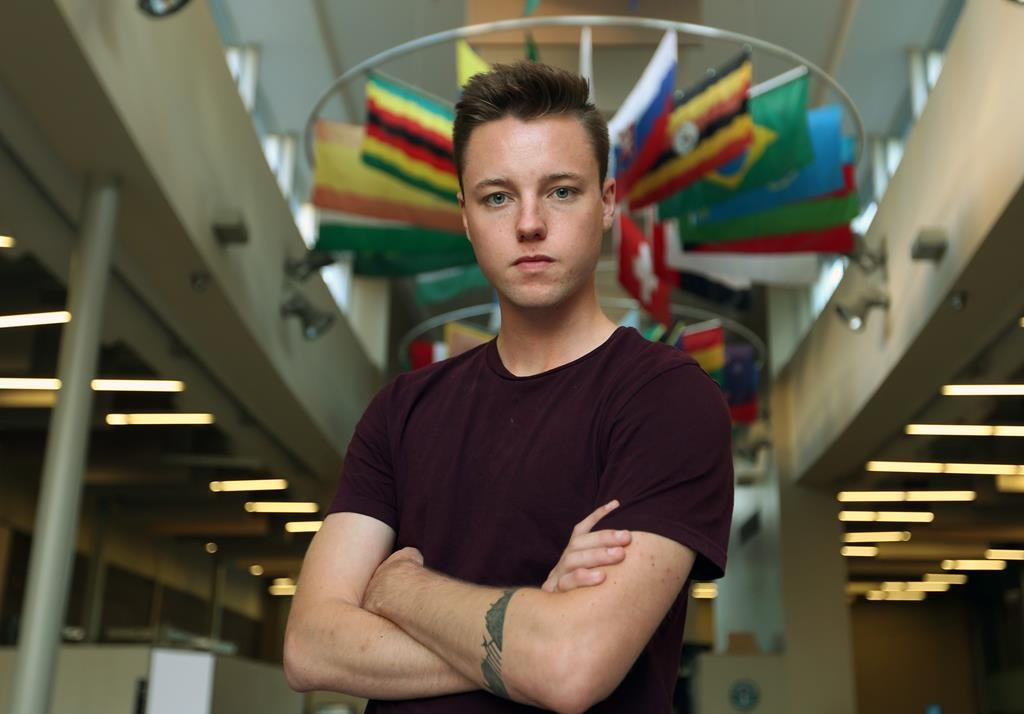 Troy Curtis, the president of Carleton University's chapter of Kappa Sigma Fraternity, is shown in Ottawa on Aug. 30, 2018. Photo by The Canadian Press/Fred Chartrand
Previous story
Next story

In light of the #MeToo movement, some fraternities in Canada say they want to provide training to their members on matters of consent and sexual violence.

In the past year, thousands of survivors have shared their stories of rape, assault and harassment, some taking place on school campuses. No matter their religious, sexual or cultural backgrounds, most have rallied under two words: Me Too.

"There is no specific person who can hide from sexual violence... it can happen to anyone," said Brett Gilmore, president of the Concordia University chapter of Tau Kappa Epsilon Fraternity.

A fraternity has chapters on different campuses that, for the most part, self-govern their members and regulate standards, values and rituals, such as initiation rites. Although these chapters are not as popular in Canada as they are in the U.S., they are still a fixture on many campuses.

Gilmore said that it's important for him to make sure that everyone has a positive university experience, which led him to reach out to Concordia's Dean of Students' Office, the Centre for Gender Advocacy, and the Sexual Assault Resource Centre. All offer consent and sensitivity training regarding sexual violence and misconduct on campus.

He said he hopes to have all members trained by the end of the school year.

"Essentially, we want to make sure that if we are in a situation where a male and a female are over-intoxicated, we are able to take the necessary steps to make sure they are in a safe place," Gilmore said.

When it comes to consensual sexual activities, he said not everyone understands body language, which is why it's so important to have discussions about the fact that "only yes means yes."

OurTurn Carleton, a student-led advocacy group dedicated to combating sexual violence on Canadian post-secondary campuses, founded the National Our Turn Action Plan in 2017, which provides guidelines for student unions across the country on how to prevent sexual violence, support survivors and advocate for policy changes on campuses.

The group provides training to students at Carleton University in Ottawa. During a two-hour session, participants are given information about consent, sexual violence and rape culture, directly applicable to campus events and student life, said OurTurn Carleton vice-president Brittany Galler.

Some fraternities and sororities at Carleton University have been positively responding to the training, she said.

"They were just so involved in the conversation and they weren't afraid to ask questions that they were a little unsure on, or were in the grey area," she said.

"It's very heartwarming to know that people are actually out there keeping an eye out for you," said Galler, who recently joined a sorority.

"When you speak about fraternities, you are speaking about young men from the age of 17 to about 22 years old," said Curtis, who is also president of the Carleton University Greek Council.

"A lot of guys are moving away from home for the first time and gaining some sort of independence," he said, adding that for some of them, it means they'll be dealing with issues of consent and sexual violence for the first time.

"We have a huge opportunity to start having these conversations as many times as possible to get a better awareness of what consent is," Curtis said.

"Everyone has heard those big stories that come out about very unfortunate situations that have happened in fraternities across the world, from hazing deaths to alcohol-related stuff," he said, adding that it adds to the stigma around fraternities.

Curtis said enrolling members in such training will reinforce the importance of having these discussions and will help ensure the members of his chapter have a base knowledge and ability to provide support to their peers if needed.

The manager of the office for sexual violence support and education at Ryerson University in Toronto said it's "absolutely great that they are having these conversations."

But, Farrah Khan also said students and fraternities need to get to a stage where they're having deeper discussions about issues of consent and violence.

"I want it to get to conversations about what we do when we find out that someone we care about, someone we live with, or someone we party with, has sexually assaulted someone."

"There are so many things that need to happen, and it's a culture shift," she said.

"It is not only about a workshop, it's also about being committed throughout the year and continuing to have these conversations."