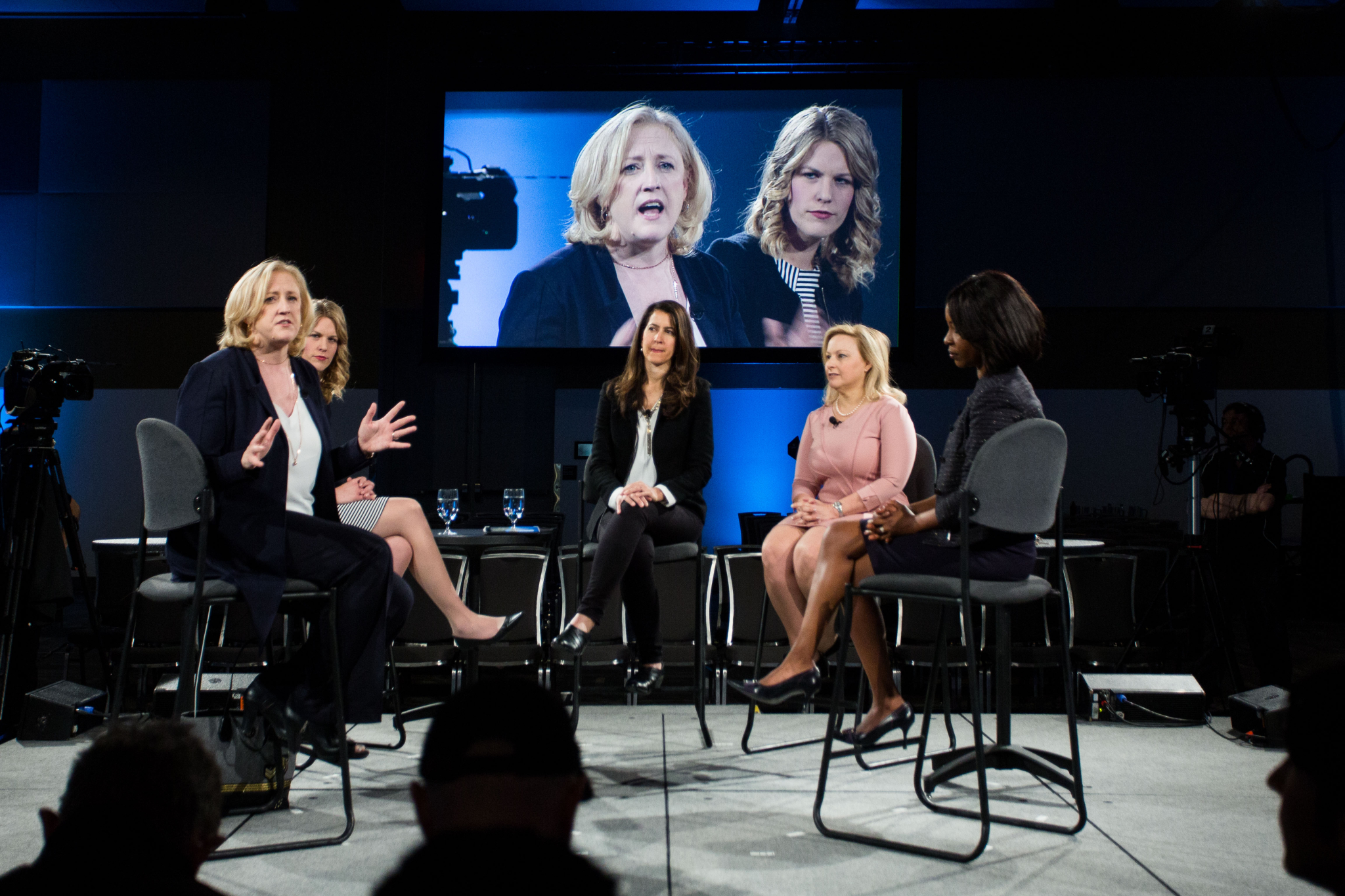 Tory MP Lisa Raitt (left) speaks during a panel on conservatism and feminism at the Manning Networking Conference in Ottawa on Fri. Feb. 9, 2018. Photo by Alex Tétreault
Previous story
Next story

As a panel of female conservatives dove into the politics of the #MeToo movement, a former member of Parliament suggested women who seek mental health counselling after exposure to verbal sexual harassment are "overreacting."

Stella Ambler said women need to stop thinking of themselves as "victims" and should "have some thick skin" when confronted by inappropriate comments in a political work setting. Ambler was the Tory MP for Mississauga-South 2011-2015.

"I'll tell you, one of the things that bothers me about the #MeToo movement is that women are saying things like, 'I'm terrified, I froze.' Now if you're in a situation of genuine sexual assault, any reaction is appropriate and you should never be judged on it," said Ambler in Ottawa on Friday.

"But if someone, you know, calls you 'yummy' in an elevator and that traumatizes you... and you have to go to therapy for seven months, frankly, you're overreacting... so let's be clear that women — we can't be weak on this."

Her comments received applause from a predominantly conservative audience at the annual Manning Networking Conference. She spoke on a panel about feminism and conservatism, alongside Tory MPs Lisa Raitt and Rachael Harder, public affairs strategist Denise Siele and Rachel Curran, a former policy advisor in Stephen Harper's government.

Encouraging women to run for politics

None of the allegations have been tested in court, and Ambler said women need to understand the difference between "a jerk" and someone who is "actually" hurting them. Her take on the #MeToo movement took place in the context of a broader discussion about how to encourage and support women in politics.

When in comes to making women feel safe, panelists suggested having designated party members that women can to go if they feel uncomfortable in a work or social setting, and encouraged both men and women to speak up when they see harassment.

"But if someone, you know, calls you 'yummy' in an elevator and that traumatizes you... and you have to go to therapy for seven months, frankly, you're overreacting," said former MP Stella Ambler.

"Like it or not, Ottawa is a town that is driven and fuelled by gossip, and that's one of the things that can really hurt people in terms of wanting to stay and be an MP or work on the Hill, and they'll end up just leaving and we'll lose that talent," said Raitt.

"It is about having... that kind of network around you to help so that you're not stuck by yourself in an awkward situation or an awkward conversation that you don't want to be in, and you feel that you can't push back and say no."

Taking the mystery out of the Tories

To encourage more women to run for politics, they agreed that men should leverage their network — and money — to support female candidates. It's a better approach, said Harder, than a gender parity quota on Parliament Hill, such as the one in Prime Minister Justin Trudeau's cabinet.

Denise Siele, who was born and raised in Kenya, said that in order to appeal to a broader spectrum of female candidates — especially in "racialized" communities — the federal Tories need to do a better job of "demystifying the Conservative party." That means keeping the message simple, she explained, communicating values and success, and opening up new networks and opportunities to voters and candidates.

Raitt, deputy leader of the federal Conservatives, admitted that the party has some communication challenges, but will do more outreach to people outside of the party. Either way, all the panelists encouraged any woman who is considering a career in politics to take a leap of faith.

"We have to be brave, we have to be courageous, we have to exercise faith," said Harder, rookie MP for the Alberta riding of Lethbridge. "We have to step up and say 'yes,' because once you say yes, there’s this incredible machinery that comes out to support you."