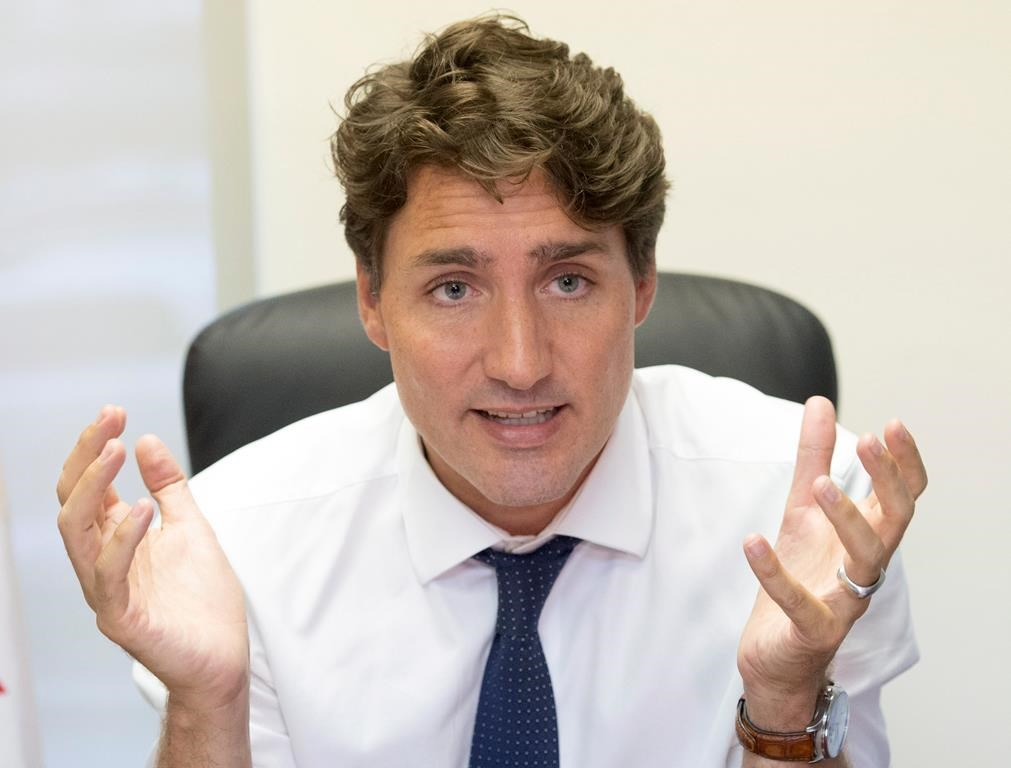 And he vowed that Canada won't buckle on the issue at the NAFTA talks.

The vexing question of greater U.S. access to Canada's protected dairy sector is now pivotal as the NAFTA negotiations in Washington draw closer to President Donald Trump's Friday deadline for a three-country deal.

A concession on dairy — which is explosive politically in Canada — is one of the few cards the Trudeau government has left to play at the bargaining table after the U.S. and Mexico reached their own side deal on Monday.

Experts say Trump has not specifically set his sights on dismantling supply management, and is more angered with a new classification of milk products that Canada introduced two years ago that he says has undercut U.S. exports and hurt his country's farmers.

The U.S. is seeking more market access for its milk products to the protected Canadian market. Trump himself has avoided directly calling for the dismantling of supply management during his frequent attacks on Canadian dairy, including during Monday's announcement with Mexico.

Indeed, U.S. Agriculture Secretary Sonny Perdue said during a June visit to Prince Edward Island that "it's not our desire to do away with" Canadian supply management.

However, Trudeau cast the issue in black-and-white terms as he sidestepped a question on Wednesday about whether Canada would be willing to open up its market to more U.S. dairy.

The prime minister simply repeated his mantra that his government will protect supply management at all costs.

"That is something that we have made very, very clear to the Americans even though it has been very obvious that the Americans want us to get rid of supply management," Trudeau told reporters at an event in northern Ontario.

"I have said that is not acceptable to us."

In the past, Trudeau has suggested he'd be willing to bargain with Trump on dairy. He gave a more nuanced response during an interview with an American broadcaster in June.

"I think they want a better deal on their auto sector from Mexico, and I think they want more access on certain agriculture products like dairy to Canada," Trudeau said on NBC's Meet the Press.

At that time, Trudeau said the two sides were moving towards "flexibility in those areas that I thought was very, very promising."

The interview took place days after Canada and the U.S. broke off formal negotiations — talks which resumed Tuesday — after the government presented a slimmed-down set of proposals aimed at getting a quick deal.

Canada had already granted the U.S. limited access to its dairy market as part of the failed Trans-Pacific Partnership deal. The agreement would have given the U.S. and 10 other Pacific Rim countries access to 3.25 per cent of Canada's dairy market.

Trump pulled the U.S. out of the TPP, calling it a bad deal.

The Trudeau government has also granted European cheese makers access to an additional 1.5 per cent of Canada's dairy market under its comprehensive free trade deal with the EU.

Meredith Lilly, a Carleton University trade expert, said while the government is committed to preserving supply management, it still has the room to open up its market to the Americans.

"There is room to negotiate some kind of concession," she said, but added: "There are cumulative effects of each bit of access that is granted through various trade agreements."

Martha Hall Findlay, the president of the Canada West Foundation think-tank, said the time has come for the government to simply get rid of supply management because it is protecting farmers at the expense of other workers, including those in the auto industry.

"The system that was set up decades ago had good purposes because there were hard working farmers who were really struggling," the former Liberal MP said in an interview.

"That is long gone and it has now become a system that is supporting a very small number of very privileged people in our society, and it needs to go."

The potential political cost of bargaining with supply management was evident on Wednesday as Quebec's Liberal leader, and current premier, Philippe Couillard said there would be "serious political consequences" if there were any further tinkering with the system.

Without mentioning the current Trudeau government directly, Couillard signalled Quebec's disapproval if Canada grants greater access to its dairy market to get a deal by Friday.

"If someone believes they can ram through Quebec and make a concession on dairy without our consent, politically it is going to be a disaster," he said while campaigning during his province's provincial election.

— with files from Morgan Lowrie in Montreal

Trudeau says he's encouraged by what he calls NAFTA progress