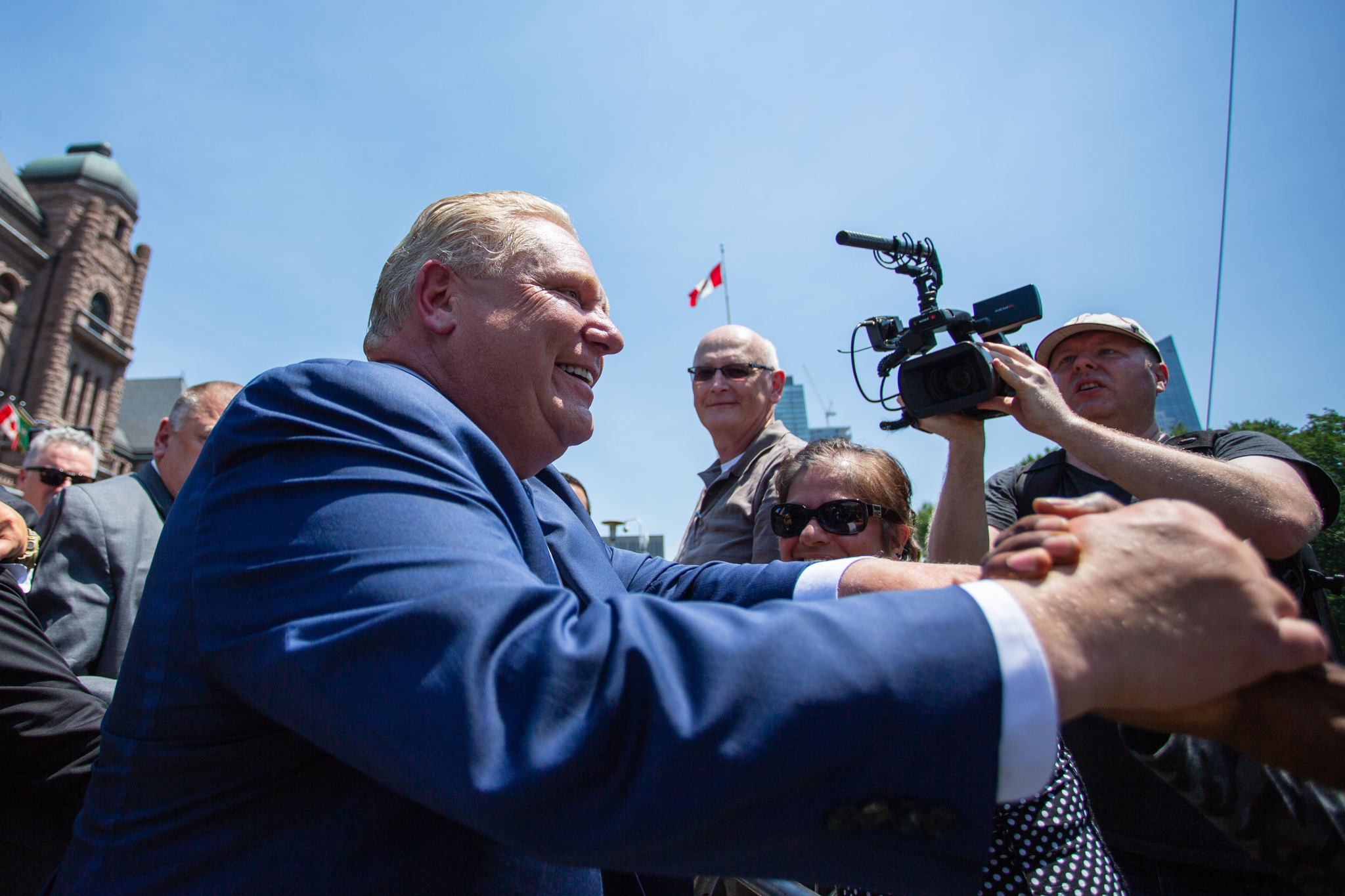 Tens of trillions of dollars in economic gains lie in wait as the ultimate prize for nations that can successfully put a price on pollution, kill fossil fuel subsidies and take other steps to tackle climate change — but time is running out.

That’s according to a new report by a broad coalition of governments, influential think tanks and top businesses headed by former Mexican president Felipe Calderón, as well as the CEO of Unilever, the president of the Royal Economic Society and other finance and government notables.

Their report pegs the reward for climate action at a staggering $26 trillion through 2030 — more than the GDP of the U.S. and Japan combined — but singles out inaction or "backsliding" like that seen in Ontario, Canada's most populous province, as a threat that could lock the planet into a high-polluting, unequal future.

“The train is fast leaving the station...this is our ‘use it or lose it’ moment,” reads the report released Sept. 5 and produced on behalf of the Global Commission on the Economy and Climate.

“The laggards are not only missing out on these opportunities but are also putting us all at greater risk. Over US $26 trillion and a more sustainable planet are on offer, if we all get on board. The time to do so is now."

Report calls out Ford for 'backsliding' on climate

The report, titled “Unlocking the Inclusive Growth Story of the 21st Century,” was overseen by a commission made up of over two dozen leaders in the field including former high-level government officials and business leaders, and was created in 2013 by seven countries in South America, Africa, Asia and Europe.

Its warning about climate inaction comes as political groups in the West, such as the Trump administration in the U.S. and the Ford government in Ontario, trample on climate action gains by their predecessors that were helping to usher in greener economies.

The federal Conservative Party has also vowed to kill the Trudeau government’s plans to put a price on pollution nationwide if they get into power, while the United Conservatives in Alberta, home to Canada’s oilsands, are planning to do the same to a provincial carbon tax, after their respective 2019 elections.

“The train is fast leaving the station...this is our ‘use it or lose it’ moment,” reads the report released Sept. 5 and produced on behalf of the Global Commission on the Economy and Climate. @ottawacarl reports.

"Despite the expansion of carbon pricing systems recently, in many regions, there is still strong political resistance to implementing any new taxes in general," reads the report.

Citizens' unwillingness to accept carbon pricing is exacerbated, it adds, "if past efforts to introduce carbon pricing systems in a given jurisdiction have failed or been poorly communicated."

"The inherently political nature of carbon markets often results in a high level of political uncertainty and challenges, and the threat of backsliding is real. For example, a newly elected provincial government in Ontario, Canada in 2018 has announced it will be looking to cancel the cap-and-trade scheme and fight the national carbon tax scheme."

Killing fossil fuel subsidies has also been "particularly challenging in many countries," the report reads, in some cases leading to major protests and strikes. In Canada, the Trudeau government has promised to get rid of subsidies by 2025 and announced earlier this summer it had agreed to a close examination.

'The next two to three years are a critical window'

The report calculated its $26 trillion figure by using a global macro-econometric model run by a team at U.K.-based Cambridge Econometrics.

It also says that ensuring that women play a central role in the low-carbon transition will be central to its success.

"Analysis produced for this report found that bold action could yield a direct economic gain of US $26 trillion through to 2030 compared with business-as-usual. And this is likely to be a conservative estimate," the report reads.

Making these changes would result in widespread changes to the planet’s energy systems, the design of cities, the use of food and water, and the regulation of industry. It would result in over 65 million new low-carbon jobs by 2030, and the generation of government revenues per year in the trillions of dollars, as well as avoiding over 700,000 air pollution-caused premature deaths.

But governments have to act fast.

“The next two to three years are a critical window when many of the policy and investment decisions that shape the next 10-15 years will be taken,” the report states.

Not only would climate action result in the gains described above, it would also limit dangerous climate change and avoid hundreds of billions of dollars in potential losses according to the report — not to mention over 140 million climate migrants by 2050, or more than double the total number today.

“With each passing year, the risks of unabated climate change mount. The last 19 years included 18 of the warmest years on record, worsening food and water security risks and increasing the frequency and severity of hazards such as wildfires,” the report reads.

“Disasters triggered by weather-and climate-related hazards were responsible for thousands of deaths and US $320 billion in losses in 2017. Climate change will lead to more frequent and more extreme events like these, including floods, droughts, and heat waves. It is increasingly our ‘new normal.’”

The seven governments that were behind the group that developed the report are the United Kingdom, Colombia, Ethiopia, Indonesia, Norway, South Korea and Sweden.

Members of the commission overseeing the report “endorse the general thrust of the arguments, findings, and recommendations made in this report, but should not be taken as agreeing with every word or number,” it states. They also serve “in a personal capacity,” meaning the institutions they represent don’t necessarily endorse the report as they do.

Vancouver Island really ought to secede. Crazy, vicious white people seem to be taking over every where else in the country.

I would say the dynamic team

I would say the dynamic team of McKenna and Trudeau are back sliding the most. From a pre 2015 federal election promise to wean Canadians off of fossil fuels to a post election announcement by sunny ways saying, "We can't leave it in the ground."

So Ford complains about

So Ford complains about asylum seekers coming to Canada while taking steps to create millions of climate refugees. What a dolt.

Ford and his self

Ford and his self congratulatory confreres are so elated by their electoral success(?) they are running around with windmills in their heads, instead of windmills on the ground and their eyes fixed on the financial prize of Power, Power, at last, Power! These people are so ignorant they haven't the brains to look at the world around them and perceive the truth. Those who elected them are equally ignorant and fearful of the rapid changes that we must all wake up and adapt to - or die.