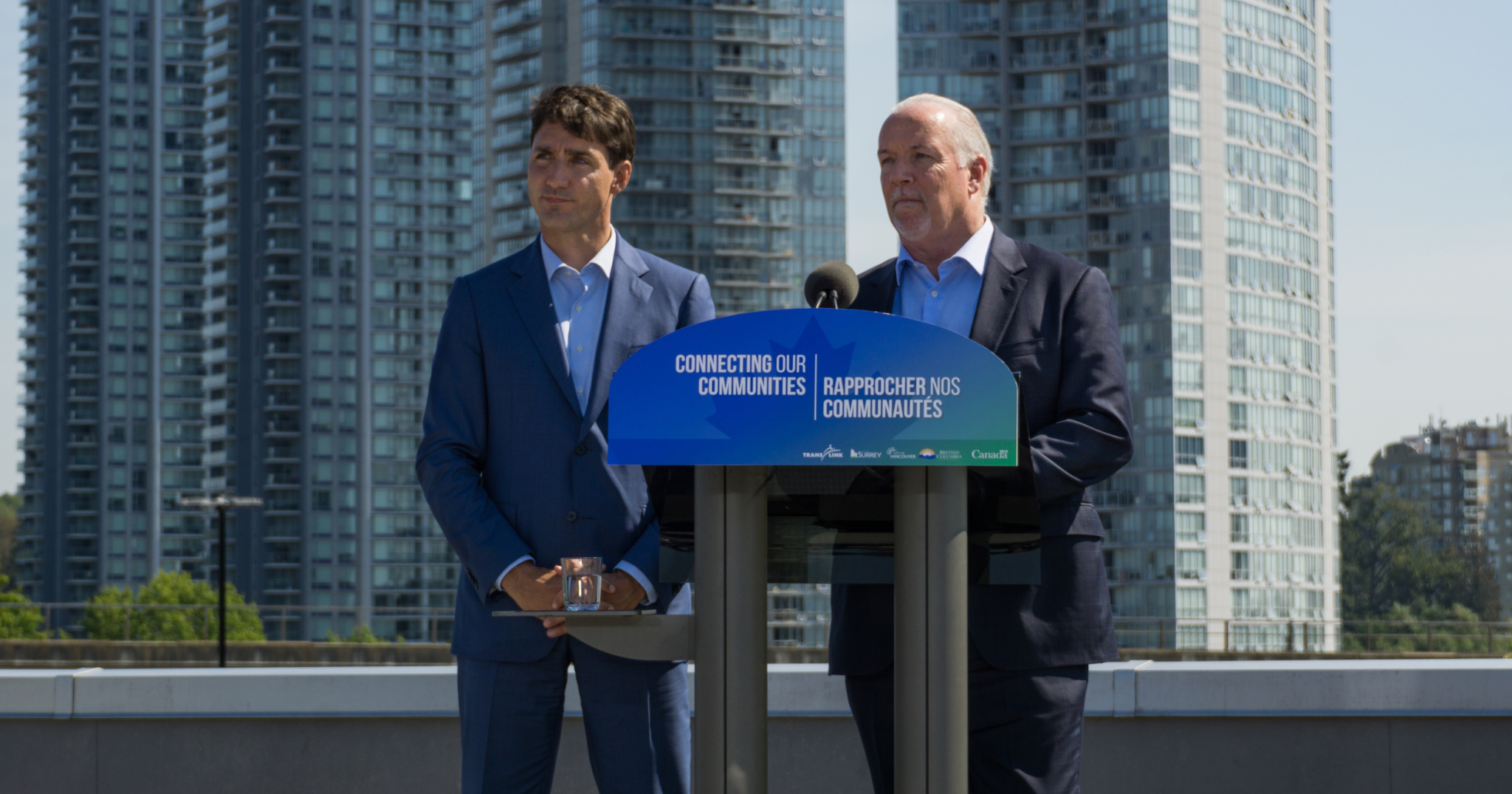 Prime Minister Justin Trudeau stands next to B.C. Premier John Horgan as the two answer questions on Trans Mountain during a press conference on September 4, 2018. Photo by Michael Ruffolo
Previous story
Next story

Prime Minister Justin Trudeau drew some laughter from a crowd of journalists and staffers as he gestured to the premier of B.C. in the middle of a news conference.

“Stay here,” Trudeau said as B.C. Premier John Horgan started to walk away from the podium at a parking lot at the Simon Fraser University campus, overlooking the SkyTrain, where they were gathered to speak about public transit on Sept. 4.

But instead of talking about the SkyTrain, the two men remained together at the podium to discuss a completely different issue.

For months, both leaders have been key figures on different sides of a national debate about major industrial projects, environmental oversight and Indigenous rights as the Trudeau government attempts to get a major west coast oil pipeline and tanker project, the Trans Mountain expansion, on track.

Their light-hearted, but awkward exchange reflects some of the key differences and opposing views that have split Canadians about proposed expansion of fossil fuel production in Canada at a time when scientists are saying it's time to start a transition to prevent worst-case climate change scenarios.

Just a few days earlier, the Trans Mountain debate reached a fevered pitch over two major developments — a Federal Court of Appeal decision quashing Trudeau's approval of the pipeline expansion due to a flawed review and a failure to adequately consult First Nations, and the closing of a deal that transfers ownership of the existing pipeline system and expansion from Texas company Kinder Morgan into the hands of taxpayers for $4.5 billion.

B.C. Premier John Horgan and Prime Minister Justin Trudeau and others speak at a news conference in Surrey, B.C., on September 4, 2018. Photo by Michael Ruffolo

Despite the court ruling, Trudeau, initially standing alone at the podium to take questions, told reporters that he could still see a path forward to getting it built, by following instructions given by the court on how to resume construction.

"The court was very clear: You need to do more on the environment," Trudeau said. #KinderMorgan #Indigenous #TransMountain @Mike_Ruffolo reports.

"The court ruling indicated that we still have a little more work to do in those particular areas. And that's exactly what we're looking at: what we need to do in order to get this project done the right way," the prime minister stated.

He continued, “as we’ve said from the very beginning, you can’t make a choice between something that’s good for the environment or good for the economy. Canadians expect us to do them both together.”

That was when a CTV reporter asked Horgan to come up to the podium and answer if there was a scenario in which the federal government could convince the B.C. provincial government to change its opposition to the project.

Horgan stood next to Trudeau stating, "the prime minister and I have been working for 14 months with different perspectives on this one issue."

“For me, I’m going to continue to work with my federal colleagues," he continued. "My colleagues in the legislature will look across the mountains to our friends in Ottawa for support on things that we can agree on — and they are very very many, and the things we disagree on are very, very few."

Those very many topics of agreement included the announcement at the news conference of over $3 billion in federal and provincial funding for two rapid transit systems in Metro Vancouver. A total of 5.7 kilometres and six new stations will be added to the SkyTrain line into Burnaby. And the Surrey-Newton-Guilford Light Rail Transit project will create the first light rail transit system in British Columbia. The LRT will span 10.5 kilometres and have 11 stations.

Trudeau and Horgan both sidestepped questions from a Bloomberg reporter. The prime minister would not answer whether construction of the Trans Mountain expansion would begin before the next election. When Horgan was asked if there could be a middle ground for Trans Mountain's expansion, he deflected the question by saying he would "see how it unfolds."

Horgan added that the "bigger challenge" was for governments to recognize Indigenous rights and titles and the fact that reconciliation needed to take place.

Trudeau, meanwhile, emphasized the shared goals between B.C. and the federal government.

Trudeau nodded along in agreement with Horgan as the premier spoke about protecting shared values and the importance of working with Indigenous nations, protecting the environment, endangered southern resident killer whales, and B.C.'s "iconic salmon."

The two political leaders shook hands before leaving the podium.

The federal government and its official Opposition have traded barbs over the past week in the wake of the Federal Court of Appeal ruling on the Trans Mountain expansion. Trudeau's Liberals pointed to the pipeline review process under former prime minister Stephen Harper, while the Conservatives blamed Liberals for how it handled the process after forming a new government in 2015.

Trudeau criticized the Conservative government again on Tuesday, saying they "tried to fast track everything it could by marginalizing Indigenous voices and by ignoring science."

On Wednesday, Trudeau told a radio station in Edmonton that his government wasn't planning to use any "tricks" or a quick fix to get around the court ruling.

“Using a legislative trick might be satisfying in the short term, but it would set up fights and uncertainty for investors over the coming years on any other project, because you can’t have a government keep invoking those sorts of things on every given project,” he told 630 CHED on Wednesday, prior to a meeting with Alberta NDP Premier Rachel Notley.

“People want to know that we are doing things the right way for the long-term — that jobs that get started will continue and won’t get stopped by the courts," he said. "That’s the change we are focused on making.”

Trudeau also appeared to hint that Ottawa was planning to follow the court's direction, rather than appealing its ruling to the Supreme Court as Alberta Premier Rachel Notley had urged him to do last week.

But later in the day, still in Edmonton, Trudeau said the government was "looking at what an appeal would look like and what it would mean."

Notley has called for a "timely solution that restores the beginnings of investor confidence that we were pleased to start seeing in Alberta," The Canadian Press reported on Thursday.

The NDP premier said that timing was everything, especially at a time when many people are wondering if they'll be able to work over the next few days and weeks.

Notley, who has also singled out the Harper government for introducing changes to the review process that have triggered delays, said that the federal government must do proper consultation with Indigenous peoples and address concerns about the federal pipeline regulator, the National Energy Board, which was responsible for the review of the Trans Mountain project.

"We cannot be held hostage to a regulatory merry-go-round that never ends," she said, according to a report by CP.

Conservative politicians, including those who were in power as the federal review made what the court described as its critical mistake, have criticized the court decision.

Alberta Opposition Leader Jason Kenney, a former member of Stephen Harper's cabinet, said the Federal Court of Appeal was moving the goal posts, and changing the rules and making "it abundantly clear that the Federal Court of Appeal has no regard for the real-world economic impact this decision will have on ordinary Canadians' lives and livelihoods," he said on Aug. 30, after the ruling was released. "It is incredibly disappointing to see our judicial branch working against the best interests of the nation."

The main lobby group representing Canada's oil and gas companies, the Canadian Association of Petroleum Producers (CAPP), has also expressed its displeasure with the ruling.

“CAPP is frustrated by further delays to the construction of the Trans Mountain expansion pipeline (TMEP) as the need for increased market access, and fair prices for our natural resources, remains critical." said CAPP spokeswoman Elisabeth Besson in an email statement sent to National Observer. "Continued uncertainty regarding Canada’s regulatory process is not in the country’s best interest. It deters foreign investment and results in additional delays, cost overruns, and more red tape. The Canadian government must institute a simpler regulatory framework that provides absolute clarity and certainty needed for investment. We continue to emphasize a good process is an efficient process — one that ensures that resource development projects move forward."

CAPP and the Canadian Energy Pipeline Energy Association were among the key industry lobby groups which pushed the former Harper government to introduce the regulatory system in 2012 that has led to the flawed NEB review.

Besson added in her statement that CAPP's member companies "support meaningful engagement with Indigenous peoples for the responsible development of our energy resources."

But privately, in a message sent to its supporters who are part of the lobby group's activist arm called Canada's Energy Citizens, CAPP said the court was "wrong" when it concluded the review was "flawed" and instructed the government to engage in more meaningful consultations with First Nations.

"We need to let decision-makers know the Federal Court of Appeal was wrong when it made the ruling that stopped construction on the Trans Mountain Expansion pipeline," said an email from Canada's Energy Citizens, sent on Sept. 2 that invited supporters to slam the court ruling in an online poll on the website of the Vancouver Sun.

Besson didn't respond to a follow up question asking whether the statement in the Energy Citizens email was CAPP's official position.

I see the petroleum industry

Whatever CAPP may say, the

Whatever CAPP may say, the court was right to put Indigenous rights to meaningful consultation, and the lives of endangered orcas, over the selfish interests of corporations and colonialism.

Investors do indeed need to

Investors do indeed need to have confidence - confidence that if they invest in fossil-fuel infrastructure they will lose their shirts.