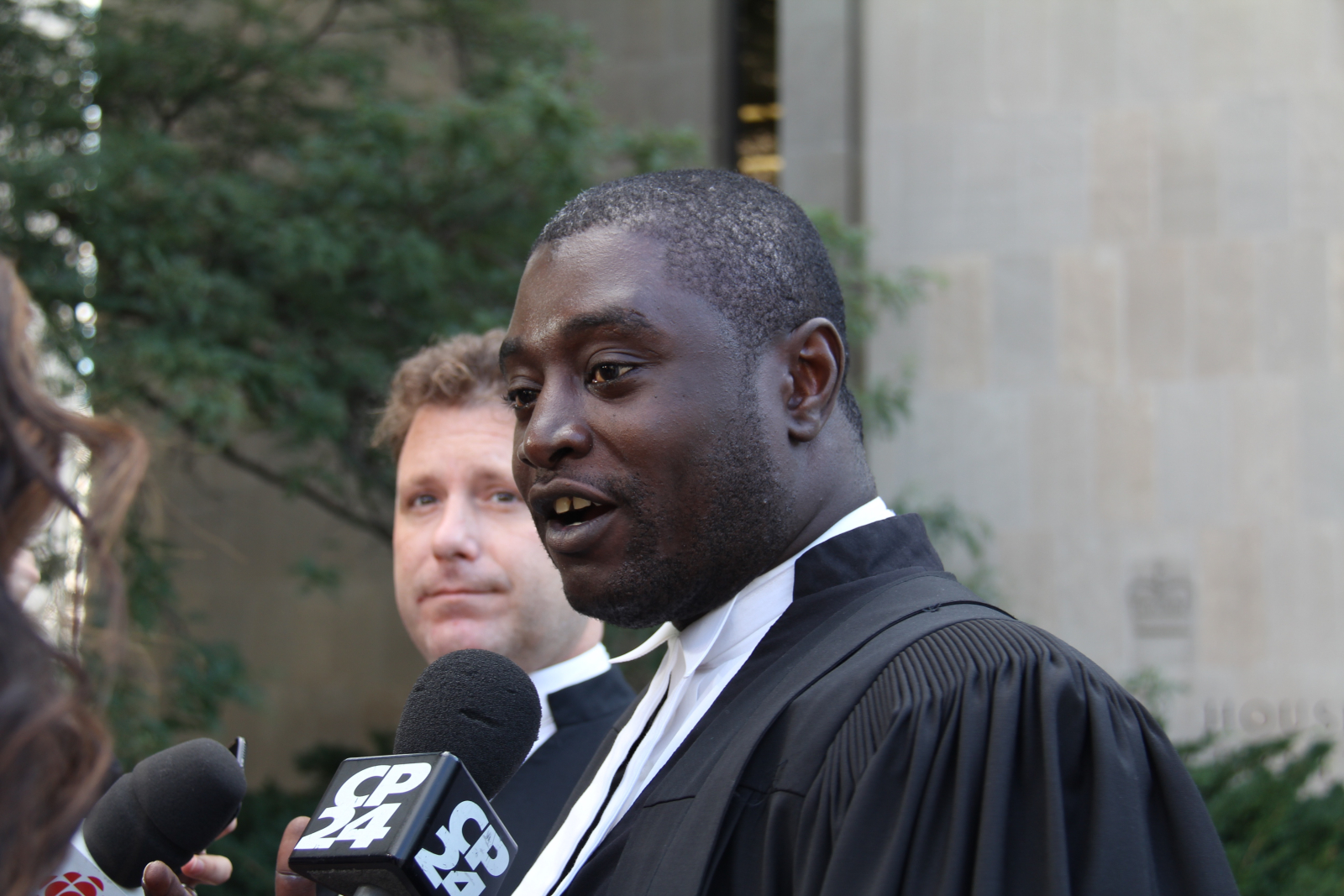 Three justices should disregard the “looming nightmare” of the notwithstanding clause as they decide whether or not to allow the Ontario government to slash Toronto’s city council, a lawyer representing residents and council candidates said Tuesday.

“The government chose to interfere in the election for no good reason,” legal counsel Don Eady told a packed courtroom.

A panel of Court of Appeal justices, chaired by Alexandra Hoy and accompanied by Robert Sharpe and Gary Trotter, heard arguments Tuesday to stay Superior Court Justice Edward Belobaba’s ruling that a Ford government bill to reduce Toronto’s city council wards from 47 to 25 in the midst of municipal elections is “unconstitutional.” Following Belobaba’s ruling, Ontario Premier Doug Ford’s government has threatened to invoke the notwithstanding clause for the first time in Ontario’s history.

If the Court of Appeal allows the stay, the Ontario government will have no need to invoke the notwithstanding clause, or Section 33, and will halt debate on its controversial bill, Crown Counsel Robin Basu said Tuesday. Otherwise, the legislation is expected to pass Thursday.

The Court of Appeal’s decision is expected to be released Wednesday morning.

As lawyers made their arguments in Toronto, activists confronted government members attending the International Plowing Match in the village of Pain Court, Ont. about 300 kilometres southwest of the city with a banner that read, “Don’t plow our charter!”

Eady, who is representing resident association members and intervening council candidates, including Jennifer Hollett and Lily Cheng, argued Tuesday that the province has failed to justify meddling in Toronto’s Oct. 22 election. He said the attorney general’s counsel had not shown that there was a pressing need for the Better Local Government Act – or Bill 5 – or that it would result in a more effective local council.

Belobaba struck down Bill 5 because he said the new law, introduced in the course of an ongoing election, would infringe on voters’ and candidates’ charter rights to freedom of political expression.

Belobaba’s ruling was rendered at 8 a.m. on Sept. 10. At 2 p.m. the same day, Ford’s government said it would invoke Section 33, or the notwithstanding clause – a Charter provision that would provide a pathway to overruling the judge’s decision, in a revised iteration of the law, Bill 31.

Chaos ensued, with a spate of emergency legislative sittings, including a Saturday session and one overnight on Sunday. Hundreds of people descended on Queen’s Park to protest the legislation and Ford’s interference with a municipal election.

“The government chose to interfere in the election for no good reason,” legal counsel Don Eady told a packed courtroom. #notwithstandingclause #onpoli #bill31

After midnight Sunday, through 6 a.m. Monday, MPPs trickled out to address the crowd, which at a point was in a standoff with police, after the public galleries were cleared and people were barred from entering the legislative building.

By dusk Monday, Bill 31 had received its requisite 6.5 hours of debate, getting through second reading.

Toronto’s city clerk, Ulli Watkiss, has said she is no longer able to administer a fair election given the shifting goalposts.

“Uncertainty is the cause of the clerk’s troubles,” said Crown Counsel Basu, arguing that the stay would alleviate her concerns.

Basu said that Toronto’s city clerk is ready for either election – whether there are candidates for 47 wards or 25 – but can’t do both, referring to Watkiss’s affidavit.

Watkiss filed for intervenor status and has hired outside legal representation.

If the province is seeking certainty, it should “withdraw the stay and appeal and allow the election to proceed with a constitutionally valid 47-ward system,” said lawyer Howard Goldblatt, who is representing council candidates and Women Win TO.

“It’s not simply about wasted printing of signs,” he told the court. “It’s about the government interfering in the platform once it was established.”

Among those in the hearing room Tuesday was NDP MPP Jessica Bell, who stood with members of the public behind the benches.

On Monday, Bell presented a freedom of information request in the legislature, showing that the province’s privacy officer found “no records responsive to (her) request” for evidence of consultation on Bill 5.

The Canadian Taxpayers Federation has intervened on the province’s side, though its federal director said Tuesday the organization is not taking a position on the notwithstanding clause.

“When we decided to intervene on the application it was not something that had entered our mindspace,” Aaron Wudrick told National Observer. “There are plenty of other people that have views on that, and personally I see the argument for and against it. But it's just not really our wheelhouse. The reason we intervened in this application is, we support the general idea of a smaller council means taxpayer savings, so that's why we intervened.

“We don't want to get dragged into a much broader constitutional fight.”

Liberal MPP Nathalie Des Rosiers called on Attorney General Caroline Mulroney to resign on Sept. 11, days before 400 members of the legal community implored her to rebuke the use of Section 33. Des Rosiers is the Ontario Liberal Party’s legal critic and a co-author of the Oxford Handbook of the Canadian Constitution.

“What this government suffers from is a severe form of constitutional arrogance,” said Eady, who alluded to a moment in the Aug. 31 hearing when Crown counsel mentioned the province has the authority to abolish the city, if it wished.

“If the confusion and chaos is of the province’s making, it’s not your job to save them from themselves,” he told the Court of Appeal justices.

Opposition members of the assembly have been vocal about their distaste for the Ford government’s threat to take up the constitutional instrument, calling it a dictatorial affront to democracy.

“Doug Ford has dragged our entire province into his personal grudge match against Toronto. He’s trampled our Charter rights, attacked our courts and now routinely sees members of the public thrown out of the legislature for daring to oppose him,” said NDP Leader Andrea Horwath in a statement on Sunday.

“And all for what? An attack on Toronto that won’t make anyone’s lives better.”

Montreal has tabled an emergency motion in support of Toronto, and “demanding all levels of governments to respect the autonomy of municipalities and fundamental democratic rights."

Calls for a ceasefire

The opposition’s attorney general critic called on the Ford government to stop the fight.

“Despite Doug Ford’s claims that only he – and not the courts – should be ruling on the legality of Bill 5, he’s using taxpayer money to defend his bad legislation in the courts,” said MPP and deputy leader, Sara Singh, in a statement on Tuesday.

“By insisting on pursuing his vendetta against the City of Toronto, Ford is prolonging the chaotic uncertainty that Torontonians are facing, increasing the cost of planning and re-planning the Toronto municipal election and undermining the right of the Canadians living in Toronto to have a free and fair election in Toronto.

“But it doesn’t have to be this way. Ford could end this chaos today.”

If the Court of Appeal doesn’t stay Belobaba’s ruling and Bill 31 goes through, it will also face court challenges, said Ward 29 candidate Lily Cheng, “so there’s no end in sight.”

“I just feel that democracy is very frail and because of that, I think hopefully it ignites more people to be more involved, and we just can’t take these things for granted,” she said. “It’s emotional because for any candidate, we’ve put a lot on the line and it's even harder when we continue to live in limbo.”

Selwyn Pieters, a member of candidate and lawyer Rocco Achampong’s counsel, says he’s confident that the ruling will go in their favour.

“If Bill 31 passes we are going to certainly be filing a notice of application. If the stay is granted... to the province, that question may be moot,” said Achampong.

The judges’ decision is expected at 10 a.m. EST on Wednesday.

Doug Ford did not comply with

Doug Ford did not comply with the court decision on Bill 5 and used the Notwithstanding Clause to push his policy ahead. Ironically, he is seeking a court decision on the federal carbon tax, which he will respect if it goes in his favour. In that case, the federal government should use the Notwithstanding Clause to reverse the court decision. The federal carbon tax is an essential tool (but not the only one) to reduce Canada's greenhouse gas emissions and the negative effects of a changing climate. Climate change is an existential threat, changing the number of councillors at city hall is not.