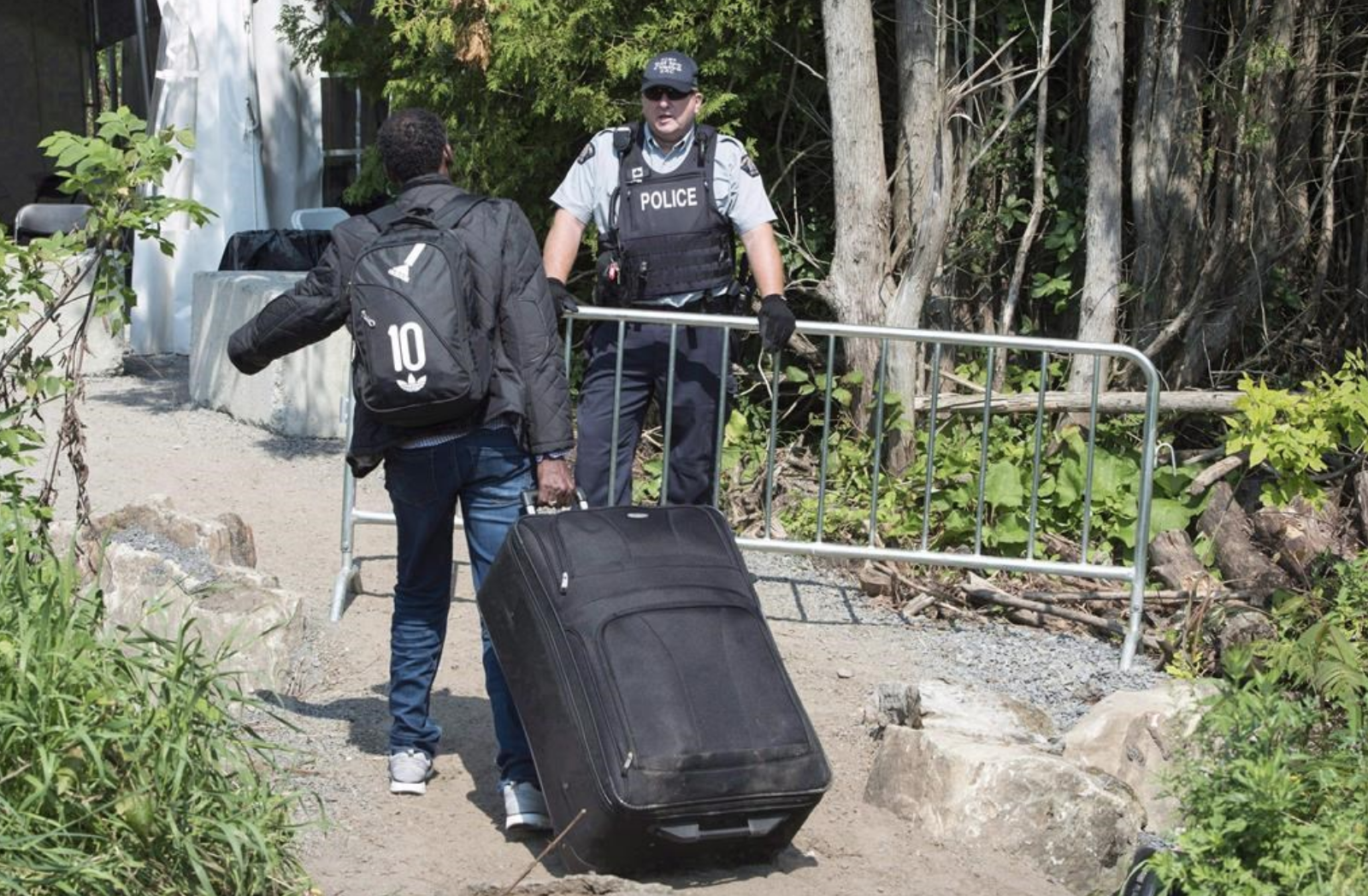 An asylum seekers, claiming to be from Eritrea, is confronted by an RCMP officer as he crosses the border into Canada from the United States on August 21, 2017 near Champlain, N.Y. Photo by Paul Chiasson/The Canadian Press
Previous story
Next story

The number of irregular border crossers seeking asylum in Canada increased slightly in August, but were far below the record spikes seen last summer.

Statistics published Tuesday by the federal government shows the Mounties apprehended 1,747 irregular migrants between official border crossings in August, a jump of 113 from July, marking the second consecutive month of increases following a downward trend that began in May.

Overall, this summer saw less than half of the just over 8,800 irregular migrants who crossed into Canada during July and August last year.

Conservative immigration critic Michelle Rempel suggested the issue of irregular migrants has not gotten better, noting that the total number of asylum seekers so far for this year — 14,125, federal data shows — is higher than during the same period in 2017 when 13,221 irregular migrants were counted.

"The problem is getting worse," Rempel said.

Rempel has repeatedly called on the Liberals to close a loophole in the Safe Third Country agreement between Canada and the United States, which has been cited as a major factor in the ongoing stream of asylum seekers crossing the Canada−U.S. border through non−official entry points.

The agreement prevents asylum seekers from asking for refugee protection when they present themselves at an official port−of−entry, which is why thousands have crossed the border on foot so they can get into the country and claim what they would likely be denied at an official entry point.

Border Security Minister Bill Blair said he has asked to meet with U.S. Homeland Security Secretary Kirstjen Nielsen to discuss ways to modernize the agreement and continued to defend the government’s handling of the border during the daily question period.

The issue of irregular border crossers has been an ongoing topic of heated debate and one that has become divisive among federal and provincial parties.

The federal and Ontario Tories have labelled the situation at the border a "crisis" and called irregular border crossers "illegal" — two terms the federal Liberals reject. The Trudeau Liberals insist the border is being managed in an orderly way and that Canada is accommodating asylum seekers as required under human rights obligations.

Ontario has also demanded millions in federal funding to cover unanticipated costs from the influx of refugee claimants and is refusing to co−operate in Ottawa’s plan to identify individuals or families willing to relocate to areas outside Toronto while awaiting the outcome of their refugee claims.

The government said a pilot project for this triage program started last week in the southwestern Ontario municipality of Chatham−Kent that will see five families relocated to the town just east of the border with Michigan, instead of Toronto. Blair’s office said the families chosen for the pilot were willing to go to Chatham−Kent, where temporary housing may be easier to find.

Speaking to reporters, Blair said the number of asylum seekers involved in this project is small, but it will allow the community the opportunity to see how families settle there and give the federal government a chance to learn from any successes — or failures.

Blair said he would have "very much preferred" to work with Ontario’s government on the triage program, rather than with individual municipalities, but he is hopeful about resolving the tension between the two governments.