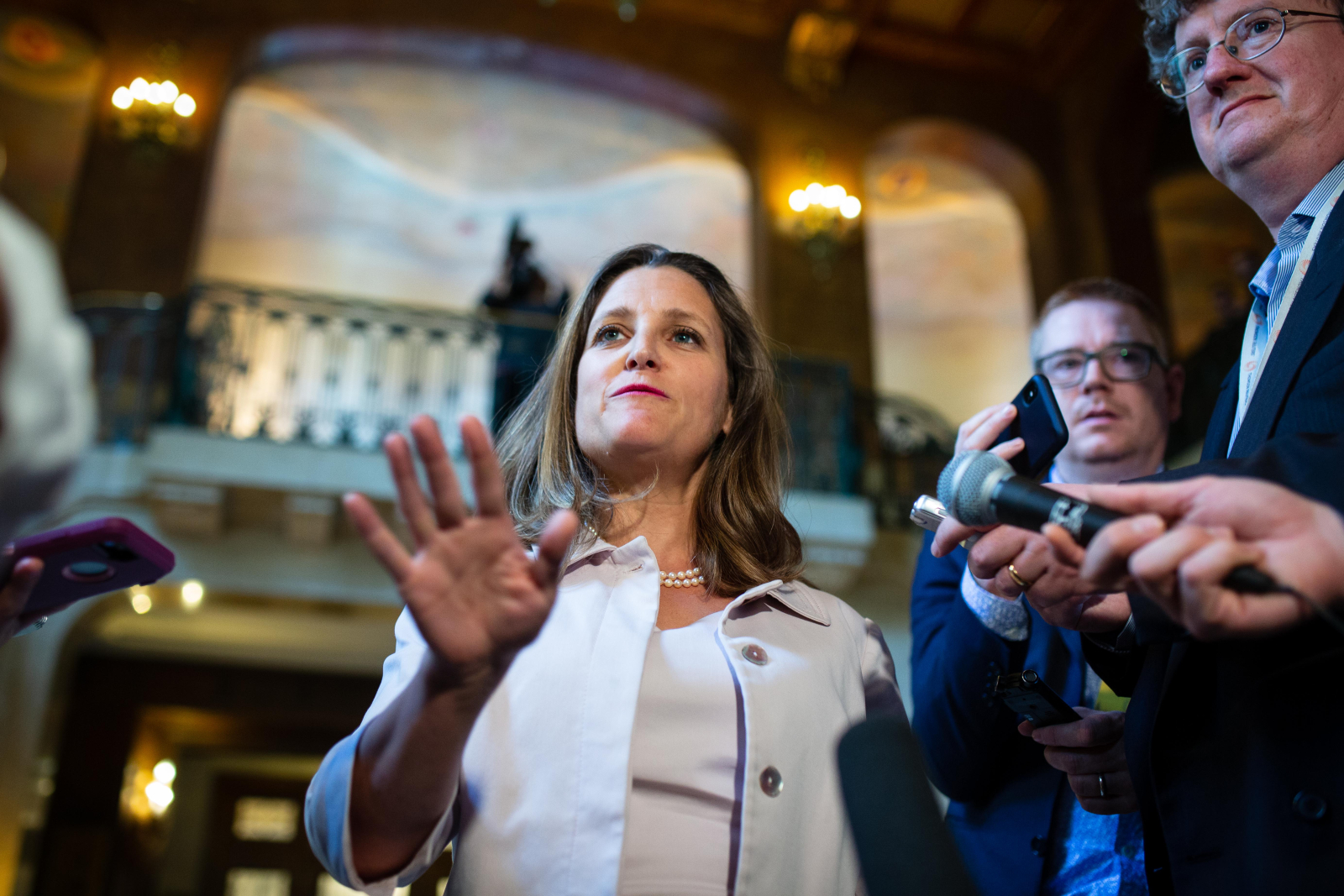 House of Representatives majority whip Steve Scalise, who represents the state of Louisiana, gave voice to a sentiment some trade observers say is building among members of Congress who suspect Canada is ignoring their timetable and dragging out the talks for its own political purposes.

"There is a growing frustration with many in Congress regarding Canada’s negotiating tactics," Scalise said in a statement that appeared timed to coincide with Freeland’s planned return to Washington.

"Members are concerned that Canada does not seem to be ready or willing to make the concessions that are necessary for a fair and high−standard agreement."

Scalise insisted Congress does indeed want to see Canada join the bilateral U.S.−Mexico deal those two countries negotiated in Freeland’s absence last month — much to the consternation of the federal Liberal government.

But it’s neither willing nor able to wait indefinitely, he warned.

"While we would all like to see Canada remain part of this three−country coalition, there is not an unlimited amount of time for it to be part of this new agreement," he said.

"Mexico negotiated in good faith and in a timely manner, and if Canada does not co−operate in the negotiations, Congress will have no choice but to consider options about how best to move forward and stand up for American workers.”

That appeared to be a response to recent indications from the federal Liberals that they won’t be held to any artificial deadlines, nor will they rush the talks to settle for an agreement that’s not in Canada’s best interests — a sentiment Freeland repeated Tuesday upon learning of Scalise’s statement.

The minister, who will resume talks Wednesday with U.S. Trade Representative Robert Lighthizer, said Canada has been negotiating in good faith throughout the process, which is about to enter its 14th month.

Negotiators have been working "extremely hard" and are committed to doing the necessary work to reach an agreement, she added — but they aren’t about to settle for just any agreement.

"It is our duty — it’s my duty — to stand up for the national interest and I will always do that."

The U.S. president, who was holding court Tuesday with his Polish counterpart at the White House, repeated what by now is a familiar, if discordant, message for Canadians.

"Canada has taken advantage of our country for a long time," he said.

"We love Canada. We love it. Love the people of Canada, but they are in a position that is not a good position for Canada. They cannot continue to charge us 300 per cent tariff on dairy products, and that’s what they’re doing."

Freeland has for weeks been cultivating the narrative that Canada is holding out for the best possible deal, but Scalise’s statement is evidence that there are those in Congress who believe the delay has been motivated by political considerations north of the border.

Ottawa has privately expressed frustration with Mexico’s decision to go it alone last month. But one source familiar with how the negotiations have progressed, speaking on condition of anonymity in order to discuss details freely, says Canada transgressed first with a surprise auto proposal last spring.

Mexico still wants Canada in a three−way deal — so much so that the language in the deal with the U.S. was written to facilitate a trilateral agreement, the source said. And Mexico feels their agreement works in Canada’s favour on a number of fronts.

The source also said Canada was fully informed every step of the way on the Mexico−U.S. deal, noting Freeland and chief negotiator Steve Verheul were kept in the loop.

Earlier this week, Prime Minister Justin Trudeau said a deal could be days or weeks away — and he also hedged a little on the grounds that the government won’t sign at any cost.

While Canada has been pushing for wording in NAFTA aimed at strengthening labour protections and gender equality, the overall negotiations are said to have stalled over Canada’s insistence that an agreement contain an independent dispute−settlement mechanism.

Supply management has been a big issue in the provincial election campaign in Quebec, home to about half of Canada’s dairy farms. Quebec Liberal Leader Philippe Couillard has warned there will be "serious political consequences" if there is any further dismantling of the protections for dairy farmers through NAFTA negotiations.

That has some trade watchers suspicious that Ottawa may be trying to get past Oct. 1, which is election day in Quebec — and also the deadline imposed by Congress for Canada to get on board with the U.S.−Mexico deal in order for it to receive congressional approval before a new government takes office in Mexico Dec. 1.

The theory is making the rounds on Capitol Hill.

"The rumblings around Washington have been Canada may attempt to push any deal beyond Oct. 1, largely due to the Quebec election," said Dan Ujczo, an Ohio trade lawyer with Dickinson Wright.

"Rep. Scalise is putting down the marker that these are real deadlines."

Intrigue, impasse persist over NAFTA as Canada-U.S. talks drag on