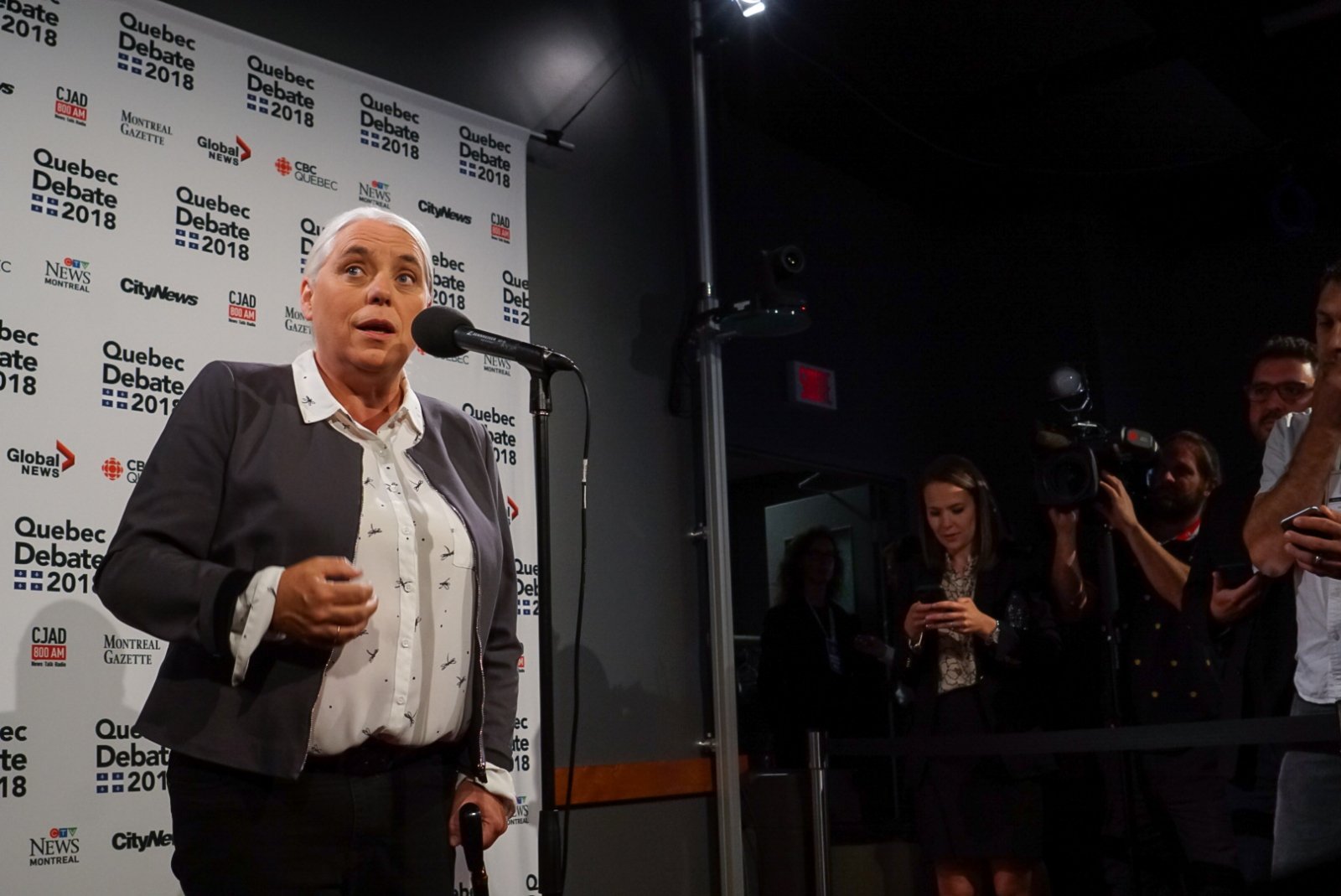 Quebec leadership hopefuls made history last night, as they took each other to task on party platforms in the province's first ever televised English debate.

It was a controversial event indeed — lots of ink has been spilled in the past few weeks about whether it was appropriate, or even necessary, to hold an English debate during the general election.

As an allophone, I completely understood this concern: English speakers represent just nine per cent of the province's population, and while I neither felt the need for, nor expected one, I saw the holding of one as an overwhelmingly positive decision.

Despite concerns from some francophone Quebecers about pandering to the linguistic minority, the fact is, when party leaders agreed to it, bilingual Quebec voters were the real winners. The English debate was the second of three planned debates before voting day on Oct. 1, which means those who speak both official languages can tune into to all three.

Many viewers and online commentators focused on Monday's ground-breaking element as Quebec's first televised English debate, aired live from Montreal's Maison Radio-Canada studio. But what I found most remarkable, was the way it highlighted how little separates English Quebecers from French Quebecers, apart from the language of course.

All voters want to know about the economy, access to health services, the education system, the environment, identity and immigration — all of which were raised last night, just as they were at the French debate last week.

No dancing around the tough stuff

All four political leaders in Montreal on Monday are seasoned. They know how to navigate uncomfortable questions and use them to ambush each other, but it’s a lot harder to do in one’s second language. As a result, and to the benefit of all Quebecers – English or French – the premier hopefuls had little leeway to skate around the issues, and were forced to be precise and less flowery with their answers.

Showing respect to a group that has been instrumental in shaping the Quebec of today is not pandering, writes @toulastake on English #qcdebate in Montreal. #polqc #quebec2018

To their credit, the debate moderators, news anchors Mutsumi Takahashi and Debra Arbec, did an exemplary job of reeling everyone in when they wandered off topic or took too much time.

During the debate, incumbent Premier Philippe Couillard repeated time and again that under Liberal rule, the budget had been balanced, allowing Quebec to now reinvest, equipped with “the means of our ambitions.” Couillard, at ease in English, was his usual collected self, even complimenting Parti Québécois Leader Jean-François Lisée on a speech he once wrote for then-Quebec premier Lucien Bouchard as his political adviser.

“When you are in pain and you get to the hospital, you don’t need a language test, you need a blood test,” he had written. A concern, by the way, that still remains top of mind for many older anglophones, I might add.

In fact, Lisée was the clear political winner of the English debate. He was consistently on point, used his time well to articulate party platforms and explained many of the PQ’s progressive and green policies.

Clearly comfortable in English, with his party third in the polls and referendum talk on the back burner, he finally had the opportunity to talk about something other than language and identity. When language did come up, it was discussed in terms of ensuring better French-language retention by anglophones in order to guarantee them better job prospects and keep them in Quebec.

One of the PQ's initiatives, an excellent one in my opinion, was the suggestion that English CEGEP students spend an entire semester in a French college of their choice, ensuring better integration and immersion in the language, and better jobs down the road.

I hope English voters were listening, because we tend to be so wrapped up in this province on linguistic and cultural identity issues, we sometimes forget sovereigntist parties like the PQ and Quebec Solidaire (QS) often have the most left-of-centre, progressive ideas. The PQ, for example, is responsible for implementing some of the most socially progressive policies this country has ever seen, such as Quebec's progressive youth protection legislation in the 1980s, and the province’s much-envied subsidized daycare system that is seen as a model by many in the rest of Canada.

If the PQ somehow managed to shed the dead weight of its old-school hardliners and partisans, who are often engaged in a kind of exclusionary ethnic nationalism that discourages non-francophones from feeling like they belong, they may even be able to sway some English voters who would otherwise support Quebec Solidaire (believe it or not, such voters exist). As it stands, it’s hard to do that when so much of the party is wrapped up in anti-immigrant talk, and weighed down by its past, which includes failed proposals in the form of Quebec Charter of Values.

Legault attacked on all fronts

Quebec Solidaire spokeswoman Manon Massé was the leader least comfortable last night. I was initially worried for her, but she performed admirably, made her points clear and displayed her characteristic sense of humour. In her limited and cautious English, she answered questions posed from voters as best as she could.

While his English was fine, Coalition Avenir Quebec (CAQ) Leader François Legault was the most prone of the leaders to wander off topic, not make his point adequately, and sometimes, not bother to respond to questions at all. Still leading the polls (although the Liberals have gained considerably on the CAQ recently), he was understandably the one most attacked and cornered by his opponents.

Lisée called his immigration policy “appalling” and Couillard repeated what he had told him during the French debate — that the proposal to decrease the number of immigrants being accepted into Quebec, and administer a language test whose failure could lead to expulsion — “scared Quebecers.” Legault was also attacked on his plan to abolish school boards, and in the wake of the ambush, seemed to struggle to articulate what he was proposing in their place.

Sparks also flew when Couillard argued that Legault's proposal to open pre-kindergarten classrooms across Quebec for all four-year-olds was unrealistic. The CAQ insists the plan, which would cost over $300 million, would open 50,000 spots in public daycare, while Couillard, in turn, insisted those numbers were radically inaccurate and that Legault was underestimating the cost.

Legault reminded Couillard that he was a doctor, while he was a chartered accountant, and therefore “knew the numbers." Couillard quickly quipped: “If my accountant had given me those statements, I would have fired him.”

Legault, whose CAQ party veers right-of-centre, attacked Couillard on the fact that thousands of immigrants per year leave Quebec, insisting Couillard could hardly call that successful integration or a solution to labour shortages. In return, Couillard, predictably, brought up Legault’s intent to administer language tests to new immigrants and expel them after three years if they fail — a stumbling block for Legault, since the proposal is consistently used against him, and he has had a hard time both explaining how it would work and ultimately justifying it.

Yes to Secretariat, no to inquiry on systemic racism

All four leaders agreed to keep Couillard's Secretariat of anglophone affairs in place, which was good to hear. Created last year at the repeated request of the Quebec Community Groups Network, it aims to better serve a minority that is an integral part of Quebec’s past, present and future.

Older English-speaking Quebecers who never learned to communicate adequately in French should not be penalized for it and deserve to be served in their language, particularly when addressing medical issues. The Secretariat acts as a link between the government and the English-speaking community throughout Québec, and a facilitator that enables the government to better serve the community.

The party leaders disagreed, however, with whether or not Quebec should have a public inquiry into systemic racism. Massé, of the progessive Quebec Solidaire, said she supported it, while the other three did not.

It’s always nice to see three white, French-speaking men deny the existence of systemic racism. Who better to detect it?

With referendum talk low on the agenda this election, it was a good time to finally have a televised English debate. Parti Québécois language hardliners don’t see it as compromising their principles and the incumbent Liberals, who have been sliding in the polls, want to ensure they win every English vote they can — support that historically, has been awarded to them with little campaigning required.

In other words, the benefits of having this debate finally outweighed the risks.

And despite what some hardcore sovereigntists might assume, I never sensed an expectation of an English debate from English-speaking Quebecers; rather, a feeling of sincere gratitude. Those who live here and have made Quebec their home know well that French is the official and common language. But, as mentioned during the debate by all leaders, English is not a foreign language either.

Showing respect to a group that has been instrumental in shaping the Quebec of today is not pandering, or endangering the progress that’s been made in safeguarding the French language. It’s about respecting all Quebecers and ensuring everyone feels at home here.

Not only is it smart politics to get your campaign message out as widely and as often as possible, it’s also healthy for Quebec society to have these conversations in both languages. It enables Quebecers who may be stuck in a political rut to examine political alternatives, and anyone who watched last the last two debates will easily conclude that – with the exception of a few specific concerns – everything discussed concerned all Quebecers.

It’s a message that some pundits and politicians intent on division conveniently choose to ignore and it serves none of us well. For that reminder alone, the English debate was worth its weight in gold.