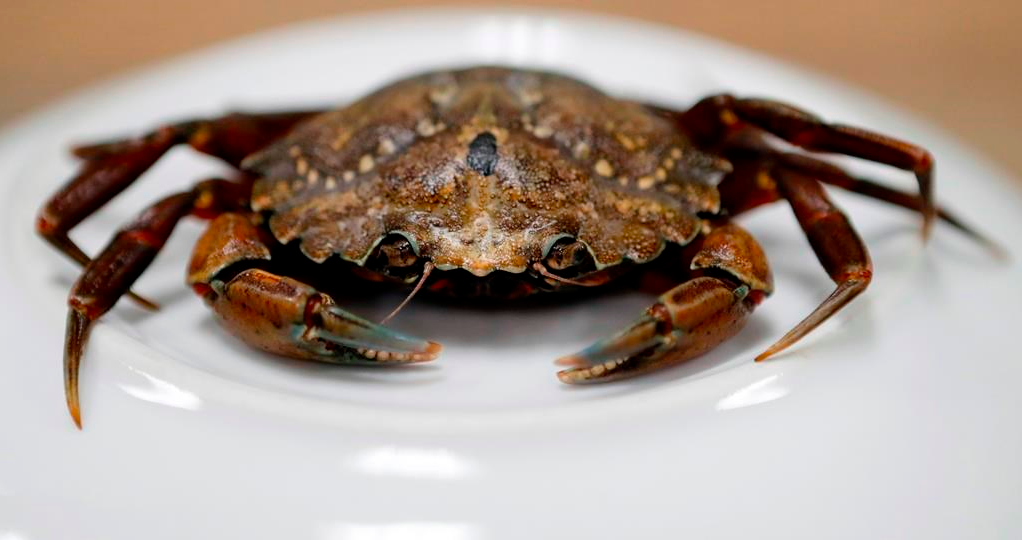 Researchers say green crabs from Nova Scotia like this one, photographed June 6, 2018, are more aggressive than their southern neighbours. Photo from The Associated Press, provided by The Canadian Press
Previous story
Next story

Canadians are known as friendly folks, but these crabby brutes migrating from Canadian waters to coastal Maine are better suited for the hockey rink.

Green crabs from Nova Scotia are the same species as their cousins that already inhabit Maine waters, but are ornerier and angrier, threatening to accelerate harm to the coastal ecosystem by gobbling up soft-shell clams and destroying native eel grass, a researcher said.

The docile green crabs shrink from a threat, while the newcomers are more apt to wave their pincers and charge.

"What we're seeing is this insane level of aggressiveness," said Markus Frederich, a professor at the University of New England.

They're each genetically distinct.

The new crab variant that originated in northern Europe is hardier and adapted to colder water than the more docile crab, which originally came from southern Europe.

Green crabs, even the docile ones, are considered a scourge that can devour soft-shell and juvenile clams. They can destroy eelgrass that provides a hiding place for juvenile sea creatures.

But the Canadian crabs take it to a new level.

Louis Logan, a University of New England graduate student, had the unpleasant task of labelling the crabs captured from Nova Scotia waters for the research.

The crabs were in no mood for games.

At a distance of 1.5 metres, the pint-sized brutes, which measure 10 to 12 centimetres across, assumed a fighting posture. Those that grabbed him were in no hurry to let go.

"Any time I went down to grab one they went to grab me instead," he wrote in an email.

One of them, in particular, would jump out of the water in its frenzy to attack.

In the lab, researchers unleashed both types of crabs on a bed of eelgrass in a saltwater pool, and the difference was stark. The Canadian invaders shredded the eel grass like Edward Scissorhands in their efforts to scarf down marine organisms seeking refuge, Frederich said.

The first round of study focused on 200 crabs from Canada, and will be published in coming months.

Further studies will focus on whether a specific gene plays a role in the aggressiveness or if a factor called hybrid vigour is in play, he said. The hybrid vigour theory suggests that crabs could be more aggressive as they establish themselves, but will mellow out later.

The quarrelsome newcomers currently comprise only about 2 to 3 per cent of green crabs crawling on the ocean floor off Maine, but those numbers are certain to grow, Frederich said.

"It will be an entirely different ball game," he predicted. "It's just a question of when more of the crabs come and out-compete the Maine green crabs."

The docile green crabs have been around for more than a century in New England waters, but they've emerged as a major problem as the Gulf of Maine has warmed. The feistier crabs arrived off Nova Scotia in the 1980s, and currents brought their larvae southward into New England waters.

Eventually, the newcomers will move farther southward. "We can't do anything about it," he said. "The only thing that we can do is learn how to live with it."