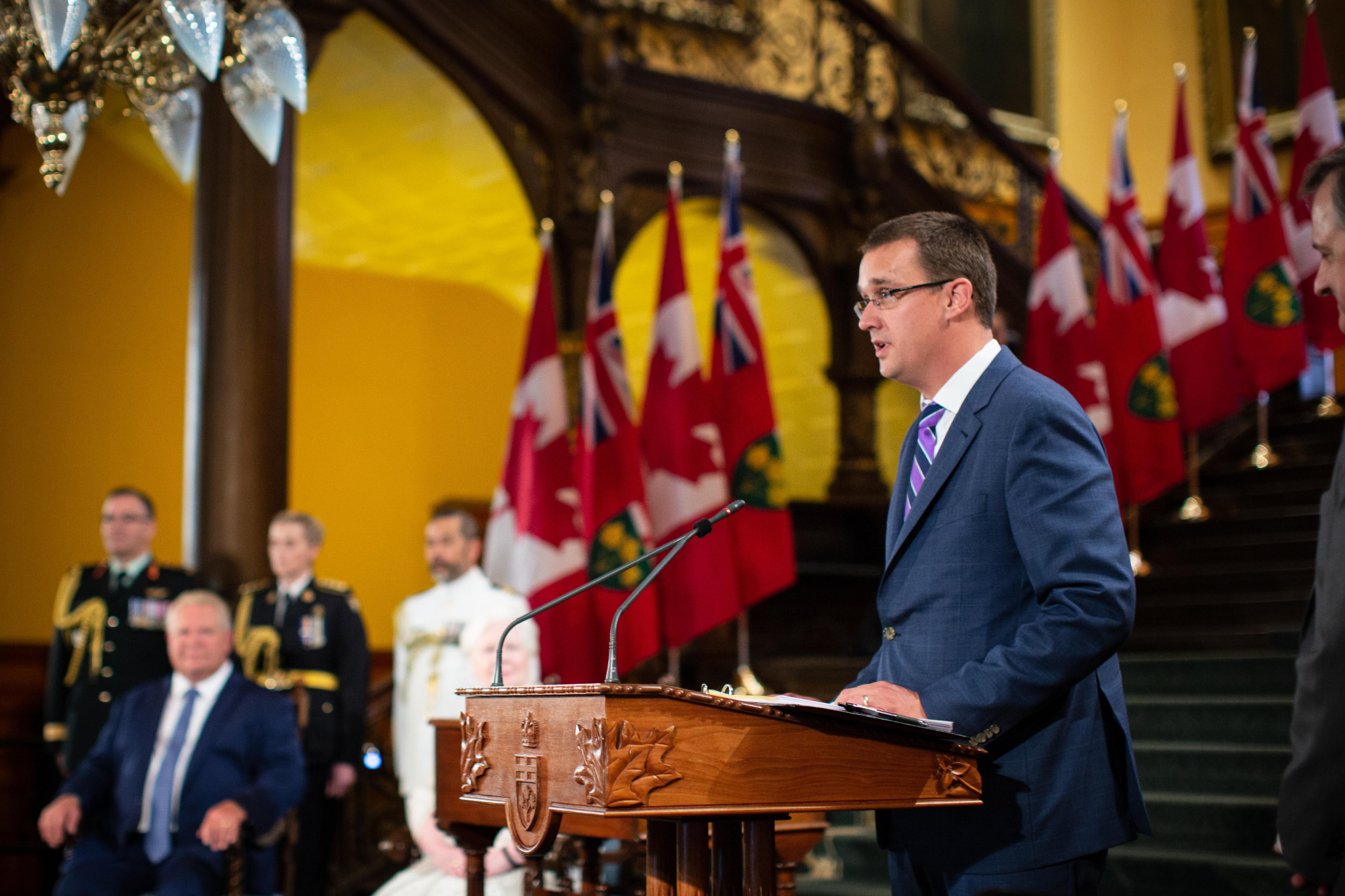 The Ontario government tabled legislation to repeal the province's Green Energy Act on Thursday, claiming the nine-year-old law has allowed the province to "trample" municipal rights to choose local energy projects for too long.

The move is part of Premier Doug Ford's latest round of environmental cutbacks, and is intended to give his government the authority to stop approvals for "wasteful energy projects where the need for electricity has not been demonstrated," according to a press statement.

The new legislation comes one day after an appeal court allowed the Ford administration to proceed with halving Toronto's government in the middle of a municipal election campaign, and follows weeks of tense legislative sittings in which the NDP opposition hammered the Progressive Conservative majority for running roughshod over municipal rights.

“Why weren’t the NDP and their activist friends protesting and getting kicked out of the legislature on behalf of rural municipalities?” asked Infrastructure Minister Monte McNaughton as he and Energy Minister Greg Rickford announced the cancellation at a press conference in Toronto.

The Green Energy Act, enacted by Dalton McGuinty's government in 2009, was intended to expand the development of renewable energy projects. Ford cancelled 758 such contracts in his first week in office.

"The Green Energy Act represents the largest transfer of money from the poor and middle class to the rich in Ontario's history," said Rickford in a news statement.

“The Green Energy Act allowed the previous government to trample over the rights of families, businesses and municipalities across rural Ontario. But we believe the people of Ontario should have the final say about what gets built in their communities."

Federal Environment Minister Catherine McKenna addressed the proposed cancellation on Thursday afternoon, and said Ford was "taking action to move away from the biggest economic opportunity of the century." She commented in response to a question from National Observer at the G7 environment ministers meeting in Halifax.

"It’s really unfortunate that the Government of Ontario is spending most of its time rolling back climate action, and fighting climate action in court — that’s money that could be much better spent, and time that could be much better spent in tackling climate change, and also taking advantage of the huge economic opportunity that has been discussed today by leaders around the world, by businesses around the world."

Former Liberal energy minister Glenn Thibeault, who has been critical of the legislation in the past, expressed concerns about its repeal, calling it a "massive step backwards."

"They talk about municipalities having a voice but we saw that they would go as far as reaching into our Constitution to remove people's voices," Thibeault told National Observer in a telephone interview.

"At the end of the day, when we turn backwards for short-term gains in order to please a few insiders – and only a few very specific industries would benefit from (the repeal) – we lose an emerging market that was growing in Ontario, backed by government policy and that is a shame."

Shawn-Patrick Stensil, a senior energy analyst at Greenpeace Canada said the legislation is "a symbolic blow for green energy" that is in line with the Ford government's policy of dismantling the tools needed to fight climate change."

“What we didn't hear from the Ford government is how they'll empower communities and citizens who want to invest in renewable energy," Stensil told National Observer in an email. "With more and more communities internationally committing to go 100-per-cent renewable, this is a threat to both Ontario's fight against climate change and our competitiveness."

The programs director for Environmental Defence had a similar take on the move.

"Cancelling the Green Energy Act at this point will have no impact on Ontario’s electricity supply mix, nor will it have an impact on energy bills," said Keith Brooks in a statement.

"And yet, the rejection of wind and solar power is unfortunate. Ontario is Canada’s renewable energy leader and also the nation’s clean technology leader. This is not a coincidence. The Green Energy Act brought billions of clean tech dollars to Ontario and created thousands of jobs."

Ontario Green Party Leader Mike Schreiner said the government is laying the groundwork to "waste money on high-cost sources of energy rather than cleaner, cheaper options. The Liberals bought renewable energy when the price was high, and the Conservatives are getting out of renewables when the price is low."

"Independent analyses published by the World Economic Forum show that the average cost of wind in North America is $45/MWh [megawatt hour] compared to $60 for natural gas and $148 for nuclear," Schreiner said in a statement.

"But this government would rather ignore the facts. They are putting ideology over evidence. It’s an injustice to future generations, who deserve to have clean air, a stable planet and an affordable energy system."

Ford’s government has been under fire for the last few weeks for legislation that cuts Toronto’s city council from 47 to 25 wards. That law has prompted court challenges and accusations that Ford, a former councillor whose late brother was mayor of Toronto, has singled out the city for a personal vendetta.

After a Superior Court justice decided that the Better Local Government Act, or Bill 5, unconstitutionally infringed on Charter rights to free expression, Ford’s cabinet threatened to invoke a clause that would enable the government to override the Charter.

The bill was granted a stay by the Court of Appeal on Wednesday, leaving Toronto’s electoral officials to organize a 25-ward model, and allowing the province to avoid having to win passage of the controversial constitutional override – one the Attorney General Caroline Mulroney has been harshly criticized for endorsing.

Between midnight and 6 a.m. Monday morning, hundreds of protesters surrounded Queen’s Park to decry the government’s brazen proposal to use the unprecedented judicial overrule.

Ontario’s ministers of energy and infrastructure introduced Ontario Green Energy Act repeal the day after Ford attributed a five-cent gas price decrease to his cancellation of the former Liberal government's cap-and-trade carbon policy. Critics said the decline was due to the introduction of cheaper winter gas at the pumps.

Rickford said the cancellation of the Green Energy Act would "put the brakes on additional projects that would add costs to electricity bills that the people of Ontario simply cannot afford."

Although the government is saying it wants municipalities and local people to have more say in projects, Ford has already hastily intervened in several ongoing projects.

One was a wind turbine farm in Milford, Ont., under construction by German company wpd. After years of community controversy, the White Pines Wind farm was singled out for cancellation in the new legislature’s second bill.

Government House Leader Todd Smith, MPP for the riding encompassing the project, announced the termination to fanfare from residents who opposed the project.

Another example is Ford's decision in August to maintain a hydroelectric project in Muskoka, Ont. on grounds it is too expensive to cancel.

"We have ways that the Ontario government can get out of this contract without this threat of being sued and, in fact, they could save money," a spokesperson for Save the Bala Falls previously told National Observer, contradicting the premier’s claims that thorough consultation took place before the announcement.

— With files from Fatima Syed and Carl Meyer.

By Keith Leslie | News, Energy | September 27th 2016
Reports from the Race to a Safer World

Wait, wait. Doug "Notwithstanding Clause" Ford is bothered that something tramples on municipal rights?

The expert on TRAMPLING

The expert on TRAMPLING MUNICIPAL RIGHTS has spoken....
Guess it's acceptable for some to trample but not for all...