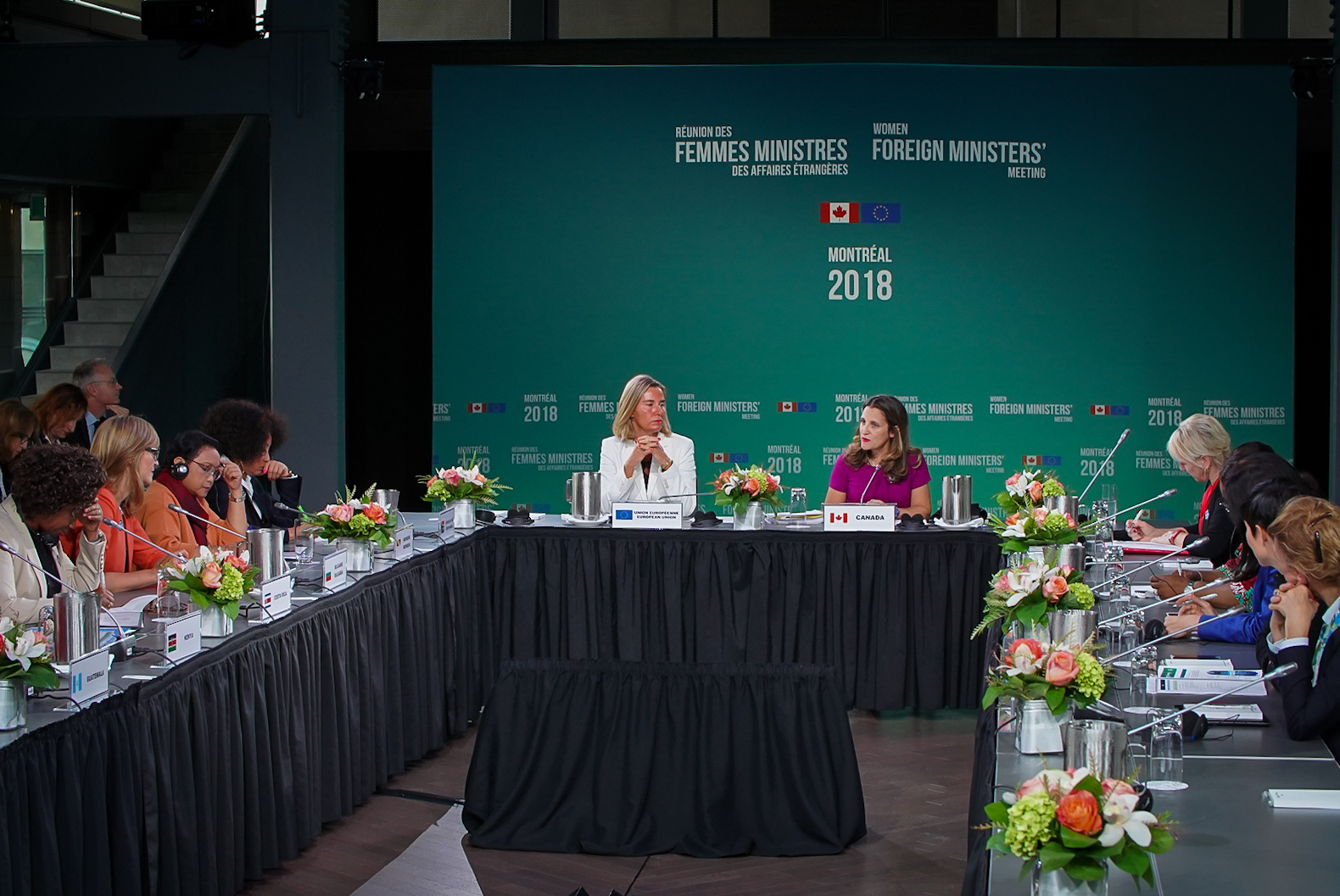 Female foreign ministers convened in Montreal on Friday for an "historic" meeting co-hosted by Minister of Foreign Affairs Chrystia Freeland and her counterpart in the European Union, Federica Mogherini.

Discussions about gender-based violence, feminist foreign policy and defending women’s rights are all on the two-day agenda.

In her opening remarks during the first session, Freeland said the meeting was “a historic moment,” and that, as far as she was aware, it was the first of its kind.

“As foreign ministers, all of us play crucial roles in representing our countries in the world. I think all of us appreciate very personally what a fraught job that is in the world today,” Freeland said.

“We all know that prosperity and peace and security are more likely in places where women, and all people in society can actively participate.”

There are 30 female foreign ministers in the world currently and 17 are attending two-day event from Indonesia, Japan, South Africa, Kenya, Ghana, Costa Rica and Norway, among others.

Mogherini, whose official title is high representative of the European Union for foreign affairs and security policy, told the gathered women that “we walked an incredible path to get here. Some of us were the first women to graduate in our families.

"Most of us were the first women foreign ministers in our country.”

The concept of a feminist foreign policy was first popularized by Swedish Foreign Affairs Minister Margot Wallström, who is in Montreal for the meetings. She published a handbook in August of this year reflecting on her policy’s first four years.

Canada’s aid program was renamed the Feminist International Assistance Policy in June 2017. It “targets the empowerment of women and girls” and wants to “position Canada at the forefront of the global effort.”

Civil society leaders assembled in Montreal on Friday morning called on the federal government for a "better articulation" of its feminist foreign policy, at an event hosted at the University of Montreal a few hours before the start of the summit.

MATCH partnered with six other Canadian civil society organizations, including Amnesty International, the Association québécoise des organismes de coopération internationale (AQOCI) and the Nobel Women’s Initiative, to facilitate an encounter between foreign ministers in attendance and 10 civil society leaders and human rights defenders from around the world.

Anne Delorme from the AQOCI told National Observer that she hoped the 10 women would “light a match and inspire these women ministers who are in power to embrace their feminist side.”

She said it was “fantastic” that these meetings are happening one year before the next federal election, given that a Conservative government is still “an unknown.”

“The previous Conservative government was very resistant to being proactive on women’s rights, and resistant to open dialogue between civil society and government,” she said.

“We are a cross section of Canadian civil society and international civil society trying to push forward this agenda, and we can't lose that momentum. We need to continue to come together, because together our voices are louder, stronger, and hold a Conservative government accountable should they be elected."

'I can change the agenda'

Theo Sowa, CEO of the African Women’s Development Fund, is one of the 10 women joining the foreign ministers for the Saturday morning breakfast.

Sowa told National Observer that she hopes that she and her colleagues will be able to “really encourage the [foreign ministers] to think that their work covers human security, not just the traditional peace and security, which tends to end up with issues around militarization.”

This could include issues like ensuring that refugee camps are designed so women aren’t vulnerable.

She also said that she hopes the foreign ministers will “be able to give each other strength and support, and really be able to say, 'You know what, I am not alone in this. I can change the agenda and have sisters supporting me as I do it.'”

Female solidarity is important, she said. “As an African woman, when you go into spaces, particularly decision-making spaces, very often you are the only one," she explained. "If you are lucky, there may be two of you. It can be a very isolating experience.”

A first and a breath of hope.

A first and a breath of hope....
In case they have not come across it, I highly recommend that the Female first Ministers consider the arguments put forward by Nimmi Gowrinathan in the Fall 2018 issue of the Stanford Social Innovation Review. The article is entitled "The Missing Politics of Female Empowerment." In it Ms Gowrinathan castigates NGOs, Donors, and Governments for ignoring the vexed problem of "real" political participation by women of the Global South. She notes that all three groups seem content to fund the anodyne "solutions" of providing the very instruments and tools that continue the notions of appropriate "womens work" (read continued domestic servitude) while ignoring the hemisphere-wide habits of legal and political oppression/disempowerment.

I lift the following quote verbatim from Ms Gowrinathan's essay:
"The solution begins with an uncomfortable conversation with the development industry on the complicity of various actors in the pattern of de-politicizing marginalized women in the Global South; a dismantling of the guise of empowerment in order to reveal the funding, incentives, colonial legacies, and political agendas driving the design of programs."

Political change in parts of the world almost exclusively dominated by male politics that include brutal militarized regimes, theocracies hostile to women's rights, and corrupt, self aggrandizing civil and military rulers is Hard Work, on treacherous grounds, with plenty of evidence that these political entities will stop at little to destroy women's political ambitions. However, failing to act, simply puts even more of the local, desperate, female activists in mortal danger. We already know that this world of male dominance is prone to genocide and has well entrenched systems of feminicide.

Not that we don't still have these struggles going on in the so-called developed world.
Perhaps it is time to point out the global reach of anti-feminism - and to do something concrete about it - leveraging the the powers of the "development industry"?