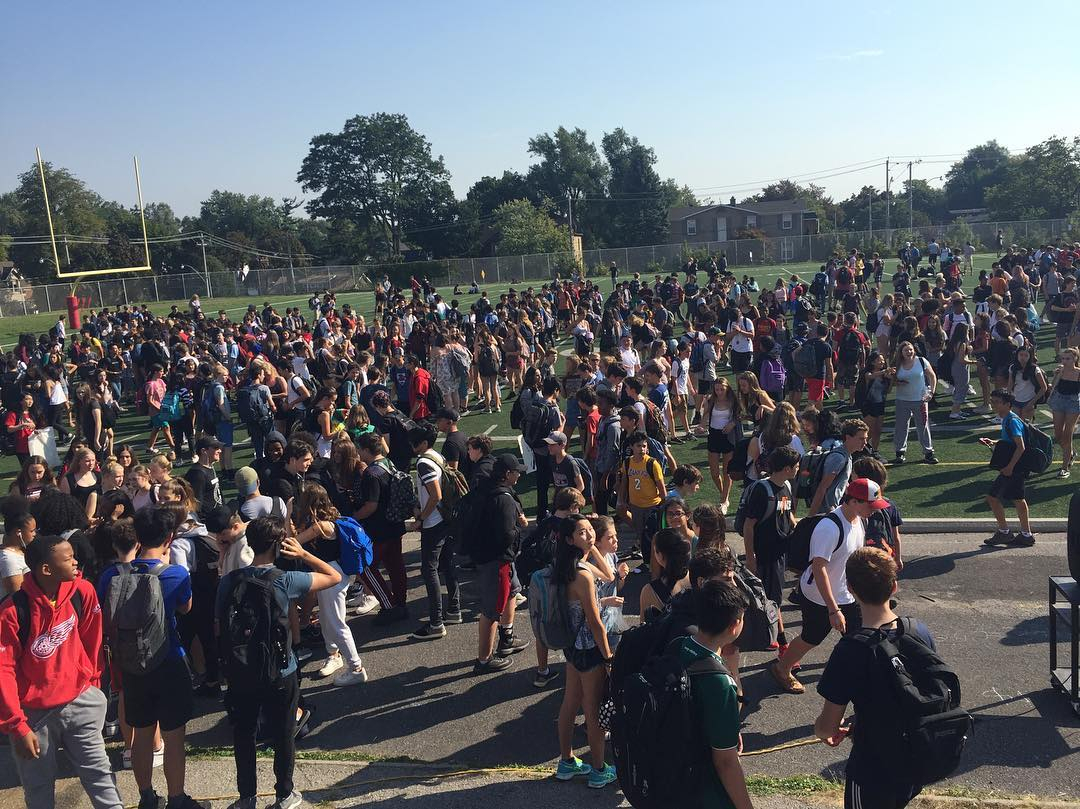 The trajectory of Noah’s story, as he’s well aware, is not new.

At 12 years old, after he came out to his family, he became known as “the trans kid” in his school and faced a vitriol of insensitive questions from his peers about his identity, mostly, he says, out of ignorance.

Noah, however, was lucky. When he came out in 2015, so did a new health and physical curriculum that ensured students were taught about online bullying, gender identity, consent and same-sex relationships.

“If it weren’t for the health curriculum, I honestly don’t know where I may have ended up,” he told National Observer in a phone call.

He would say that again in a speech to dozens of classmates at Toronto’s Northern Secondary School on Friday morning, at a walkout he helped organize to protest Ontario Premier Doug Ford’s sex education policy. Ford is repealing the 2015 curriculum, introduced by the former Liberal government, for elementary students and replacing it with a 1998 curriculum that doesn't address such issues as gender identity, consent and same-sex relationships.

Noah and his classmates were among more than 40,000 students at about 75 Ontario schools in Toronto, Ottawa, London, Kitchener, Peterborough and Niagara who participated in walkouts called "We the students do not consent."

Standing with students at the student walkout at Harbord Collegiate. We are calling for a modern sex-education curriculum that teaches consent, healthy relationships, and respect for people who identify as LGBTQ+. Student walkouts planned at more than 70 schools tomorrow. pic.twitter.com/BXpuBGaNJw

In Toronto, both public and Catholic school boards require parental permission for students to leave class, or else be marked absent. The news of the protests led the Toronto District School Board to advise high schools not to plan major tests or assignments for Friday so students aren’t penalized academically. Staff, they said, would monitor the protests for student safety.

"What's that kid's life going to be like if their school curriculum doesn't include them?" asked Andrea Luey, a lawyer for Justice for Children and Youth #onpoli #SexEd #walkout

Noah organized the walkout with two of his friends. It started as a social media movement, predominately on Instagram, where the comments were filled with hateful attacks against the movement and the children organizing it.

"All of you are defending a curriculum made for children written by a child sex offender and pornographer. Let that sink in," read one comment. "It’s just wrong to teach that to young kids. It’s not even backed by science," read another. "Kids don't need to learn about that stuff and get influenced," said another.

“To be honest, we were expecting all that,” said Noah's friend Alexi, who asked that his last name not be disclosed. Alexi, who identifies as bisexual, expressed the belief that the Ford government’s decision is hurting “the kids who come after us and the ones that come after that.”

“I don’t think every student understands fully yet that this curriculum change impacts all of us, no matter who we are," he said. "So many students still haven’t been taught that consent is necessary, or about online safety, or gender identities. We can't let that happen"

The Ford government announced the curriculum change on Aug. 22. Just over three weeks later, on Sept. 17, Noah launched a challenge at the Ontario Human Rights Tribunal against the government, alleging that the curriculum change discriminates against LGBTQ2S+ youth and will contribute to a hostile school environment for all students.

Noah's application was one of two, and was the first challenge to the curriculum change brought by high school students. Several legal challenges have also been launched by elementary students and teachers.

Both Noah and Ryan are 15 years old and are asking for the 2015 Curriculum to be re-instated and for the tribunal to ensure any future curriculum complies with the Human Rights Code. Their last names have not been disclosed to protect their privacy

"I just needed to do something because this is not right," said Noah, who has younger siblings in elementary schools. “The 2015 sex-ed curriculum included everybody. The new curriculum leaves people out."

Andrea Luey, a staff lawyer for Justice for Children and Youth, a non-profit legal aid clinic representing both applicants, said she met Noah and Ryan at an information session they held to explain to LGBTQ children and their parents, and others, what their rights are.

The human rights challenge, she said, is "to convince the government this is a bad idea and that this will lead to harms for students." 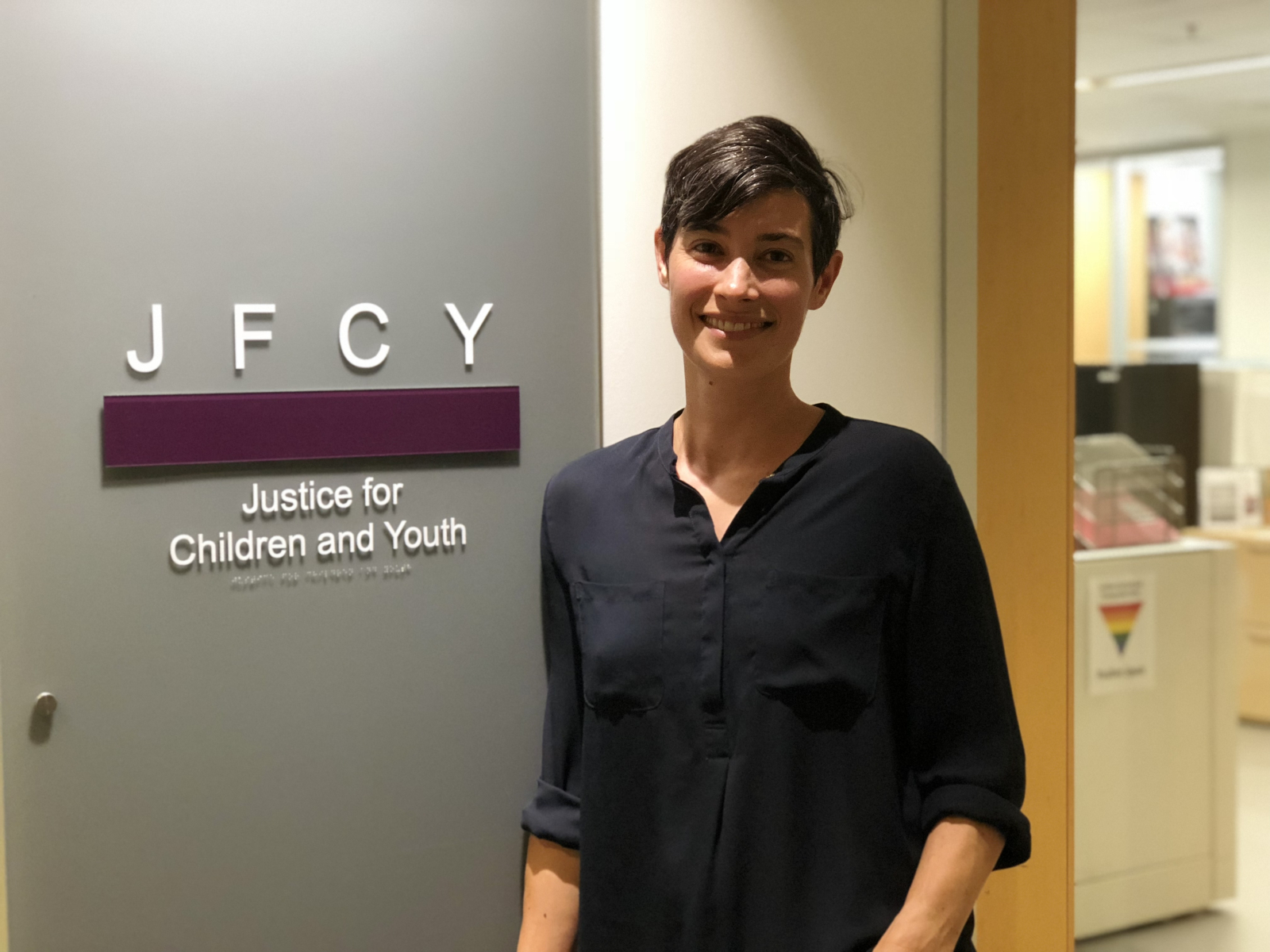 Andrea Luey, the lawyer representing two trans teenagers in their human rights challenge against the Ford government's sex ed curriculum changes, is pictured in her office on Sept. 19, 2018. Photo courtesy of Andrea Luey​​​​​​

"The very knowledge that Noah and Ryan’s identities are being removed from the curriculum is causing them harm," Luey told National Observer in an interview. Both Noah and Ryan are "evidence of the benefits of the 2015 curriculum," because it made their identities more visible and "removed them from being the ones to educate others about it," she added.

If their identities are removed from the curriculum, it indicates that they should hide who they are. "Or that they don't exist," Luey said. "And for them, that's not a reality."

While the province is launching public consultations on a new sex-ed curriculum next week, with students and adults alike encouraged to participate, Luey is worried about the impact this decision in the long run.

In her job, she has seen a lot of young people in difficult circumstances who, as a result of facing discrimination, have suffered mental health issues and homelessness. Luey herself identifies as queer and has two children, the eldest of whom is in senior kindergarten.

"I really have difficulty with the idea that our family isn't going to be officially represented in her health and physical education curriculum," she said.

"Ryan and Noah have benefits and a great support system," she said. "Not every child has that good fortune. Some kids live in areas of the province where no one is out in the community, and that makes their struggle to come out themselves or understand what they’re feeling more difficult."

"What's that kid's life going to be like if their school curriculum doesn't include them?"

What are 'conservative values

What are 'conservative values'? I'd really like someone to fill me in on that, because excluding people, demanding conformity to mainstream ideas, and being afraid that difference is infectious suggests an inordinate amount of fear, but not any real value.

Pushing programs that insist other gendered folk get back in the closet shouldn't be allowed to work. We need to support all our young people in their right to know, to choose smartly, and to stop believing that there's only two choices, one of them wrong.

I'd like to know more about who is included in the base this one man band is catering to, because I seriously doubt it is young people. Demographics please.