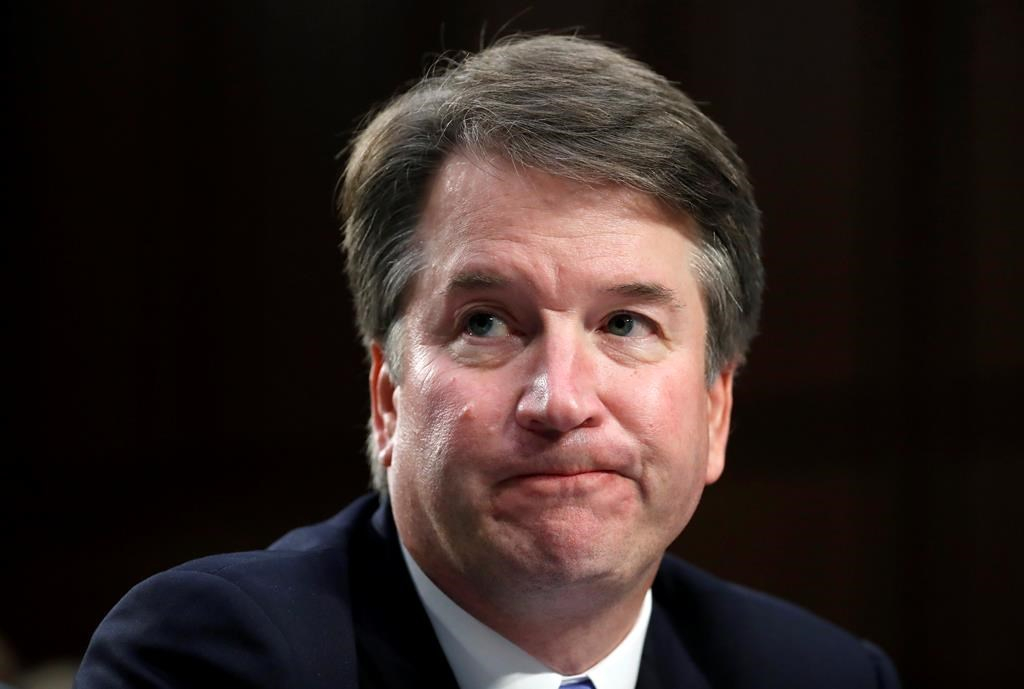 In this Sept. 6, 2018 photo, Supreme Court nominee Brett Kavanaugh reacts as he testifies after questioning before the Senate Judiciary Committee on Capitol Hill in Washington. File photo by The Associated Press/Alex Brandon
Previous story
Next story

When she first told a U.S. lawmaker her harrowing allegation of a 1982 high-school sexual assault at the hands of a prep-school kid now poised to become one of America's most powerful judges, she was just an anonymous psychology professor in California — and wanted to stay that way.

Politically, the stakes were enormous: the kid in question was Brett Kavanaugh, tapped as President Donald Trump's nominee to the U.S. Supreme Court. Within months, Blasey Ford faced an unbearable Sophie's choice: be dragged out of obscurity or march into the line of fire, head up and eyes open.

"Now I feel like my civic responsibility is outweighing my anguish and terror about retaliation," she told the Washington Post in a coming-out story last week, placing herself squarely at the epicentre of a political earthquake that has made her a household name.

"Why suffer through the annihilation if it’s not going to matter?"

That question could be answered in dramatic fashion as early as this week with Blasey Ford, Kavanaugh and the Senate Judiciary Committee set to collide in a riveting election season congressional showdown, with pivotal November midterms just weeks away and Trump badly in need of a political win.

Blasey Ford's story is by now familiar to anyone who's tuned in to a U.S. news channel in the past week: she alleges that a drunken Kavanaugh steered her into a bedroom and tried to undress her during a gathering of teens in suburban Maryland in the 1980s. He has staunchly denied her account.

The Republican party is trying to defend House and Senate majorities in the election, widely seen as a referendum on Trump. The president has himself been accused of sexual misconduct by more than a dozen women, allegations he has denied.

Inside the Senate, only six of the 51 Republicans are women — none of them on the Senate Judiciary Committee. In contrast, four Democrats on the committee are women — some with ambitions to challenge Trump in 2020.

After a brief display of uncharacteristic restraint, the U.S. president was back at it Friday.

"If the attack on Dr. Ford was as bad as she says, charges would have been immediately filed with local Law Enforcement Authorities by either her or her loving parents," Trump tweeted.

"The radical left lawyers want the FBI to get involved NOW. Why didn't someone call the FBI 36 years ago?"

Twitter users around the world answered that question in force, with phrases like "I was scared," "Nothing would happen" and "No one would believe me," illustrating in stark terms the real-world practicalities faced by survivors of sexual assault.

"Rape myths, including the ones we heard espoused (Friday), are a lot of the reason women do not report and do not come forward and stay silent," said Lauren Dobson-Hughes, an Ottawa consultant and prominent Canadian advocate of women's rights.

Among those myths, said Dobson-Hughes: rape is typically perpetrated by strangers in dark alleys, women routinely take their allegations directly to the police and the majority of complaints are based on false allegations.

In truth, perpetrators of sexual assault are usually known to the complainant, often a partner or an ex-partner; incidents typically happen in someone's home; alcohol is often at play in order to facilitate the attack; and an estimated 70 per cent of complainants never tell anyone, let alone the F.B.I.

Add to that the heated political atmosphere of a Supreme Court confirmation hearing and it's remarkable that Blasey Ford has come forward at all — although it's clear that circumstances have forced her hand.

"She went privately to discuss her concerns, but then understood that she would be outed," said Dobson-Hughes. "I don't think her coming forward with her name was necessarily her choice."

Canada is no stranger to such trials in the court of public opinion.

The Liberal government introduced strict new privacy rules for federally regulated industries to better protect the victims of harassment or violence — including for those who work on Parliament Hill — following a series of allegations by and against MPs in recent years that tested Prime Minister Justin Trudeau's bona fides as a leader committed to gender rights and equality.

Despite efforts to protect their identities, the names of those involved in those incidents, be they complainants or perpetrators, have long since either been widely publicized or remain open secrets in the halls of political Ottawa.

Indeed, one of them is Dobson-Hughes herself, who at the height of the latest furor earlier this year spoke out publicly about her experiences being verbally harassed, groped and forcibly kissed during the seven years she spent working on the Hill for the New Democrats.

"The framing at the moment is these two dichotomies of either completely exposing yourself to immense amounts of personal and professional risk, or saying nothing," she said.

"What we need to move to is having that middle ground spectrum where we're enabling independent, neutral, sensitive investigation of a complaint while protecting the complainant's rights and safety, and coming to a fair, independent conclusion to that.

"That's what we don't have at the moment, and it's why mainly women are forced to either say nothing or completely expose themselves."