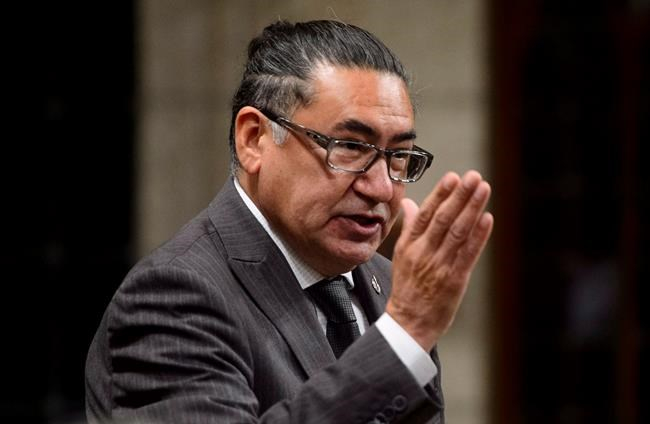 During question period, the NDP's reconciliation critic accused the federal government of "wilfully" violating its constitutional duties and obligations when it comes to its handling of the controversial Trans Mountain pipeline.

"Sounds like a 'most-important relationship' doesn't it?" Saganash said, referring to Trudeau's repeated characterization of his relationship with Indigenous Peoples.

"Why doesn't the prime minister just say the truth and tell Indigenous Peoples that he doesn't give a f**k about their rights?"

The remarks immediately prompted some grumbling inside the chamber before Speaker Geoff Regan stood up and asked for an apology from Saganash over his use of profanity.

Regan said the Quebec MP is an experienced member who knows the word constitutes "unparliamentary language."

"What is happening is so insulting, that it just makes me so angry," Saganash said in French. "But I do withdraw the word."

Regan thanked Saganash for doing so.

Trudeau's Liberals have been scrambling to find a way to address a summer ruling from the Federal Court of Appeal that quashed the approval for the Trans Mountain pipeline project. The decision cited insufficient consultation with Indigenous communities and a failure to assess the environmental impact of additional oil-tanker traffic off the coast of British Columbia.

Last week, Natural Resources Minister Amarjeet Sohi ordered the National Energy Board to go back and conduct a review of tanker traffic. He wants it to provide a new recommendation on the pipeline before the end of February.

"Why doesn't the prime minister just say the truth and tell Indigenous Peoples that he doesn't give a f**k about their rights?" - @RomeoSaganash in the House of Commons re #TransMountain

The federal government has yet to announce how it plans to re-engage with Indigenous communities.

For his part, Sohi defended his approach Indigenous rights while speaking in the Commons on Tuesday.

In his capacity as minister, Sohi said he had reached out to Indigenous leaders, even prior to the court's findings.

"We will move forward on this project in the right way making sure that we're meeting our constitutional obligations to meaningfully consult."

Trudeau also doesn't give a

Trudeau also doesn't give a *hoot* about the rights of our children to anticipate a reasonable future, rather than growing up on a dying planet, sacrificed for nothing more lofty than cash, momentary political power, and lazy self-indulgence.

Why doesn't he ask his science advisor to introduce him to some climate scientists, or have a quick thumb through the last IPCC report, Summary for Policymakers? Too busy finding a way to ignore what's staring us all in the face, as we deal with our burned, flooded, or exploded homes and properties, across the nation? Or as we ponder the fate of escalating numbers of threatened species across our land and seas?

I can understand Mr. Saganash

I can understand Mr. Saganash's frustration. There's no "meaningful consultation" possible as long as PM Trudeau and Minister Morneau keep saying the pipeline will be built. It sure doesn't look like reconciliation to me. It seems PM Trudeau has sold all his principles to the fossil fuel industry. If you haven't read Kevin Taft's book, "Oil's Deep State," yet you should do so at your earliest opportunity.

talking heads i have lost all

talking heads i have lost all respect and will sell my One inch of this pipeline that .We own
do the math what,t it worth