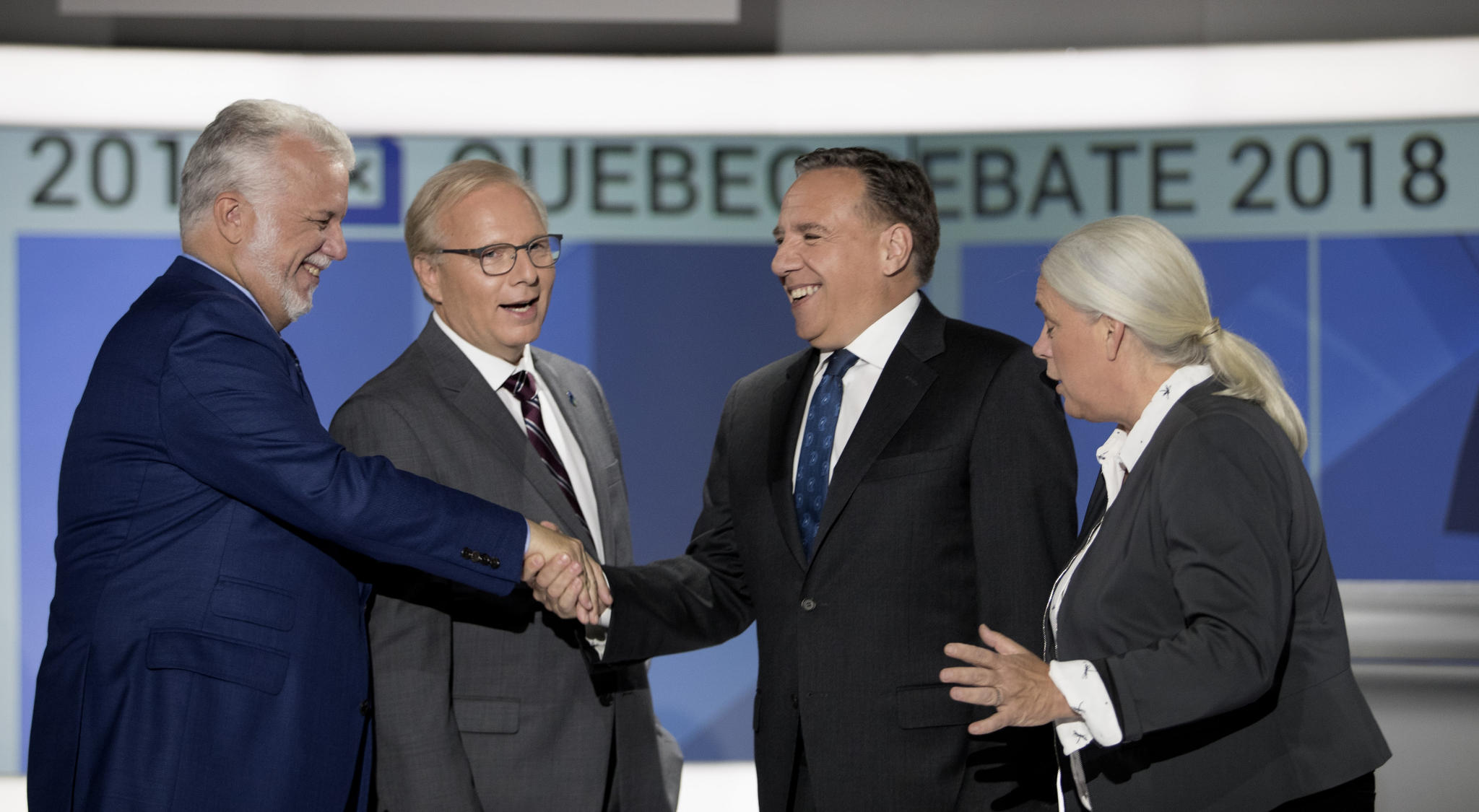 Hot on the trail of New Brunswick's wacky election results, a minority government is looking likely in Quebec, with neither Philippe Couillard's Liberals nor François Legault's Coalition Avenir Québec party predicted to win the 63 seats needed for a majority.

As political scientists anticipate a short-lived alliance between the centre-right CAQ and the Parti Québécois in order to ensure the smooth running of parliament until the next election, Montrealers told National Observer on Friday that they would welcome a minority government.

“I actually prefer a minority government,” said Vince Spinale, the 43-year-old owner of Les P’tit Enfants de Felice café on Park Avenue in the Mile End. “When it’s a majority, they kind of do what they want. This way, everybody kind of watches over everybody else.”

He surmised that Quebec will face minority governments “for a while. There’s too many platforms and too many differences.”

Quebec goes to the polls on Monday. Currently, poll aggregating website qc125.com demonstrates that while the CAQ and the Liberals are currying the same amount – to the decimal point – of popular support at 30.8 per cent, the CAQ are likely to get 57 seats and the Liberals 45.

This distortion is largely because the CAQ’s francophone voter base is distributed more equally around the province. Anglophones traditionally vote Liberal and are more heavily concentrated in ridings in Montreal and the Outaouais region.

PQ leader Jean-Francois Lisée has rejected the idea of a formal coalition government with any of his adversaries, but has implied that he is open to an alliance to work against the Liberals if they win a minority.

François Rocher, political science professor at the Unviersity of Ottawa, said that an alliance between the CAQ and the PQ would be a good opportunity for the latter “to distinguish themselves and get the government to adopt a more forceful policy on environment or be more generous vis-à-vis people living on social assistance. Essentially, bring the right-orientated government towards the centre.”

It’s a strategy that might win the PQ support and votes in the next election, he said.

In the event of a PQ-CAQ alliance, the CAQ would have to govern “very carefully” in order to not "inflame political debate" and lose a confidence vote. “In that sense, having a minority government is not bad because it avoids the extreme swing in public policy.”

Daniel Salée, political science professor at Concordia University, also said the PQ is the only “viable” option for the CAQ. In his view, QS wouldn’t support anyone “because ideologically, they are too far apart.”

Besides, CAQ leader François Legault has said an alliance with the left-leaning party is "out of the question."

Salée said the Liberals will "have a hard time getting the support of anyone" if they win a minority.

Salée warned it's important to take the polls with a pinch of salt, pointing to the Quebec general election of 2007 when Mario Dumont – leader of the now dissolved Action Democratique party – lost to Liberal Jean Charest.

“(Dumont) was in the same situation to Legault. He had the wind in the back of his sails," Salée said. "But in the end people didn’t vote for him, they recoiled in the voting booth. Too conservative, too right wing.”

“Minority governments don’t last. It’s a year and a half at the most. You don’t have time to do much apart from realign your forces, your troops, so that you can prepare for the next election,” Salée added.

Rocher was a little more positive, predicting that a minority government elected next week could last as long as 28 months.

“People are tired," he said. "There’s a high level of cynicism vis-à-vis politics in general. And what nourishes that cycnicism is when people are asked to vote too often. So, if (the governing party) want to secure a high-turnout they would probably seek to temper their push for an election sooner.”

Rocher added that Quebec is likely to see minority governments multiply in the years to come given that the four decades-old bipartisan battle between the Liberals and the PQ has been quashed by the entry of the CAQ and QS parties into the race. Quebec has finally caught up with most of the rest of the world, he said, with a political campaign hinging on “the left-right spectrum instead of the Quebec national question.”

Questioned on whether minority governments are problematic or positive, he called it "an old debate. The question is, do we prefer a more stable or less representative government, or do we want something that is more in line with the variety and diversity of options and preferences we see in the political community?”

On Friday morning, Montrealers welcomed the prospect of a minority government.

Construction worker Daniel Beaulieu said that voting for him was a case of “choosing the least bad party.” He said a minority government is a “more positive than negative” outcome.

Mile-End resident Sylvie Roy told National Observer that “it’s a good thing if there’s a minority, because people will have to discuss. It’s been Liberal for 15 years, so if they get a minority, they will have to listen to the others."

In New Brunswick, the Sept. 24 election has resulted in a deadlock: incumbent Liberal Premier Brian Gallant won the popular vote with more than 37 per cent, but lost the legislature by one seat to the Progressive Conservatives. Gallant wants to continue governing the province and is attempting to win the confidence of the legislature while his Conservative adversary Blaine Higgs considers himself premier-elect and has said that he is ready to form a minority government as soon as vote recounts are completed next week.

Rocher said that if Quebec ends up in a similar position as New Brunswick – where the Liberals win fewer seats but get more votes – Couillard would be in “a good position to say, I’ll try my luck and stay in power.”

Earlier this week, Lisée capitalized on the situation in New Brunswick to advocate for proportional representation in Quebec, telling reporters the situation was “an advertisement for our proposal for voting system reform.”

The PQ, the CAQ and QS have all been outspoken for the need for voting system reform in Quebec. They all signed an agreement in May that pledged that they would change Quebec’s first-past-the-post electoral system if elected. They want to replace it with a version of a mixed-member proportional system, whereby voters would still vote for a local National Assembly representative, but a share of seats would also be allocated by the popular vote.

They walked 500 kilometres for social housing