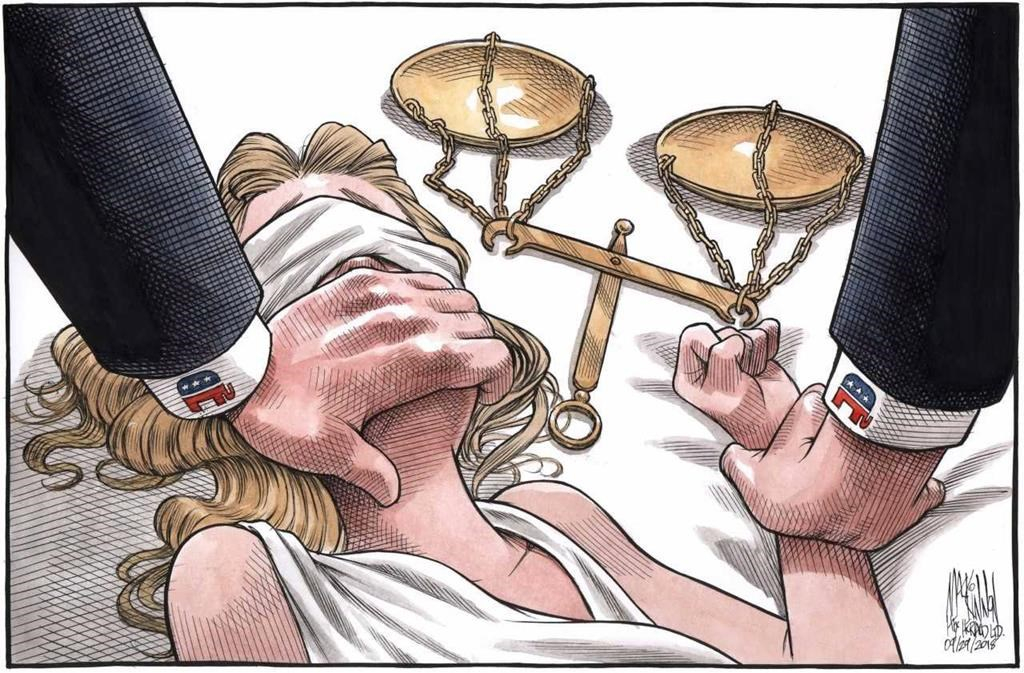 A political cartoon depicting the assault of Lady Justice has gone viral in the wake of recent allegations against Supreme Court nominee Brett Kavanaugh.

The graphic image by Halifax-based Bruce MacKinnon shows Justice blindfolded and pinned down, her scales cast aside as a man's hand covers her mouth — an explicit reference to how California professor Christine Blasey Ford described an alleged sexual assault by Kavanaugh dating back to 1982.

In the picture, the cuffs on the shirt the man is wearing are decorated with the Republican elephant.

Like many viewers over the past week, MacKinnon, a cartoonist for The Chronicle Herald, was gripped by Ford's televised testimony at the Senate Judiciary Committee, which culminated in a request for an FBI investigation and the delay of a Senate vote on Kavanaugh's confirmation.

"I watched the testimony as it happened. It was riveting," MacKinnon said Sunday. "It was one of those things where you couldn't even exhale until she was finished."

Ford alleged Kavanaugh groped her and tried to remove her clothing after he pinned her to a bed at a house party when she was 15 and he was 17 — claims he vehemently denies.

MacKinnon said he was compelled to draw the cartoon, which was published in the weekend edition of The Chronicle Herald, to illustrate what he believes to be a crucial example of how allegations of sexual abuse are treated in North America.

"In a year that was so dominated by the #MeToo movement and the changes that I think we all hope will come from that, this seems to be an almost watershed moment and a very pivotal one for America," he said.

It caught the attention of actress and #MeToo activist Alyssa Milano, who tweeted it out Sunday with the caption: "You've made a misogynistic, hurtful, joke of our Supreme Court, @realDonaldTrump. ... Women won’t forget. And we vote."

Some users have described feeling a "gut punch" upon seeing it, and one woman tweeted the provocative cartoon made her feel like she couldn't breathe.

But MacKinnon said these feelings of disgust are, in some ways, the point of his cartoon.

"I think it's important that people face up to it. It is disturbing. But it's exactly the scenario (Ford) described," he said.

"So if we don't talk about it, if we turn away from it and pretend it isn't there, we're not going to solve the problem."

It's not the first time the award-winning cartoonist has taken aim at situations to the south, but MacKinnon said the culture of sexual assault is pervasive on both sides of the border.

The flurry of responses to his work — both positive and negative — came as a surprise to MacKinnon, but he said he was glad his cartoon is contributing to a conversation that he believes is important to have.

"I was surprised by the response and really encouraged by the fact that there was so much discourse that came from it, so much open debate," he said.

"There was a lot of nasty stuff out there too, no question. It does underscore the deep divide and the real polarization of opinion here and in the U.S., but that's what an editorial cartoon is for: to provoke debate, and hopefully, in the larger picture, some things get worked out."

Michael de Adder, a freelance cartoonist also working out of Halifax, drew a similar cartoon and posted it on his Twitter account on Friday: in his, Lady Justice is lying on a bed with her scales and sword beside her as Kavanaugh and an elephant — a symbol for the Republican party — walk away, laughing.

He said the similarities between his and MacKinnon's cartoons were coincidental.

On Sunday morning, he tweeted his and MacKinnon's drawings together and said political cartoons are not always meant to be funny.

"A political cartoonist does not depict sexual assault casually. The message to the people in power has to outweigh the consequences of drawing something so horrible," he wrote.

"These two cartoons are horrible. But so were the events of the past week."