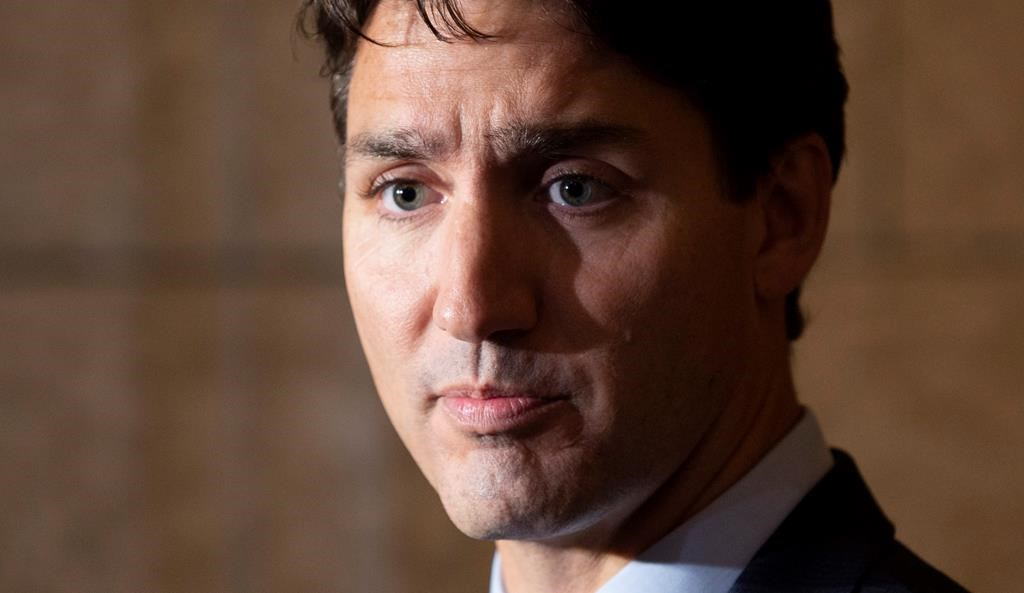 Prime Minister Justin Trudeau is calling on Quebec premier-designate Francois Legault to carefully consider the consequences before applying the notwithstanding clause to prevent those in positions of authority — such as police officers and teachers — from wearing religious symbols on the job.

The day after winning Monday's election, Legault vowed to use the powerful constitutional provision, if necessary, to uphold a proposal to prohibit some state employees in Quebec from wearing religious signs, including garments like the Jewish kippa and Muslim hijab.

Legault insisted such a ban is important enough to Quebecers that he's prepared to invoke the rarely used notwithstanding clause, which would override the Charter of Rights and Freedoms.

Trudeau, however, insisted Wednesday that the clause should be reserved for "exceptional circumstances" and only deployed after lots of deep reflection about its broader ramifications.

"It's not something that should be done lightly because to remove or avoid defending the fundamental rights of Canadians, I think it's something with which you have to pay careful attention," Trudeau, who represents a Montreal riding, said in French when asked about Legault's plan.

"As you know very well, I'm not of the opinion that the state should be able to tell a woman what she can wear, nor what she cannot wear. The Charter of Rights and Freedoms is there to protect our rights and our freedom."

Remove religious symbols or move to another job

Legault's centre-right Coalition Avenir Quebec won a convincing majority mandate in the provincial election after promising voters it would carve out more autonomy for the province.

His rise to power appears destined to create fresh conflicts between Quebec and Ottawa.

In reaffirming his position Tuesday, Legault said he believes most Quebecers want to have a framework in place to prevent people in authority positions from wearing religious symbols.

"If we have to use the notwithstanding clause to apply what the majority of Quebecers want, we will do so," he said.

PM @JustinTrudeau insists that the override clause in the Canadian Constitution should be reserved for "exceptional circumstances." #CANpoli #Quebec #hijab

The province has been gripped by public debate over the accommodation of cultural and religious practices for more than a decade.

Trudeau's remarks on the issue came on a day when the Coalition's transition team presented details of Legault's new rules — and warnings to those who refuse to comply.

After a period of transition, those affected by the rules will have a choice — remove their religious symbols or move to another job that is not a position of authority.

If they decline to make either choice, they will be dismissed, warned Genevieve Guilbault, the transition team's spokeswoman and a newly elected Coalition member.

Public workers who lose their jobs after refusing to follow the rules will be the architects of their own misfortune, Guilbault told reporters in Boucherville, Que. The jobs affected by the ban also include judges, prosecutors and prison guards.

"I think there is a major consensus among Quebecers that we need to have clear boundaries with that," she said. "We always promised we would make sure to establish those boundaries — and we'll do so."

Guilbault defended the plan, arguing that the government's main goal will be "to integrate more and better immigrants that chose to come here."

Legault has also pledged to reduce the number of immigrants that Quebec accepts annually by 20 per cent. He also wants to force newcomers to pass French and values tests within three years of their arrival — or face removal from the province.

Enforcement, however, for such expulsions would be a federal jurisdiction. Legault intends to get more immigration powers for Quebec through negotiations with Ottawa.

The Coalition's election win caught the eye of Marine Le Pen, a controversial, far-right political leader in France with an anti-immigration stance. She tweeted Tuesday that Quebecers voted for less immigration.

Clearly, the attention was unwanted because Legault responded Wednesday on Twitter with: "I reject all association with Le Pen."

"Quebecers are welcoming and generous," he continued in French. "We will welcome thousands of immigrants each year, but we will do it in a way that promotes integration. We will take in less, but we will take care of them."

The notwithstanding clause gives provincial legislatures and Parliament the ability to bring in legislation that circumvents certain provisions of the Charter of Rights and Freedoms, for a five-year period.

Even though its use has been limited, Quebec is the second provincial government to threaten to invoke it in recent weeks.

Over the summer, Ontario Premier Doug Ford said he would use the notwithstanding clause to slash the size of Toronto's city council.

In the end, Ford didn't have to use the clause because Ontario's top court sided with his government in the legal battle over his controversial plan. Had he proceeded, it would have been the first time the clause was used in Ontario.