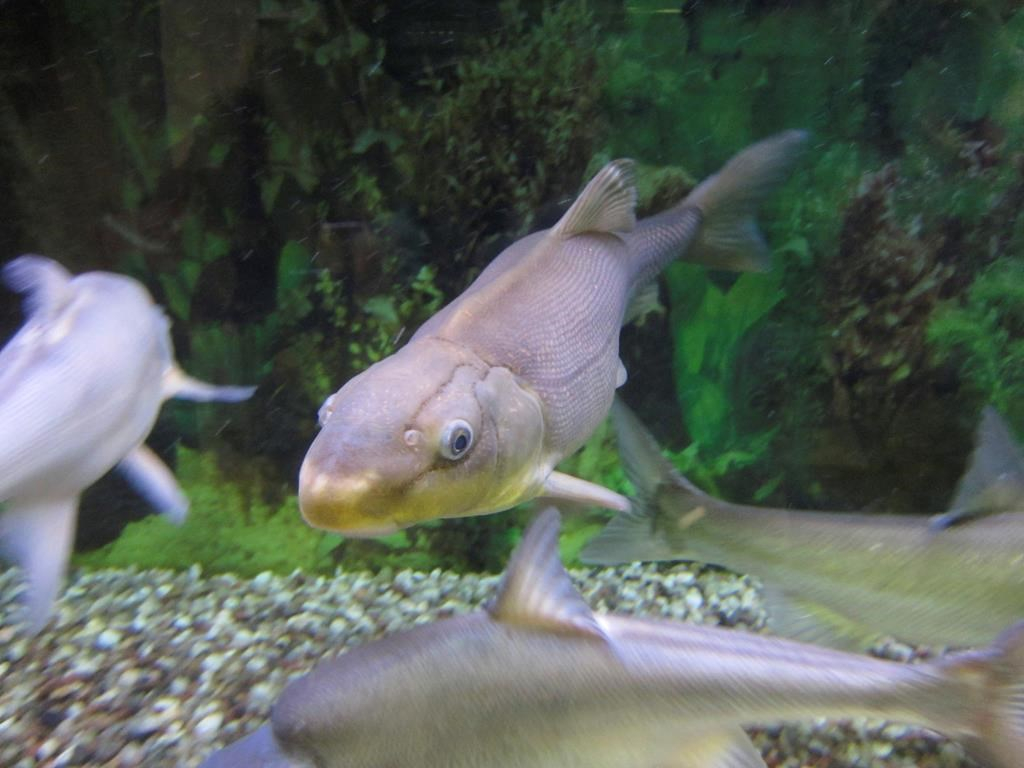 In this Tuesday, Oct. 2, 2018 photo, a Colorado River razorback sucker fish is shown swimming in a tank at the U.S. Fish and Wildlife Service office in Lakewood, Colo. File photo by the Associated Press/Dan Elliott
Previous story

Another rare Colorado River fish has been pulled back from the brink of extinction, the second comeback this year for a species unique to the Southwestern U.S.

The U.S. Fish and Wildlife Service plans to announce Thursday that it will recommend reclassifying the ancient and odd-looking razorback sucker from endangered to threatened, meaning it is still at risk of extinction, but the danger is no longer immediate.

The Associated Press was briefed on the plans before the official announcement.

Hundreds of thousands of razorbacks once thrived in the Colorado River and its tributaries, which flow across seven states and Mexico.

By the 1980s they had dwindled to about 100. Researchers blame non-native predator fish that attacked and ate the razorbacks and dams that disrupted their habitat.

Their numbers have bounced back to between 54,000 and 59,000 today, thanks to a multimillion-dollar effort that enlisted the help of hatcheries, dam operators, landowners, native American tribes and state and federal agencies.

"It's a work in progress," said Tom Chart, director of the Upper Colorado River Endangered Fish Recovery Program. "We get more fish out in the system, they're showing up in more places, they're spawning in more locations."

Chart's program oversees the campaign to restore the razorback sucker and three other fish, all of them found only in the Colorado River system.

In March, the Fish and Wildlife Service recommended changing the humpback chub from endangered to threatened. It takes 18 to 24 months to complete the process, including a public comment period.

The razorback sucker's name comes from a sharp-edge, keel-like ridge along its back behind its head. Chart thinks the ridge may have evolved to help the fish stay stable in the turbulent waters of the Colorado.

Razorbacks have been around for between 3 million and 5 million years, but trouble arrived as the population expanded in the Southwest. State and federal agencies began introducing game fish into the Colorado without realizing they would devour the native fish, Chart said. A spurt of dam-building was a boon to cities and farms but interrupted the natural springtime surge of melting snow, which in turn shrank the floodplains that provided a safe nursery for young razorbacks.

Dams also made parts of the rivers too cold for razorbacks, because they release water from the chilly depths of reservoirs. And they blocked the natural migration of the fish.

By the late 1980s, most of the wild razorbacks were old, an ominous sign they were no longer reproducing, Chart said. The Fish and Wildlife Service began capturing the remaining wild razorbacks and moving them to hatcheries to begin rebuilding the population.

The agency designated razorbacks an endangered species in 1991, although Utah and Colorado enacted state protections earlier.

Biologists began restocking rivers with hatchery-raised razorbacks in 1995. Now, about 55,000 are released into the Colorado and its tributaries annually.

Wildlife officials began reining in non-native predator fish with nets and screens to keep them from escaping reservoirs, or removing them by electrofishing — stunning them with electricity and euthanizing them with an overdose of anesthetic.

Changing the fish from endangered to threatened will allow more flexibility in the way it is protected, said Kevin McAbee, deputy director of the recovery program.

Under endangered status, individual fish have to be protected, but threatened status means biologists can take steps to improve the overall population even if some fish might be hurt, McAbee said.

Razorbacks still face challenges. The first-year survival rate of hatchery fish, each roughly 14 inches (36 centimetres) long, is about 20 per cent or less in the wild, Chart said. It climbs to 80 per cent after that.

Drought, climate change and increasing human demand are straining the rivers, which makes it harder for fish to survive.

McAbee said the Fish and Wildlife Service took the river's uncertain future into account before recommending the change for the razorbacks. Their long lifespan helps them endure low-water years when few young fish survive, he said.

Co-operation among water users in 2018, a year of devastating drought in much of the Southwest, shows the razorbacks' needs can be accommodated, McAbee said.

"Things could have been catastrophic," he said.

Taylor McKinnon of the Center for Biological Diversity is doubtful about how healthy the razorbacks really are.

The government's reliance on hatcheries to boost the population shows they are not self-sustaining, he said, and he worries about their future in the overtaxed Colorado River.

"I think the elephant in the room right now with regard to recovery is climate change and river flows and regional aridification," he said.

"We're skeptical of the merits of this," McKinnon said.

By The Canadian Press | News, Politics | March 2nd 2018
State Of The Animal