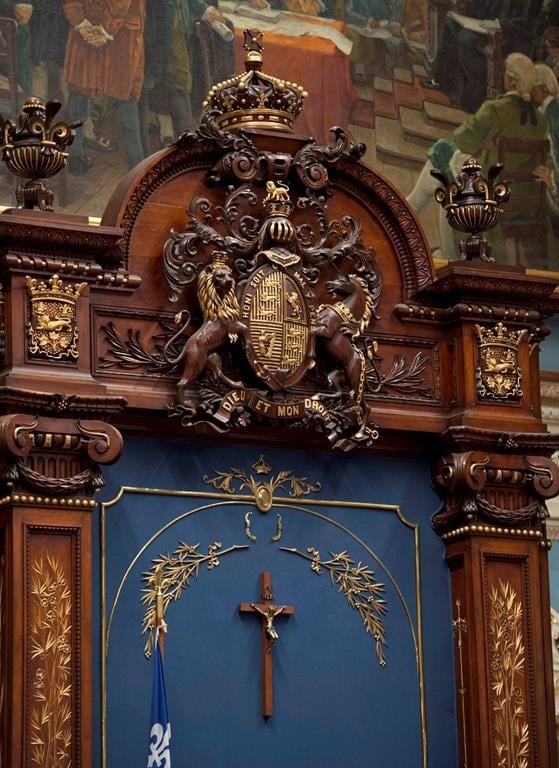 The crucifix inside the National Assembly is shown on Tuesday, November 5, 2013 at the legislature in Quebec City. File photo by The Canadian Press/Jacques Boissinot
Previous story
Next story

The incoming Coalition Avenir Quebec government is facing criticism for saying it has no intention of removing the crucifix from the legislature, even as it plans to crack down on some civil servants who wear religious symbols.

Simon Jolin-Barrette, a spokesman for the Coalition transition team, said Tuesday there is no contradiction between the new government's plan to impose strict religious-neutrality rules on certain public servants and its desire to maintain the crucifix.

He said the crucifix, which has hung behind the Speaker's chair since the 1930s, is part of Quebec's heritage.

But Patrick Taillon, a professor in Universite Laval's faculty of law, called that a double standard.

"The government can't talk out of both sides of its mouth," he said in an interview.

"I can't see how, on the political level, we want religious neutrality and secularism and not apply that standard at the national assembly."

But Jolin-Barrette acknowledged the principle of judicial independence means that for provincially appointed judges, application of the new law is out of the government's hands.

Taillon agreed the new government cannot force judges to apply the law to themselves.

"If a judge decides to wear a religious symbol, it won't be a Quebec law that prevents them from doing that," he said.

"It's the chief justice or the judicial council that decides if a judge commits a violation of the code of ethics."

Last week, a Coalition spokeswoman said teachers who refuse to accept a different job or to remove religious symbols would be dismissed.

But on Tuesday, Jolin-Barrette took a slightly softer line, saying the Coalition is prepared to work with opposition parties to find common ground.

Concordia University's Harold Chorney, a political scientist, had a warning about the plan to prohibit religious symbols.

"It's a very delicate matter, (and) you can unleash a very unpleasant environment here," he said on Tuesday.

Chorney called on the government to be tolerant.

"If they're not, then we're going to have a constitutional clash and a political one."

The political backlash has been growing since premier-designate Francois Legault said he was moving ahead with the plan to restrict religious symbols.

On Tuesday, Jim Beis, the mayor of the Montreal borough of Pierrefonds-Roxboro, criticized what he called "the perceived racist policies promised by the new elected Quebec government."

He accused the Coalition of "turning the concept of neutrality into a Trojan Horse to implement policies of exclusion and division." He added: "No Quebecers should have to choose between their careers and their faith. No one, including women, should be told how to dress, and in no way does one’s attire determine one’s ability to perform their job."

Legault's cabinet is to be sworn in Oct. 18.