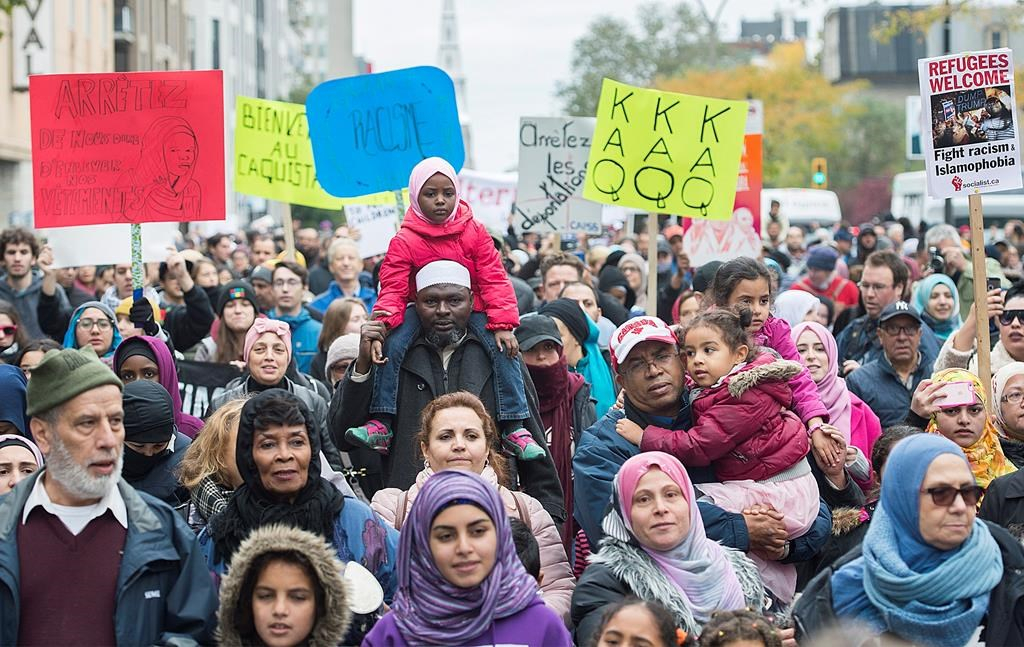 People take part in a demonstration against racism in Montreal, on Sunday, October 7, 2018. Photo by The Canadian Press/Graham Hughes
Previous story
Next story

A diverse crowd of protesters took to the streets of Montreal on Sunday to march against racism and denounce the newly-elected Coalition Avenir Quebec government.

Muslim families pushing strollers, Indigenous community leaders, masked anti-capitalist activists and members of some 50 community groups marched through the city's downtown in a protest that stretched across several blocks.

Many demonstrators carried signs targeting premier-designate Francois Legault, who has promised to cut immigration and submit new Quebecers to a French and values test within three years of arriving.

Legault has also said he's ready to use the Constitution's notwithstanding clause to pass legislation banning public servants in positions of authority from wearing religious clothing such as Muslim hijabs, Jewish kippahs and Sikh turbans.

Members of Sunday's crowd, which included a large number of women in hijabs, made it clear they weren't among the new premier's supporters.

"Not only will I keep my veil, Mr. Legault, I'll put on my cowboy hat to fight for my rights," read one poster.

"Stop telling us to take off our clothes," read another that was accompanied by a hand-drawn picture of a woman with her head covered.

Jennifer Jerome, a Mi'kmaq woman, said she was there to act as example for all of Quebec's children, including her own four kids.

"We are first peoples here, and we shouldn't have any politician discriminate against others that are coming here and creating our diversity — in Montreal especially," she said.

"Quebec wouldn't be anything without immigration."

While Legault's party won 74 of Quebec's 125 seats in last week's election, only two of those were on the island of Montreal, which contains 27 ridings.

Yazid Mahlah, 18, was one of about a dozen people at the front of the crowd helping to hold up a large black banner denouncing racism and hate.

He explained he was there for his mother, who wears a Muslim head covering.

"If you take away my mother's veil, basically you take my mother from me," he said. "You take her identity from her."

The march occurred hours after a downtown statue of Sir John A. Macdonald was spray-painted red.

An anonymous group describing themselves as anti-colonial, anti-capitalist activists claimed responsibility for the damage, which police say occurred Saturday night.

The group said in a news release that it wasn't involved in organizing Sunday's demonstration, but wanted to support the event by defacing the statue of Macdonald, whom they described as a white supremacist who contributed to the genocide of Indigenous peoples.

In 1883, Macdonald argued in the Commons for the removal of Indigenous children from their "savage'' parents so they could learn the ways of white men.

The Montreal statue has been spray-painted on several previous occasions, including this past August.

If far-right white nationalists are congratulating you, Mr. Legault, time to reassess your politics