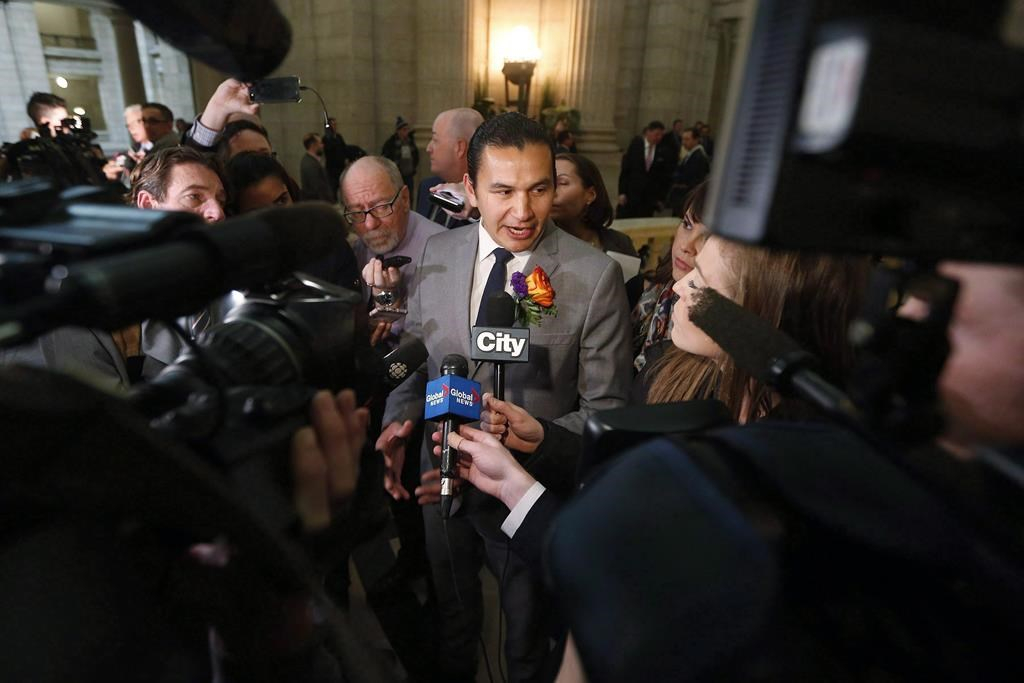 Wab Kinew speaks to media outside the legislature after the provincial throne speech was read at the Manitoba Legislature in Winnipeg, on Tuesday, Nov. 21, 2017. File photo by The Canadian Press/John Woods
Previous story

Manitoba's Opposition New Democrats want the provincial government to revive its plan to bring in a carbon tax.

NDP Leader Wab Kinew says his party will try to amend a Tory government bill to include a levy of at least $25 per tonne of carbon.

Premier Brian Pallister had planned to enact a carbon tax in December, but pulled back after the federal government wouldn't rule out imposing its own, higher levy.

Kinew says climate change is too important to ignore, and action is needed now, as highlighted in a recent report from a United Nations panel.

Kinew admits his party has little hope of changing the bill, given the large Tory majority in the legislature, but says he will continue to press the government.

"I don't expect a flood of Tory defections to come pouring my way, but this issue is a fight for the future of our province," Kinew said Thursday.

"As critical as I was of the premier's plan up until ... when he reversed himself, even if they were to revert to that earlier plan that they talked about (with the carbon tax) ... I think that would be at least part of a solution towards tackling climate change."

Pallister said his government's plan to curb emissions was laid out last year in a climate change document and only the carbon tax is being removed. The plan includes phasing out coal use and offering incentives for increased energy efficiency.

"There are 66 pages devoted to green (energy) which we will focus on. But we will not add to the uncertainty and economic struggles of our people in this province by allowing the federal government to dip into the pockets of Manitobans," Pallister said in question period.