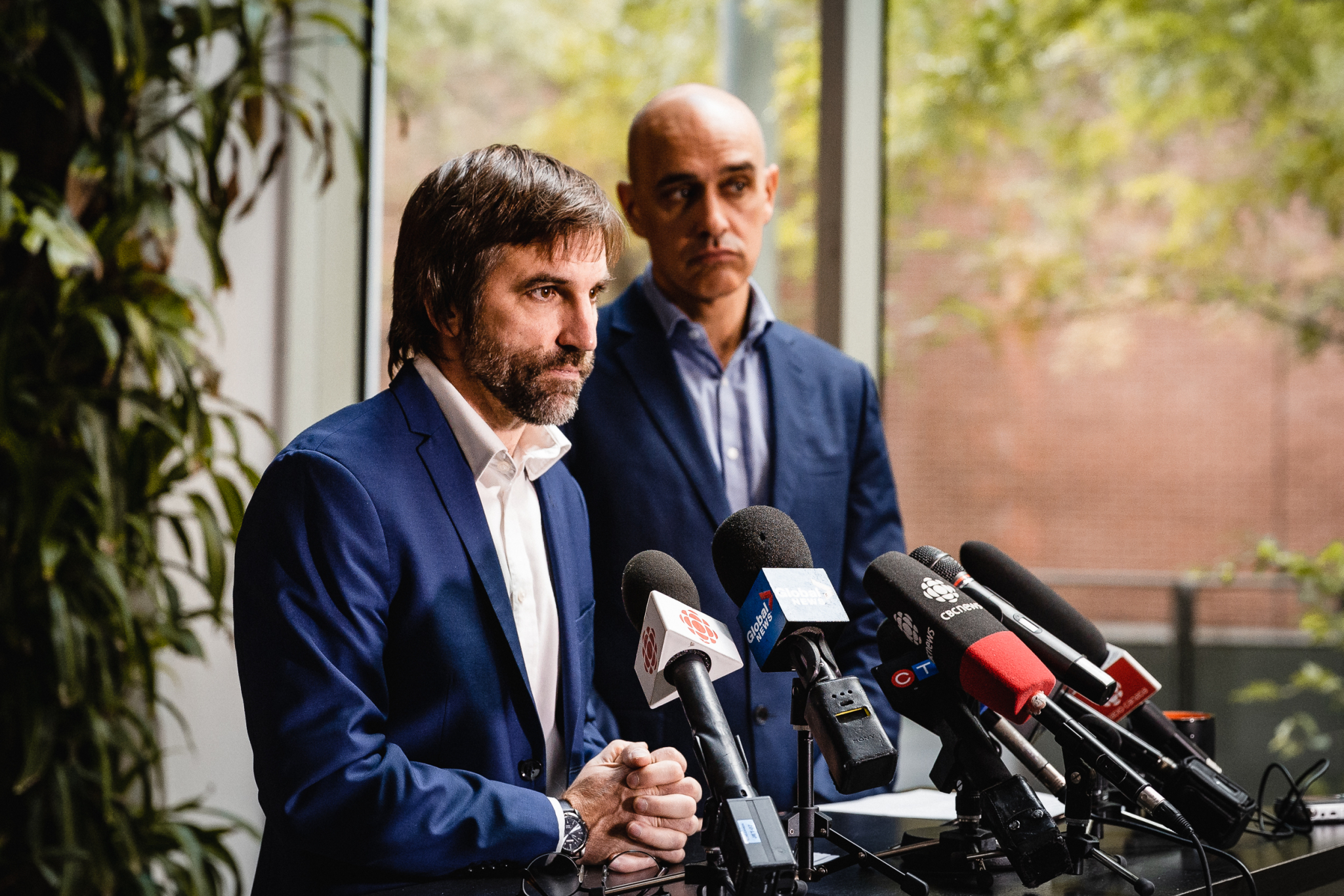 Standing side-by-side with his long-time colleague, Sidney Ribaux mischievously threw a light jab at a gaggle of journalists and TV cameras deployed for a Friday morning news conference.

He didn't expect to see so much interest for a briefing about pesticides, he said with a smile.

It was a joke. The assembled media were gathered in front of a five-storey high living green wall at the Centre for Sustainable Development in downtown Montreal — the headquarters of Quebec conservation group Équiterre — to hear about a career change for Steven Guilbeault, 48, a leading figure in Quebec's environmental movement.

Ribaux and Guilbeault were among a small group of activists who founded Équiterre in 1993, eventually turning it into one of Quebec's most prominent conservation groups that now counts 22,000 members, 200 volunteers and 50 employees. Their organization has consistently been on the front lines of activism shaping public policy. Most recently, it is known for efforts to crack down on harmful pesticides such as neonicontinoids and promote action on climate change, including recent battles to electrify the province's transportation network and to stop the proposed Energy East pipeline, a project that was eventually abandoned in 2017 by Calgary-based energy company, TransCanada Corp.

A meal with Gerald Butts

But on this day, reporters flocked to hear Guilbeault and Ribaux speak about rumours prompted by a report in French-language daily, La Presse, suggesting one of them was on the verge of making a jump into politics with Prime Minister Justin Trudeau's Liberals.

The report quoted "reliable sources" who said they saw Guilbeault enjoying a meal in Ottawa, three weeks earlier, with Trudeau's principal secretary, Gerald Butts. It also said that Liberal officials had been chatting with Guilbeault for weeks and that the "sources" wouldn't be surprised if he would run for the governing party in an upcoming by-election in Montreal, triggered by the resignation of former NDP Leader Thomas Mulcair.

It turns out those sources were wrong about an imminent jump into politics, Guilbeault said.

He confirmed he's stepping down as senior director of Équiterre, but he has no plans to be a politician "in the short term."

Instead, he said that he will be splitting his time between finishing a book about the role artificial intelligence (AI) plays in climate solutions, alongside advisory roles at two different firms. One of those firms is Cycle Capital Management, which, in his opinion, is "the most important financial fund manager for green technologies in Canada." The other is Copticom, a public relations firm that is specialized in issues such as the green economy, the energy sector and the environment.

"I wish to explore some new elements of the fight against climate change," he told reporters. "Mainly, the role technology is going to play, and more specifically the role artificial intelligence can play [...] And also the role investment can play. We’ve seen in the last few years more and more people within the investment community talk about the importance that they can play in the fight against climate change. That’s why I’m trying to increase my understanding of the fields of investment and technology and to do more work in those fields."

Ribaux called his co-founder “an incredible communicator” and “part of the reason we’ve had an easier time to talk about climate change in Quebec and getting progressive policies in place in this province.”

One of the best known figures on Quebec's environmental stage due to his work with Équiterre and Greenpeace Quebec, Guilbeault has been nicknamed the "Green Jesus of Montreal" by La Presse. On the international stage, French newspaper Le Monde listed him among the world’s 50 leading actors in the field of sustainable development in 2009.

It's not the first time rumours have swirled about Guilbeault entering politics. In 2008, he was reportedly courted by the federal Liberals to join their ranks. Last March, he told HuffPost Quebec that he had no intention to run for the provincial election.

He did, however, confirm he met recently with Butts from Trudeau's office in Ottawa. But he said he was actually meeting the prime minister's senior aide on behalf of Équiterre to discuss policies about the electrification of transportation, investments in transit, and a carbon tax.

Moments earlier, Guilbeault told reporters at the news conference that he had “affinities with a few parties in Ottawa, namely those that believe climate change should be a priority. I have less affinity with the party who doesn’t think so."

The party he was likely singling out was the Conservative Party of Canada, led by Opposition Leader Andrew Scheer, who recently described Canadian oil as the cleanest form of energy in the world. Scheer's Conservatives have spent much time in recent months complaining about Trudeau's efforts to make polluters pay for releasing greenhouse gas emissions into the atmosphere, without offering any plan of their own to tackle the social, ecological, and economic threats posed by climate change.

Not cutting the cord

Guilbeault became a director of Équiterre in 2007, when he rejoined it after a 10-year stint with Greenpeace Quebec.

The organization will not hiring a replacement, said Ribaux. “[Équiterre] is a mature organization, we have a very strong management team right now.” Responsibilities will be shared between Ribaux, who is Équiterre's executive director, Annie Bérubé, director of government affairs and Colleen Thorpe, director of education programs.

Guilbeault told National Observer that he plans to stay involved with the organization and “help in any way I can.”

Butts pulls the Trudeau strings. He did the same for Ms. Wynne of Ontario Liberal fame too. That didn't work out well.