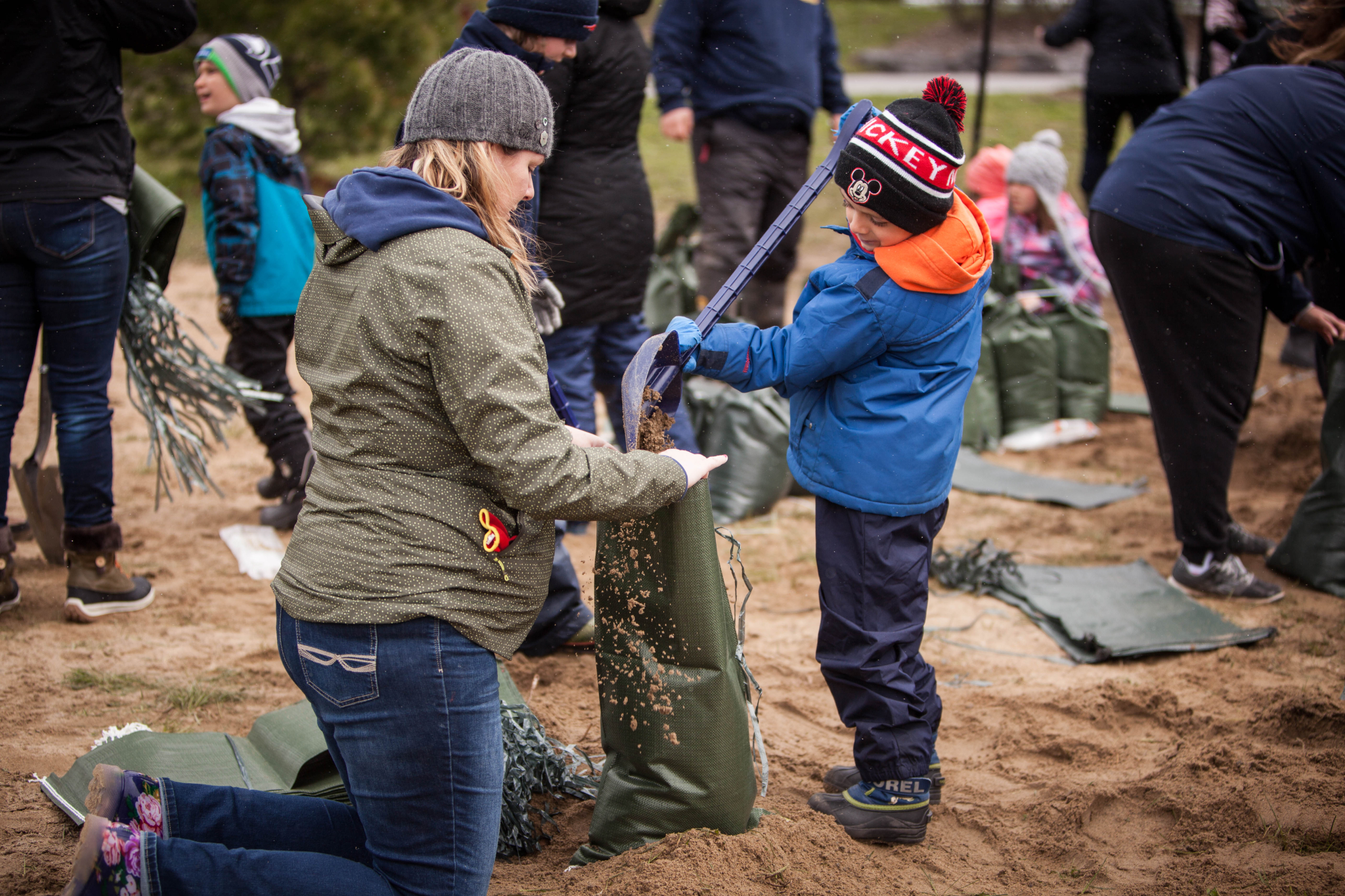 Carter Vadeboncoeur, right, helped fill sandbags at Parc Louis-Roy in Gatineau, Quebec on May 8, 2017 after the Ottawa River flooded homes for the second time in just a week. Photo by Alex Tétreault
Previous story
Next story

Like many couples in our thirties, my wife and I are on a fertility journey – a pleasant-sounding way of describing monthly disappointment and visits with specialists.

Struggling to conceive leaves you with ample time to think about the Earth your child will inherit and whether, knowing what we know, it is even still ethical to bring life into this world.

To put it starkly, I sometimes ponder the odds of my future children dying in a climate-related natural disaster, becoming climate refugees, or fighting in the climate conflicts to come. Unless you’ve been keeping up with the science, their odds are probably worse than you think.

Such are the perils of being born into the throes of the sixth great extinction where fully one-quarter of all plant and animal species on land are threatened with obliteration by 2050. A 2016 report by the World Wildlife Fund and the Zoological Society of London suggested an astounding two-thirds of all wild animals may be gone by 2020 compared to 1970 levels.

While the fates of the now extinct Yangtze river dolphin, Javan tiger, or northern white rhino may not have moved us to decisive action, we are currently much closer to the possible decline of our own species than many care to consider.

Which path will we take?

Two paths meet before us: the one we are on with all that the science says about it – for our planet, its biosphere, our health, and our wealth – and one towards a more flourishing future.

The path we are on was forged from the combustion of fossil fuels and the unrestrained exploitation of our natural world.

Historical concentrations of greenhouse gases in our atmosphere have fluctuated, as have global temperatures. But starting in the 1950s we’ve presided over an exponential increase in atmospheric concentrations of these gases due to human activity, reaching levels unseen in over 800,000 years.

Not coincidentally, as greenhouse gases trap heat from the sun, the last four years have been the warmest on record (17 of the 18 hottest years have occurred since 2001).

We are at our children's climate crossroads. The two paths are clear, as are their consequences. Which will we choose? #ClimateChange #cndpoli #onpoli OPed in @NatObserver

In 2015, the world came together in Paris to sign a non-binding agreement pledging to limit the increase in global average temperature to 1.5°C above pre-industrial levels and below 2°C (we’re currently at 1°C). As the recent report from the Intergovernmental Panel on Climate Change made clear, we’re on track to fail miserably.

If we don’t act meaningfully, warming temperatures will unleash new sources of greenhouse gases in addition to our own that will further warm the planet, in what scientists refer to as “feedback loops.”

The thawing permafrost represents one such feedback loop. As the Arctic melts, vast amounts of CO2 and methane previously trapped underneath the ice will gradually escape into our atmosphere. We’re talking about up to 1.6 trillion tonnes of C02, or twice what’s already there.

As the oceans warm they will also begin to release more of the CO2 dissolved in their waters. Oceans absorb about 30 percent of our annual CO2 emissions, and produce over 70 percent of the oxygen in our atmosphere.

These emissions will further amplify the greenhouse effect, and runaway global warming may become unstoppable.

The health of our oceans is already suffering: 2017 was the hottest year on record for global ocean temperatures. This warming and ocean acidification decimate coral reefs, home to a quarter of all marine species, thus affecting the livelihoods of people who depend on seafood for sustenance.

Warmer oceans and air temperatures also result in increased evaporation, and as a consequence, storm systems can grow more powerful and produce heavier precipitation of both rain and snow.

We are facing a world devoid of coral reefs, a dying Amazon rainforest, frequent and worsening natural disasters, spreading disease, entire regions rendered nearly uninhabitable, a steep decline in agricultural outputs, economic downturn, and the displacement of millions of climate refugees. When I say ‘we’ it’s not some distant, amorphous ‘we.’ It’s you and me, and especially our children and grandchildren.

And yet, every single day we continue to dump 100 million tonnes of manmade global warming pollution into our atmosphere. And every year, air pollution kills seven million people worldwide, as our emissions constitute both a climate and health crisis.

Children are especially vulnerable to vector-borne diseases, waterborne diseases, heat stress, asthma, malnutrition, psychological stress, conflict, and homelessness, all of which are aggravated by climate change. Already, global hunger has regressed to levels last seen a decade ago due largely to extreme weather.

Canadians contribute to the climate crisis, and we have among the highest per capita emissions in the world. Despite a terribly misguided $4.5-billion investment in the Trans Mountain pipeline, the federal government is at least taking some steps towards meeting our climate goals.

But many Canadians still do not understand the aim and benefits of taxing carbon pollution, let alone that a carbon tax can be designed to be revenue neutral and used to reduce personal income taxes.

Without a carbon tax to incentivize emissions cuts and to fund climate action, carbon will exact a much higher toll down the road.

Already in 2017 insurers paid out US$135 billion worldwide just to cover losses from natural disasters, with overall damages amounting to US$330 billion. And that’s not counting lost productivity, health bills, or the compounding longer-term devastation springing from our inaction.

On the other hand, a recent report by the Global Commission on the Economy and Climate found that the world economy could grow by an additional US$26 trillion by 2030 if governments get serious about stopping global warming. Climate change is not just a threat; it’s also the greatest economic opportunity of the 21st century.

A kind of Marshall Plan for a sustainability revolution would generate millions of new jobs and grow green industries. We would see an explosion in research and development, and infrastructure projects. We would begin to turn an atmospheric crisis into a human transformation towards greater health and prosperity.

Which brings us to the other path, the one much less bleak for our children and already before us.

Groundwork laid for a low-carbon economy

Around the world, entrepreneurs, innovators, investors, farmers, designers, architects, engineers, policy makers, systems thinkers, journalists, activists, Indigenous peoples, and others, have been laying the groundwork for the more sustainable, just, low-carbon economy of the future.

The cost of renewable energy has plummeted to the point where in many parts of the world it is at parity or cheaper than coal or nuclear power.

In the European Union, 77 percent of new electricity capacity installed in 2017 came from wind and solar. In China, it was 54 percent. At the same time, energy storage has become less and less expensive, with prices of lithium-ion batteries dropping by almost half between 2014 and 2016.

Clean energy and energy efficiencies, as well as other emissions-cutting practices, are being adopted across major sources of greenhouse gas pollution, including transportation, buildings, agriculture, and industry.

We already have the solutions we need. For example, Project Drawdown, the 2017 book and New York Times bestseller, provides us with a roadmap to halt and reverse global warming.

To choose this path as our destiny we must be willing to evolve; to change how we live, from how we vote to how we invest our savings, from what we eat to how we travel.

At no point in human history have we needed to make such a consequential decision for our children, with such drastic implications for human civilization. Our window of opportunity to make that choice is closing rapidly.

When I think of our children’s climate crossroads, I also think of the children already teetering on the edge of hunger and thirst, and those sick from air pollution.

I think of those in the future who may drown or have to escape places like Miami and Kolkata, those trapped in the blazes of forest fires, and those crippled by Lyme disease or malaria.

I think of the jobless, the dispossessed, and the frightened. I think of the angry too. Those who will ask us what we did once we knew, and find we did far too little.

We have failed them so far. They will never forgive us if we fail them for good.