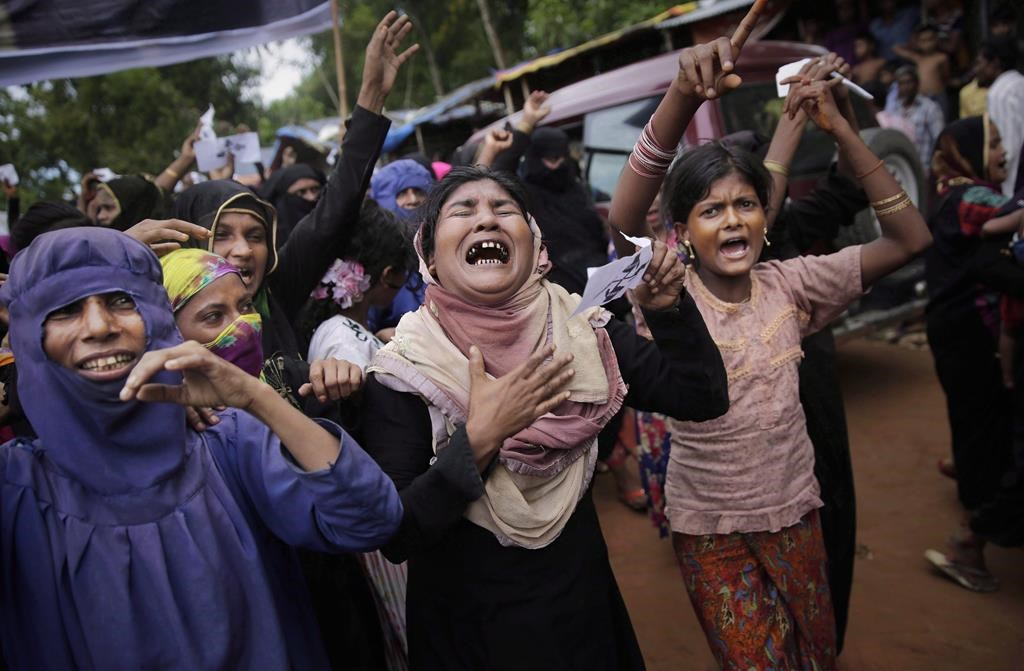 Rohingya women cry as they shout slogans during a protest rally to commemorate the first anniversary of Myanmar army's crackdown, at Kutupalong refugee camp in Bangladesh on Aug. 25, 2018. File photo by The Associated Press/Altaf Qadri
Previous story
Next story

A new report from the non-government organization that works in poverty alleviation and disaster relief takes a close look at how Canada provides international humanitarian aid and the gaps that exist when it comes to outcomes for women and girls in refugee situations.

Canada has made great strides when it comes to making gender equality and feminism a key priority of its domestic and foreign policy agenda, but more can be done to help women who are disproportionately affected by global crisis, the report says.

"Currently, Canada's international assistance funding is out of step with its ambition to be a world leader on gender equality and feminist aid and foreign policy," the report states.

"The fact that Canada's international assistance spending is at a near historical low, merely reaching 0.26 per cent of gross national income, as compared to the UN aid target of 0.7 per cent, undermines its credibility and leadership on the international stage."

The study zeros in on areas where women in conflict zones are not getting the help they need or where efforts to improve gender equality in these areas are not being fully realized.

Among unsettling findings are the 25 to 50 per cent of maternal deaths in refugee camps caused by unsafe abortions and related complications.

This is due, in part, to a lack of adequate access to sexual and reproductive health services, which are often seen as a "second-tier" priority when people are forced to flee their homes due to conflict.

"Our argument is that services are totally life-saving when you consider, for example, that last year 500 women and girls died during emergencies every single day from pregnancy and childbirth complications simply because sexual and reproductive health and rights weren't a priority," said Brittany Lambert, a women's rights policy and advocacy specialist with Oxfam Canada.

"These things should be prioritized from the very inception of these humanitarian responses and could save many lives."

Oxfam Canada also published findings last month following a series of interviews, focus groups and surveys of hundreds of women and men from the host and refugee communities in Bangladesh, suggesting Rohingya women and girls who survived genocide in Myanmar are facing new risks in refugee camps, notably when it comes to access to water and sanitation facilities.

Some women are choosing to go hungry and thirsty and are restricting their children’s diets in order to limit their trips to these facilities to reduce risks of physical and sexual abuse and harassment, according to this research.

The organization is calling on Canada to develop a 10-year plan to achieve the United Nations aid target of 0.7 per cent of national income.

It also wants Canada to establish a dedicated pool of 15 per cent of all its humanitarian aid to be specifically earmarked to address the needs of women and girls.

"Right now the way Canada's funding system works is that humanitarian assistance is aligned with the global humanitarian system priorities, which are things like shelter, water, food — but gender is not one of those categories," Lambert said.

"Women's needs can be inserted into these categories but there are really limited funding opportunities to actually undertake programming that address gender inequality as a main goal so that's why we're calling for a stand alone pool of funding where Canada could actually fund this kind of feminist programming."

In addition, Oxfam Canada says the Trudeau government should take firmer action to ensure weapons do not end up in the hands of those who commit gender-based violence.

Several international aid agencies, including Amnesty International, have said loopholes exist in Canada's arms export policy that would allow arms sales to the United States — weapons which could end up being transferred to countries that abuse human rights.

The government has announced several measures aimed at championing women's issues both at home and abroad, including launching a feminist international assistance policy and a national action plan on women and government. Canada also disbursed more than $68 million in humanitarian assistance to support sexual and reproductive health needs in 2017-18.

In addition, Canada has committed to increase its foreign aid effort by $2 billion over five years, which will bring total assistance to nearly $6 billion by 2021, says Global Affairs Canada.

"We agree with the report that we need to ensure that the voices of civil society partners and affected communities, particularly women and girls, are included throughout the humanitarian response," said the statement from Global Affairs Canada.

"That is why Canada expects its partners to directly consult affected communities, and ensure that women and girls, in particular, are involved in the design of initiatives and decision-making processes that affect their lives."