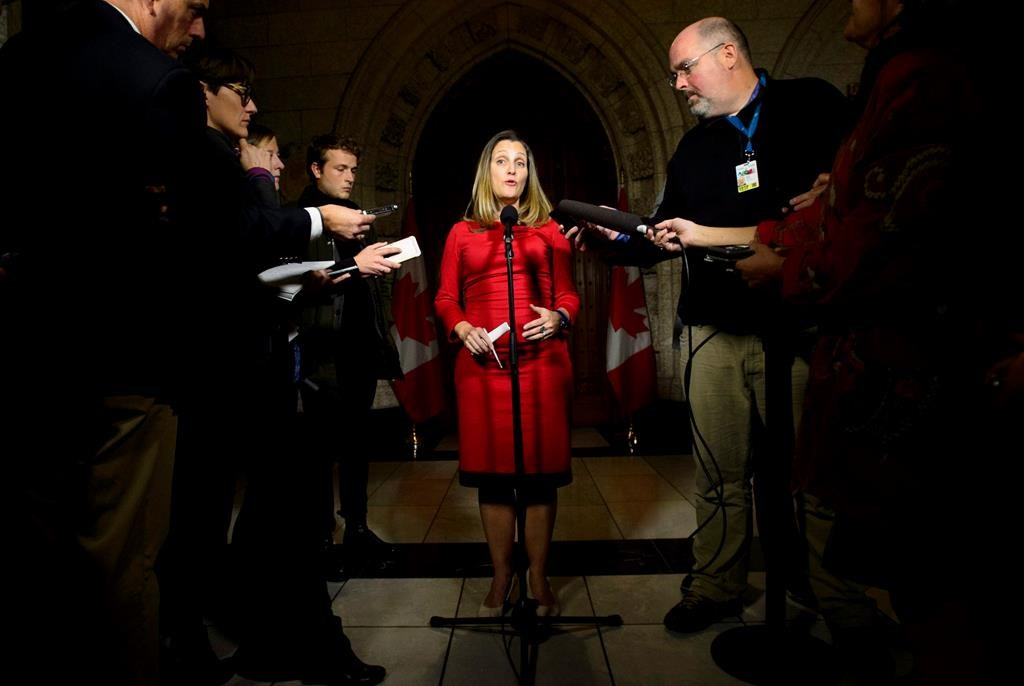 After more than a year of leading intense trade negotiations with the United States and Mexico, the first thing Foreign Affairs Minister Chrystia Freeland did when the new agreement was reached was to lie on the floor of the prime minister's office.

"I did. That is true," she said Tuesday during a talk at the Fortune Global Forum in Toronto.

Freeland agreed that her reaction was due to exhaustion and just the thrill of the tumultuous 14-month process finally being over.

The new trilateral pact between the U.S., Mexico and Canada, commonly referred to as USMCA, was reached at the 11th hour on Sept. 30 and sets to modernize the North American Free Trade Agreement.

The negotiations were tense, with U.S. President Donald Trump threatening on a number of occasions that his country would withdraw from NAFTA altogether.

Freeland told a room of Canadian and foreign business leaders that the talks between the three countries had many "moments of drama," which she had anticipated from the start.

"Trade negotiations are this odd thing. On the one hand, they can be incredibly technical about really, really specific technical issues," she said. "And on the other hand, they're punctuated by these very dramatic moments ... drama is par for the course."

When asked about Trump's personal attack on her during the process, and dealing with his negotiation strategy, she and her team responded in the Canadian way.

"For us, our approach was to always be polite. We tried to always be friendly. That is always our national way. We believe strongly in using fact-based arguments and we did that, but to know what your bottom lines are and to stand firm in defence of the national interest," said Freeland.

"We were absolutely clear about that and ultimately that was understood."

Despite efforts from U.S. negotiators, Canada fought hard to keep Chapter 19 — a key provision that gives independent panels the ability to resolve disputes involving companies and governments, as well as Chapter 20, the government-to-government dispute settlement mechanism.

She said Canada did not waver during the talks, and that she felt supported by Canadians for staying steadfast.

Freeland recalled being stopped and hugged by a stranger at the grocery store and how at another time a fellow passenger tried give her a business seat during a flight back from Washington.

"People were just so nice," she said. "But what I would call Canadian nice: resolute and nice. And that was really important."

Although it's been reached, the USMCA deal still faces a number of hurdles before it's officially finalized.

“There’s no question this will be on the top of the agenda" next year, he told the news agency.

Congratulations to Minister Freeland, her staff, and the entire negotiating team for, despite churlish interventions from various US entities, they maintained their outward calm and professionalism in the face of an unprecedented eruption of childish spite from south of the border. It must have been heartening to know we were not the only targets of irrational, false claims and temper tantrum reprisals.

Now after all the urgent bullying pressure the infamous Mr. McConnell lazily acknowledges the deal won't be approved until 2019 - when it can best be used as an election weapon. The White house crows in triumph - but the old roosters never know the day the ax will fall.

As for Mr. Scheer and his "I would have signed a better one" - he once again presents the persona of the boastful 7 year old trumpeting his feeble claims of competence.

When I read the headline, it

When I read the headline, it seemed almost intended as a criticism. However, I found the story touching. I love that our Foreign Minister is a real person, and am grateful of how much she gave of herself to negotiate this deal. Whether the agreement is perfect or not, it is no doubt much better than the alternative. I was impressed as well that our Minister was flying economy back from Washington. Little details like that say a lot about the person.