In Canada, more than a million people have donned a piece of moose hide to stamp out violence against women 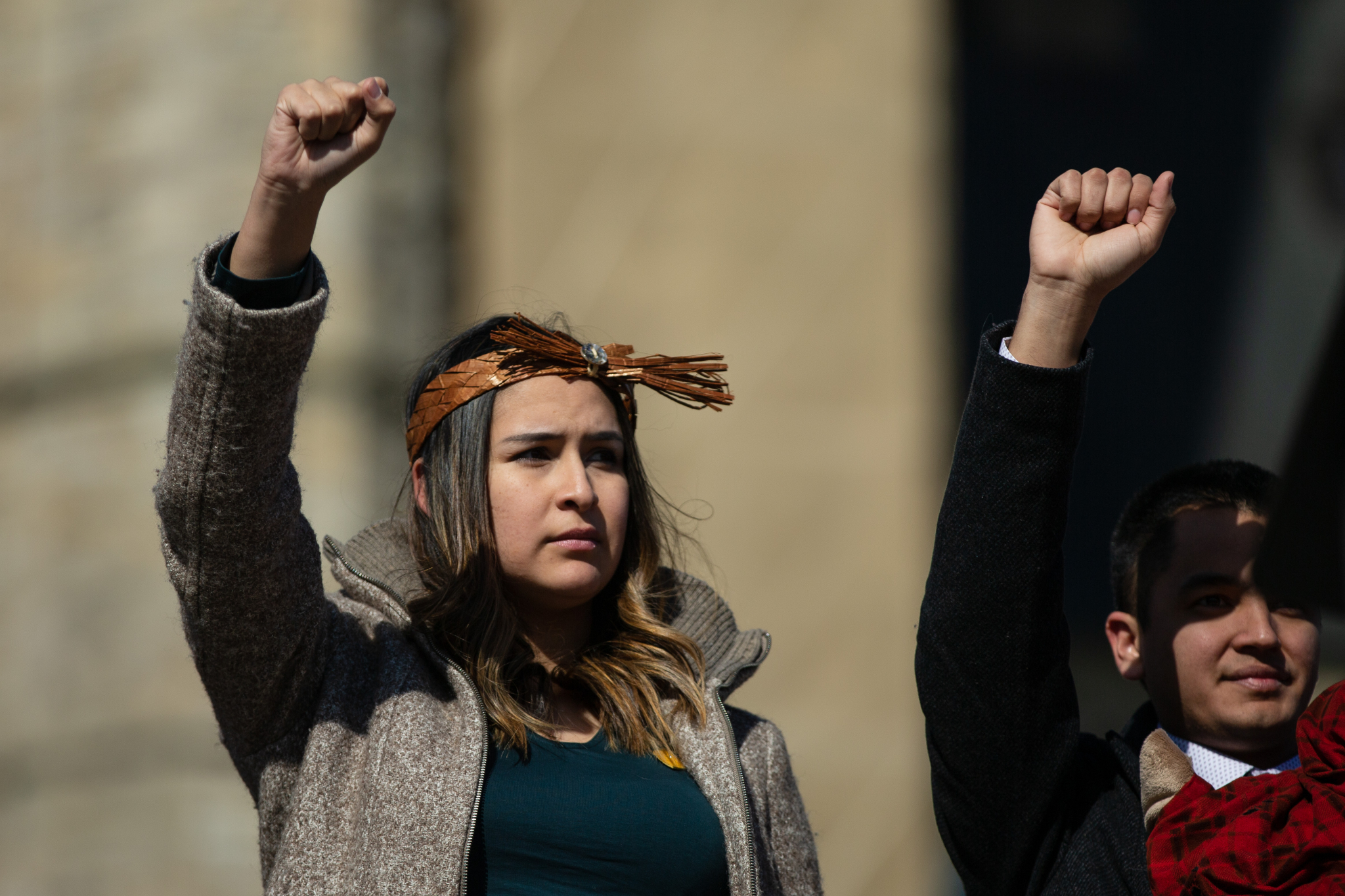 Raven Lacerte, co-founder of the Moose Hide Campaign, raises her fist on Parliament Hill in Ottawa on Oct. 18, 2018. Photo by Alex Tétreault
Previous story
Next story

Hundreds of people gathered on a cold, crisp Thursday in Ottawa to honour a national movement against violence towards Indigenous and non-Indigenous women and children.

The third national gathering of the Moose Hide Campaign included a day of fasting, workshops and speeches, a “walk to end violence” to Parliament Hill and in the evening, a ceremony and community feast.

The campaign is named from a small square of moose hide that adherents pin to their clothing to signal a commitment to stamp out violence and show respect and honour for women and children.

It’s not just about being a non-abuser: it’s about going beyond that, speaking up, taking action and holding each other accountable.

Co-founders Raven Lacerte and her father Paul, who are Carrier from Nadleh Whut'en First Nation in British Columbia’s central interior, started the campaign in 2011 and have now distributed over 1.2 million moose hide squares. Another of Paul's daughters, Sage Lacerte, is national youth ambassador.

“We’re from B.C., along the highway of tears, which is the stretch of highway where dozens of women have gone missing or been murdered,” Lacerte told National Observer.

“We were talking about what we can do to help end the violence that’s happening to the women and children in this country, and we thought that maybe if we tanned up the moose hide that we got that year — cut it up into little squares, and ask men to wear it — then that would be one way that we could help get more commitment out of the men and boys in this country to be violence-free in their lives.”

Lacerte said Prime Minister Justin Trudeau had met with her the day earlier in a show of support for the campaign.

"It was very exciting, we were able to talk to him a little bit about the campaign," she said. "He loves it, and he has a few of them (moose hide squares) already. He just talked about how he really enjoyed the work that we're doing and how he supports it."

Over a thousand Indigenous women have been murdered over the past 30 years according to a 2014 RCMP report, a staggering number that is still very likely lower than reality, given errors in reporting and differences with police identification, among other issues. Indigenous women and girls make up four per cent of females in Canada but nearly one-quarter of homicide victims.

Canada has launched the National Inquiry into Missing and Murdered Indigenous Women and Girls, but the inquiry has faced several snags, such as a lawyer resigning amid allegations of government interference.

Thursday was also the day that the final witnesses testified in St. John's, N.L., after the federal government denied a request for a two-year extension, granting just six months. Chief commissioner Marion Buller has said that's not enough time.

In Ottawa, the day-long Moose Hide Campaign event included keynote addresses in the morning at the Shaw Centre in downtown Ottawa, before the crowd split into men's circles and women's circles, with a talking stick for the circle, and shared experiences and stories. Talking sticks are instruments of Indigenous democratic participation that are passed around a circle, empowering one person at a time to speak.

Around noon, attendees gathered in Confederation Park in downtown Ottawa before walking to Parliament Hill, where they heard from several speakers including Crown-Indigenous Relations and Northern Affairs Minister Carolyn Bennett.

“We will not solve violence against Indigenous women and girls without the help of men and boys,” Bennett told the crowd.

“This is about empowering kind men, but also understanding the men who had a terrible tragedy in their lives — what happens when children are abused. This is the legacy of the residential schools: child abuse leads to anger and shame, and drugs and alcohol, and violence and suicide, and incarceration.” 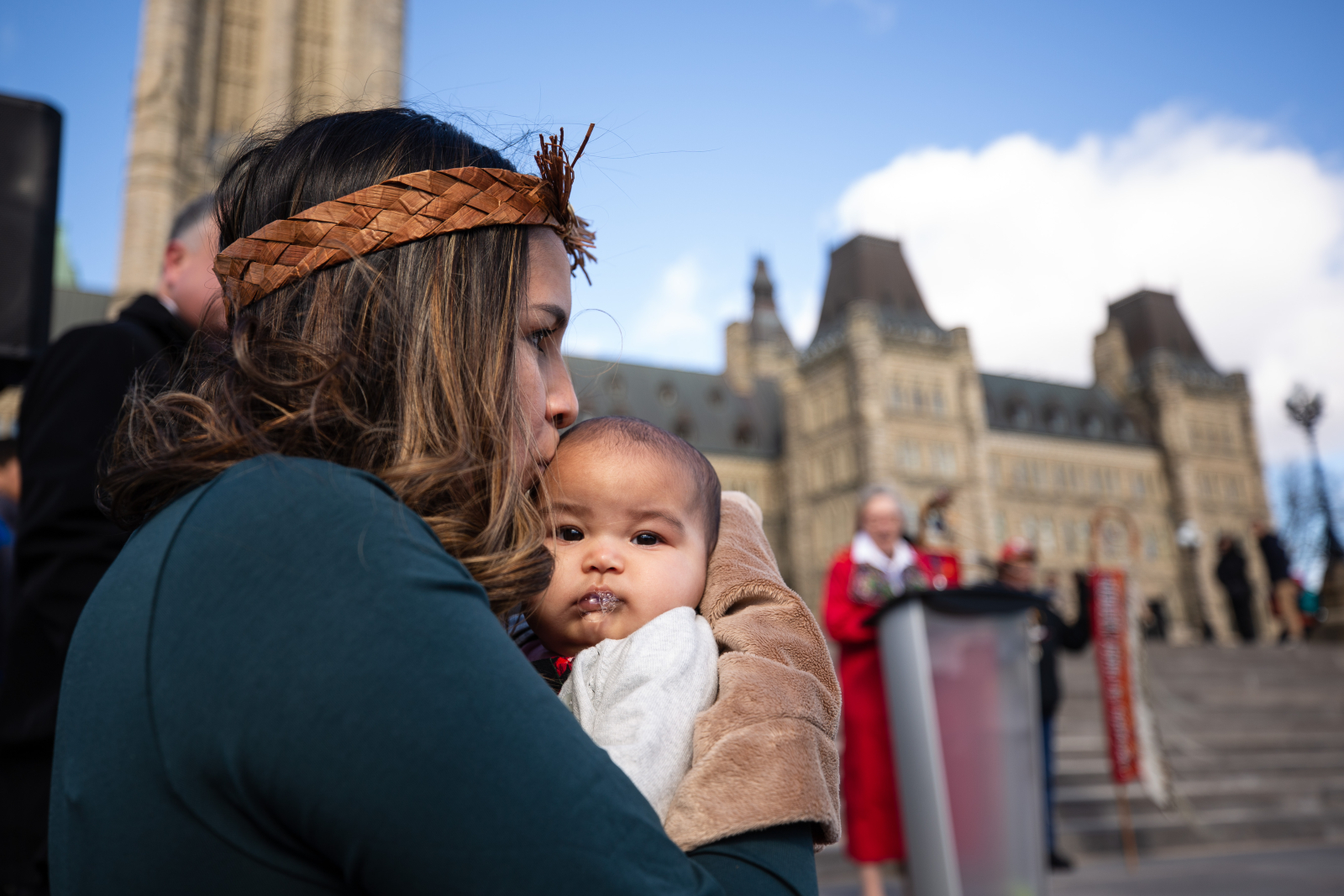 “To all the men out here: Real men do not harm women and girls,” said Joseph.

“Warriors are those who choose to cherish, honour and love women. Honourable men are those who seek and provide peace and security for our women and girls.”