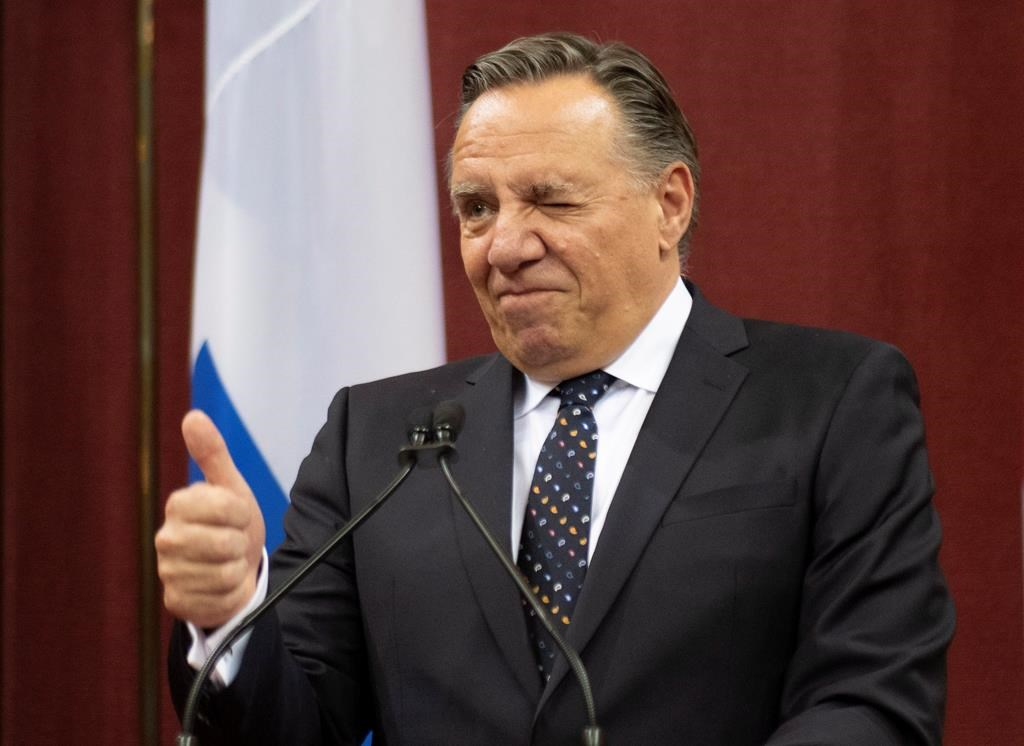 Quebec Premier Francois Legault gives the thumbs up and winks during a ceremony at the National Assembly where he was sworn in as Premier of Quebec, on October 18, 2018 at the legislature in Quebec City. Photo by The Canadian Press/Jacques Boissinot
Previous story
Next story

But as he was sworn in as premier, Legault offered assurances that even though his Coalition Avenir Quebec party was handed a large majority in the Oct. 1 election, he would seek consensus for his reforms.

"This government is your government," he said in a speech after the ceremony at Quebec City's legislature. "This cabinet is at your service. We will work with all our strength and with all our heart for you, but we will need you.

"If we are millions pushing in the same direction, anything is possible."

Legault's 20-minute speech focused largely on his commitments to health, education and the economy, while avoiding his controversial proposal to reduce immigration.

However, he made it clear he would be sticking to his promises, including a plan to ban the wearing of religious symbols for state employees in positions of authority, which has already been the subject of protests in the Montreal area.

"We will never create unanimity," he said. "Besides, it is out of the question to back down before pressure groups or the first small tremors."

Legault received a long standing ovation from guests after he was sworn in by Lt.-Gov. J. Michel Doyon.

The 61-year-old Air Transat co-founder fulfilled a promise to form a gender-balanced cabinet with 13 women and 13 men. He named women to important portfolios such as health and justice.

While his team includes a mix of newcomers and political veterans, he pointed out that he and former Liberal cabinet minister Marguerite Blais are the only members who have previously held cabinet positions.

"I don't see this as a disadvantage, on the contrary," he said.

Legault's party swept to victory in the Oct. 1 provincial election, winning 74 of the legislature's 125 seats.

His government enters its first term with the traditionally dominant Liberals and PQ in disarray. Both the Liberal and PQ leaders resigned after their parties were handed crushing defeats by voters looking for change.

Philippe Couillard's Liberals lost more than half their seats to finish with 31, while Parti Quebecois leader Jean-Francois Lisee stepped down after losing in his own riding and seeing his once-mighty party fall to 10 seats, below the threshold for official status.

The Liberals have since been reduced to 29 seats after Couillard resigned and another member, Guy Ouellette, was ousted from caucus to sit as an Independent. Quebec solidaire holds 10 seats.

On Thursday, Legault sought to reach beyond his base, which is largely concentrated in the Quebec City region and the French-speaking regions.

His speech included direct appeals to Quebec's English-speaking and Indigenous communities as well as a promise to fight climate change, an issue that did not figure prominently in the Coalition campaign.

After focusing on renewal, Legault ended his speech with a nod to Quebec's past.

The one-time Parti Quebecois minister chose to invoke Rene Levesque, the late sovereigntist premier who himself changed Quebec's political landscape when he founded the PQ 50 years ago.

"I end by telling you, I love Quebecers, and to answer a man who has inspired me all my life, I have the profound conviction that yes, we form something like a great people," Legault said, echoing Levesque's election-night victory speech in 1976.