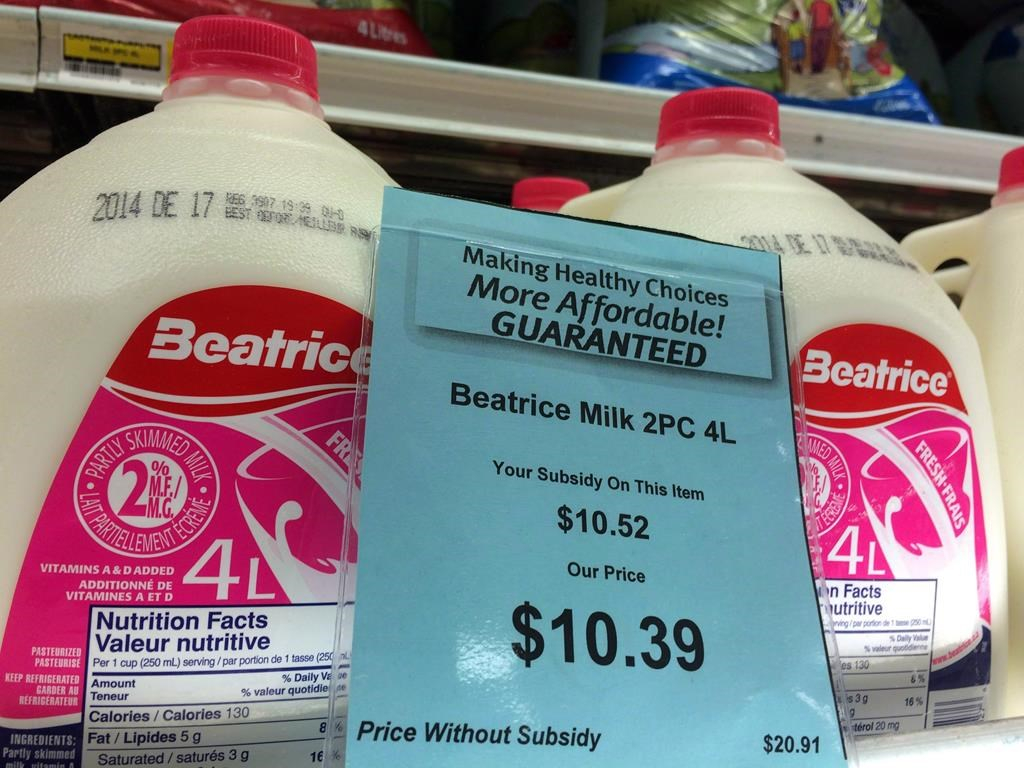 A price tag lists the price and subsidy of a 4-litre jug of milk at a grocery store in Iqaluit, Nunavut on December 8, 2014. File photo by The Canadian Press/Sean Kilpatrick
Previous story
Next story

Talks to reform subsidies intended to eliminate the $10 carton of milk face by northern families remain stalled over concerns from Inuit that they don't have enough control over changes to Nutrition North.

"We have not been able to get to that place of a good-faith space with this government to renew this program," said Natan Obed of Canada's national Inuit group.

The group was one of five Inuit organizations that last April pulled out of an advisory committee on reforming Nutrition North.

The program subsidizes northern retailers to reduce the cost of perishable food, which can be several times higher in the North than it is further south. It costs more than $75 million a year and is spread out over 121 communities in three territories and seven provinces. Most of it goes to Inuit regions.

Ottawa says that between 2011 and 2015, the cost of a food basket for a family of four dropped about five per cent and the weight of eligible items shipped north increased by about 25 per cent.

But a University of Toronto researcher found in 2016 that the price drop wasn't the result of the subsidies, but a function of when the numbers were calculated. The study concluded that Nutrition North has resulted in grocery shelves full of stale, unreliable food that isn't much cheaper.

The federal government is reviewing the program and has held public meetings across the North. The Department of Intergovernmental Affairs, Northern Affairs and Internal Trade did not offer a response on Friday.

Obed said Inuit groups want a real voice in what shape the reforms take. The committee his group walked away from had no decision-making power.

Inuit have that kind of influence in other departments from Heritage Canada to child welfare, Obed said.

"Inuit are working with specific government departments to meaningfully participate and design the end product."

Nor was the government paying enough attention to specific Inuit concerns, such as access to "country food" — obtained through hunting and fishing and more fresh, nutritious and culturally preferred, Obed said.

"We've talked quite a bit about the need for our country food to be subsidized."

A previous subsidy program called Food Mail offered support to hunters by reducing the cost of ammunition, for example.

Nutrition North only subsidizes country food if it comes from one of the few federally inspected processors in the North.

"Our food costs are astronomically higher than southern food costs."

Inuit families also tend to be poorer. Obed said the median Inuit income in Nunavut is $70,000 less than the corresponding non-Inuit income.

"The poverty and buying power of Inuit preclude us from accessing healthy food and perishable food. It is essential for Inuit to have access to healthy, perishable foods within our stores."

Ottawa, Inuit agree on compensation for forced relocation in 1950s