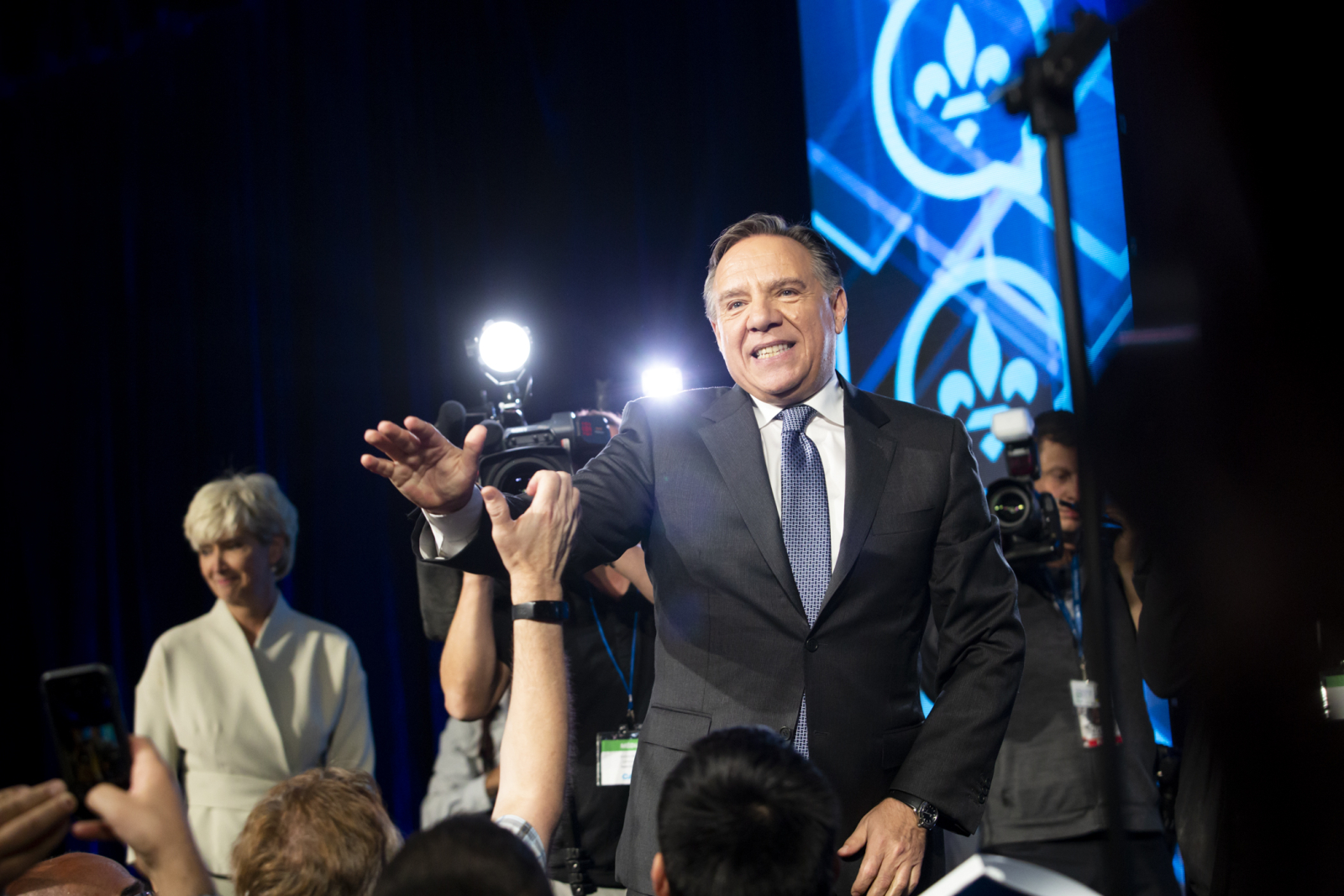 A lack of solidarity by a major Quebec feminist group towards Muslim women has many fuming. During a 10-hour special assembly last weekend, the Fédération des femmes du Québec (FFQ) decided to once again postpone issuing a statement of unconditional support for Muslim women who wear religious head coverings.

New Quebec Premier François Legault has stated that he’s prepared to ban religious symbols for teachers, judges and police officers, and he’s willing to override protections in the Charter of Rights and Freedoms to do so.

Why does the FFQ see sex work as a legitimate choice, but not the hijab?

During the same meeting, the FFQ took a controversial stance to support sex workers, officially declaring that women have agency and independence and should be free to choose the sex trade as a legitimate career choice.

Their reasoning does not seem to extend to Quebec’s Muslim women, however, who choose to wear religious head coverings, such as hijabs and niqabs. Citing a need for more clarity on the issue, the federation opted instead to postpone issuing a supportive statement. The federation's current position - adopted in 2009 -- says that the FFQ was opposed to a ban of religious symbols for people working in public services, with the exception of judges, Crown prosecutors, police officers, prison guards, the president and vice-president of the National Assembly, as well as people working in fields of security that require a ban or restriction of some religious symbols. Their decision to postpone issuing a new statement of support has both angered and frustrated many Quebec feminists who see it as political cowardice and an egregious lack of solidarity with Muslim women.

While the FFQ, which describes itself as non-partisan, has made great strides in recent years to emphasize the importance of intersectional feminism, it remains a largely Francophone, largely white organization that has failed to understand the challenges confronting marginalized women and religious minorities who currently bear the brunt of much of the new government’s state-sanctioned “othering," public stigmatization, and vilification.

“I’m disappointed the FFQ did not arrive at a consensus supporting a strong proposition in favor of the rights of Muslim women to participate fully in public life in Quebec, in particular to pursue the profession of their choice,” says Idil Issa, Quebec writer, activist, and vice president of La Fondation Paroles de Femmes, an organization that aims to create inclusive spaces for racialized and Indigenous women. “The recent pronouncement of the current government regarding the firing of school teachers who do not comply with a dress code infringing on their freedom of conscience is one which merits a strong response from feminists of all stripes.”

While many understand that religious head coverings do not enjoy consensus (even among Muslim women) and there are many who see them as symbols of female subjugation, a woman’s freedom of choice trumps all. "The FFQ's mission aims not to leave any woman behind," reads the FFQ press release. "We support all women, without judgment, in every step of her life and in every one of her struggles."

If, after all, that's the very reasoning that propelled the FFQ’s proclamation on sex work, why does the same logic not apply on the question of hijabs?

“As feminists, we cannot hope to align perfectly when it comes to our preferences and lifestyles,” Issa says. “What we can hope to agree on is that we should each be afforded the right to choose how we dress. That the threat of dismissal of women who refuse to comply with unethical dress codes in Quebec wouldn't elicit the outrage and condemnation of our most important women's group begs an important question: how relevant will the FFQ remain as the leading edge of women's rights in Quebec? Will resistance to change and an inability to empathize with the ‘other’ dilute the FFQ's effectiveness as a bulwark against the erosion of women's rights in Quebec? In my estimation, the answer is still to be decided.”

How long does the FFQ need to deliberate on this question?

The main reason the decision was delayed is because, according to FFQ members, they “needed more information to understand the connection between the official position taken in 2009 (in favour of the ban) and the new one.” This reasoning has, of course, frustrated those who understandably feel that a decade-long debate on religious symbols was enough time for most people to clarify their thoughts on the topic and stop allowing women’s bodies to be used for political gain. Public discussion dates back to debate around the Report on Cultural and Religious Accommodation and the Quebec Charter of Values and continues with the new Coalition Avenir Québec (CAQ) government.

“The FFQ’s board of directors feels strongly about taking a stance on this important issue,” says Marlihan Lopez, the federation’s vice-president. “But many of our members have said they don’t feel ready.”

As a disappointed activist, Lopez has vowed to work on the proposal and mobilize all concerned groups so that by May when the FFQ’s General Assembly takes place, a majority of FFQ members will be convinced of its necessity and it will go through.

“I’m ashamed of our lack of action on this issue,” she says. “How are we going to tell Muslim women that we believe in equality, but do nothing to show solidarity when we see that hijab-wearing women are being targeted and demonized? This is urgent; it can’t wait. We need to step up to the plate, if we want to be leaders in the women’s movement in Quebec.”

Ultimately, this debate points to the privilege of having the time to leisurely ponder something to avoid upsetting a few people who are not in agreement with religious headgear because it doesn't affect them personally. For too many Muslim women this isn’t a mere conversation point or a philosophical debate; it’s real life and could affect them at their place of work and in their public lives.

“How can a majority of white, middle-aged, middle-class women be leaders in intersectionality?” asks Lopez. “They need to trust these Muslim women and their agency, and they need to listen to them when they share their experiences. It’s our collective and individual responsibility to educate ourselves so we can deconstruct our biases and to take a position on this.”

What’s the FFQ’s mission and how can it fulfill it?

Despite the federation’s reticence on this specific issue, it issued a press release Oct. 9 that cast a critical eye on Legault’s recent electoral promises and questioned his values test and how exactly it would protect gender equality.

“It is unacceptable that, once again, women’s bodies are instrumentalized. [….] Women’s equality deserves to be discussed as issues in and of themselves and not as an excuse to put in place structures that will serve to discriminate against immigrants.” The FFQ is currently in court fighting the proposed Bill 62, which wants to ban the niqab and burqa in public spaces.

In the past, the federation has been instrumental in the many gains Quebec women have made. Since its beginnings, it has criticized programs, policies and laws to ensure that women are taken into consideration. The federation’s mission statement – to promote and defend the interests and the rights of women and to fight against all forms of violence, discrimination, marginalization and exclusion towards women – also makes it clear that its goal is to fight for all Quebec women. So why the reticence and the decision to delay a final declaration on this issue? Does this not show a serious lack of political courage and an unfortunate lack of solidarity when Muslim women in Quebec most need it? Is religion such a taboo in Quebec that it supersedes feminism and women’s equality? And if that’s the case, how can the FFQ claim that it represents and fights for all women when it turns a blind eye on legislation that will disproportionately and severely affect and punish Muslim women?

FFQ president Gabrielle Bouchard clarified that the proposal was merely delayed, so they could present a stronger argument during their General Assembly in May. “We will continue to work so that the voices of all women are heard,” she was quoted as saying on Facebook. But while many remain hopeful, they also remain skeptical about the double standards.

“By constantly postponing the vote on the hijab, we are continuing to question women’s choices,” says Mélodie Nelson, a writer, former sex worker, and FFQ member. “We are ranking women: which ones are free, which ones appear to be free, which ones aren’t free and don’t even know it, and which ones aren’t free at all. What’s worse, we’re deciding which ones deserve our solidarity, our support, and our involvement. […] By delaying the vote, we’re refusing to be there for minorities, we’re refusing to listen to them. Instead, we’re listening to our fear, our panic, the violence of people who don’t understand and who present themselves of ‘saviours’ of women who don’t need their saving. [Muslim women] want to be acknowledged and respected.”

Despite continuing to support the FFQ and its work, Éve Torres was also discouraged by the recent letdown. Torres is a Muslim who wears a hijab and was the first veiled woman to run in a Quebec provincial election as a candidate with Quebec Solidaire. She had to contend with her own share of prejudice, vandalism to campaign posters, and a few Quebec opinion columnists suggesting she was an “Islamist.”

“We know that Charles Taylor has already backtracked on the commission recommendations, realizing the real-life consequences they had on Muslim women’s lives and on social cohesion," she says. "And more recently, Bouchard also wrote an article that the new CAQ government was using the recommendations in bad faith and wasn’t ready for this debate. […] This debate has been going on for 10 years!"

In 2007, Quebec's Bouchard-Taylor Commission, with Charles Taylor and Gerard Bouchard at the helm, investigated the issue of reasonable accommodation of minorities in the province and issued a report with their recommendations. Since then, the report has most often been used as a source of strife and less for any concrete solutions.

"It’s been 10 years that politicians and members of the media have been creating social division and used us for vote pandering," Torres says.
"With the Quebec mosque shooting and more recently with the shooting at the Pittsburgh synagogue we’ve seen that words and policies that seek to demonize people for their faith have consequences.”

Because of current events, Torres was convinced that FFQ members would understand the urgency of showing unconditional support to women wearing the hijab.

“As a feminist, it’s always been clear to me that I should support women unconditionally and respect the choices they’ve made,” she says. “As we now wait, so some women can take more time to ponder whether all women deserve the same rights and freedoms, the same treatment, the same access to employment and financial independence, the same safety and same dreams, right-wing populist groups continue to take up more space in the public discourse and women continue to be the targets of discrimination, hate, and violence… Which institution and which political party will have the necessary courage to fight for real justice and equality?”

One way to make a statement

One way to make a statement on this whole religious symbols nonsense might be for people to wear as many `religious symbols' they can manage. That would definitely include a fair approximation of the `historical-not-religious-symbol` now hanging in the chamber. I think the way to fight nonsense is to illustrate just what nonsense it is.