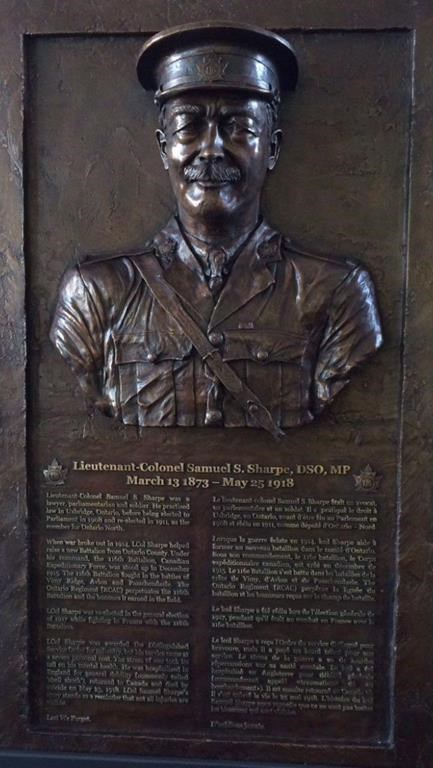 Lt.-Col. Samuel Sharpe is poised to finally return to the foyer outside the House of Commons, more than a century after the former member of Parliament and First World War veteran returned traumatized from the killing fields of Europe and took his own life.

A bronze plaque bearing Sharpe's likeness is to be unveiled during a ceremony on Parliament Hill Wednesday, the latest sign of the country's changing attitude towards the psychological harm that Canadian soldiers have suffered from war for generations.

The Royal Canadian Legion last week took the unprecedented step of naming the mother of the first soldier to die by suicide after serving in Afghanistan, Pte. Thomas Welch, as this year's Silver Cross Mother.

"This is a seminal year for recognizing mental illnesses as a casualty of war," Veterans Affairs Minister Seamus O'Regan said in an interview. "And so many Canadians, frankly, are already there. They want this. So I'm happy we're kind of catching up."

Sharpe was a sitting member of Parliament when he helped raise the Canadian Expeditionary Force's 116th battalion and then headed overseas to command the unit during the First World War.

Not only was Sharpe involved in some of the biggest and bloodiest Canadian battles of the First World War, he was re-elected in absentia only a few weeks after the end of the Battle of Passchendaele, in which he received an award for gallantry.

But Sharpe would never retake his seat. The strain and trauma of Passchendaele, where more than 16,000 Canadians were killed or wounded in months of fighting in 1917, including one of his closest friends, would be too much.

Sharpe was hospitalized for "nervous shock" a few months later and returned to Canada. On May 25, 1918, he jumped from a window at the Royal Victoria Hospital in Montreal.

There is already a sculpture in Centre Block's foyer dedicated to the only serving MP to have died in combat; Lt.-Col. George Baker was killed during the Battle of Mount Sorrel in Belgium in June 1916 and his statue was erected in 1924.

But there has been a growing sense in recent years, which coincided with more awareness about the reality that many veterans are suffering from psychological injuries, that it was time to honour Sharpe — and send a message of support to those who needed to hear it.

One of the most vocal advocates for recognizing Sharpe's legacy has been Conservative MP Erin O'Toole, who was veterans affairs minister during the final years of the Harper government.

O'Toole, who represents part of Sharpe's old Ontario riding, sponsored a motion in May — on the eve of the 100th anniversary of the former MP's death — calling for the plaque to be installed in the foyer. The motion passed the House of Commons with unanimous consent.

"The whole point was before the 100th anniversary of the Great War, we were going to make right an omission from almost a century ago where George Baker was recognized and Sam Sharpe was totally forgotten," O'Toole said on Tuesday.

"It was always about showing that as a society, we're mature enough to recognize that attitudes 100 years ago were quite abysmal when it came to mental health, suicide, nervous shock or shell shock, and that we've learned and we can talk about it."

A landmark study by Veterans Affairs Canada last year found that the risk of suicide among male veterans was 36 per cent higher than among men who had never served in the Canadian military.

Even more worrying was that men under the age of 25 were 242 per cent more likely to kill themselves than non-veterans of the same age, while the risk among female veterans of all ages was 81 per cent greater than for women who hadn't served.

Yet Sharpe's return will be short lived. The plaque, which has been in storage on Parliament Hill for the past couple of years amid a political debate over what to do with it, will be moved to the Royal Ottawa Mental Health Centre at the end of the year.

That's because Centre Block is scheduled to close for renovations around Christmas and will stay closed for the next decade.

"When the renovations are finished, he will go back to his rightful place to remind members of Parliament as they walk through," O'Regan said, but O'Toole worried that Sharpe will be forgotten again unless the plaque is officially installed in the foyer first.

The plaque is to be displayed outside the House of Commons, but officials say it will not be formally affixed to the wall or displayed in a permanent way because of the coming renovations — which O'Toole insists is not what his motion demanded.

O'Toole, who accused the government of "dragging their feet" on recognizing Sharpe over the past few years, asked Commons Speaker Geoff Regan on Tuesday to look into the matter, which Regan said he would do.

In the meantime, O'Toole hoped that Sharpe's story will reduce the stigma of mental illness and show that anyone — from a private to a senior officer and MP — can be affected by war.

"Sam Sharpe was one of the most accomplished, iconic people in southern Ontario in that era," O'Toole said, "and he was struck by operational-stress injuries, which can be something that is a byproduct of war and service."

'Misfits all getting together:' Veterans with PTSD bond over military vehicles