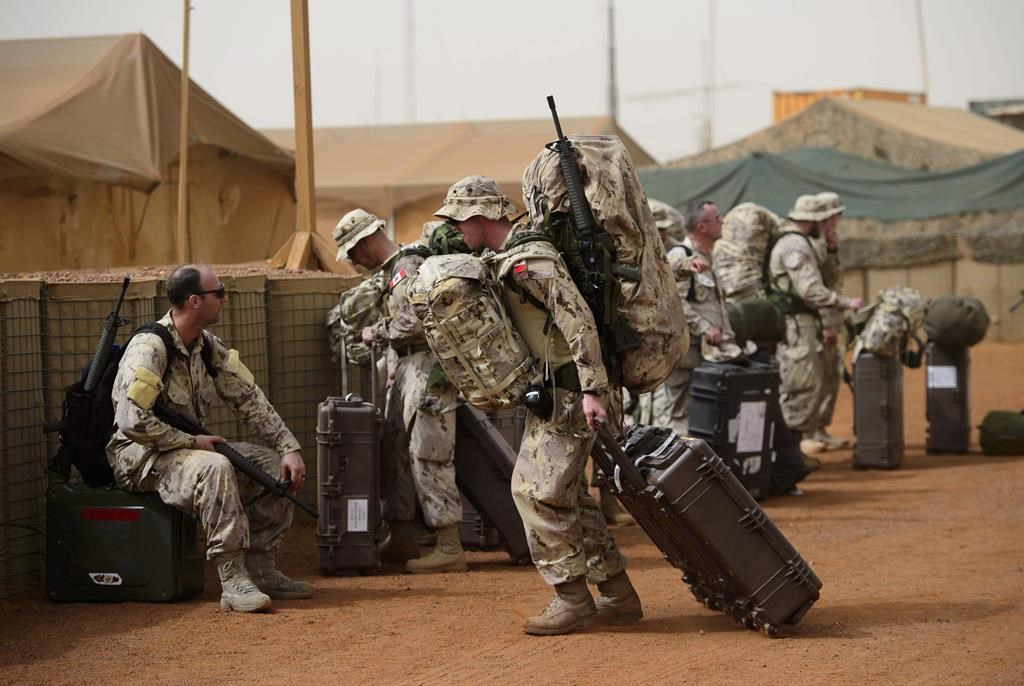 Canadian troops arrive at a UN base in Gao, Mali, on Monday, June 25, 2018. File photo by The Canadian Press/Sean Kilpatrick
Previous story
Next story

The Trudeau government is resisting a United Nations request to extend Canada's peacekeeping mission in Mali so medical evacuations can continue while replacements for Canada's personnel arrive, according to multiple sources.

Canada has eight helicopters and 250 military members in the sprawling West African nation to rescue injured peacekeepers and UN workers and to transport troops and equipment.

The year-long mission is scheduled to end in July, at which point the Canadians will pack up and start heading home.

While an official announcement has not been made, sources tell The Canadian Press that Romania is expected to take over from Canada. Defence Minister Harjit Sajjan visited Romania last weekend.

But the Romanians aren't expected to arrive until October or November, months after the Canadians have left, which would create a months-long gap in lifesaving evacuations that the UN will have to fill.

The UN contracted civilian helicopters in Mali for a month this past summer to provide emergency medical evacuations between the time a German-Belgian helicopter detachment left and Canadians arrived, but the gap this time will be longer.

UN officials have also said civilian helicopters can't provide the same level of medical support as military aircraft, and that they are more restricted in when and where they can fly.

Yet while the UN has quietly asked Canada about extending its mission, the sources said the Liberal government has firmly resisted.

Sajjan's spokeswoman Byrne Furlong would not comment on any discussions Canada has had with the UN, but she did appear to close the door on any extension by noting that Canada's commitment to the peacekeeping mission in Mali was for one year.

"The mission will be complete at the end of July 2019," Furlong said in an email, adding: "Just as we worked with German forces when we took over with our air task force, we will work with the contributing country that replaces us."

Canadian peacekeepers have so far conducted four emergency evacuations in Mali. The most recent was on Nov. 1, after two civilians were injured when they were attacked with an improvised explosive device while driving.

Canadians have also delivered 77 tonnes of cargo and transported more than 1,000 UN personnel since the beginning of August.

The UN considers helicopters essential to the mission in Mali given the threat of IEDs and ambushes laid by jihadist extremists and other armed factions in the country, many of which are targeted at peacekeepers.

The peacekeeping mission in Mali remains the most dangerous UN operation in the world, with 22 peacekeepers killed this year and 177 since it began in 2013.

The mission followed a rebellion in the north and a coup in the capital in 2012 that threw the country into turmoil. While a tenuous peace was re-established, recent years have seen a resurgence in violence among different groups thanks to poverty, drought and an influx of Islamic jihadists.

While the UN has not publicly asked for Canada to stay in Mali beyond July, NDP defence critic Randall Garrison said members of the House of Commons defence committee picked up on the request during a trip to New York last month.

The Liberals have talked about the importance of supporting the UN and Mali, but Garrison accused the government of doing the bare minimum after finally relenting to years of requests from the UN and close allies to send helicopters.

If the government were truly committed to Mali, he said, it would not only extend Canada's peacekeeping mission but also increase its political, diplomatic and aid presence in the country to make it a priority.

"In terms of the humanitarian crisis, in terms of arms trafficking, recruitment of extremists, drug trafficking, human trafficking — like the whole avalanche of things that will be extremely negative if this mission fails," Garrison said.

"There is a fragile peace ... and if you don't support the peace process, the alternatives are quite bleak."