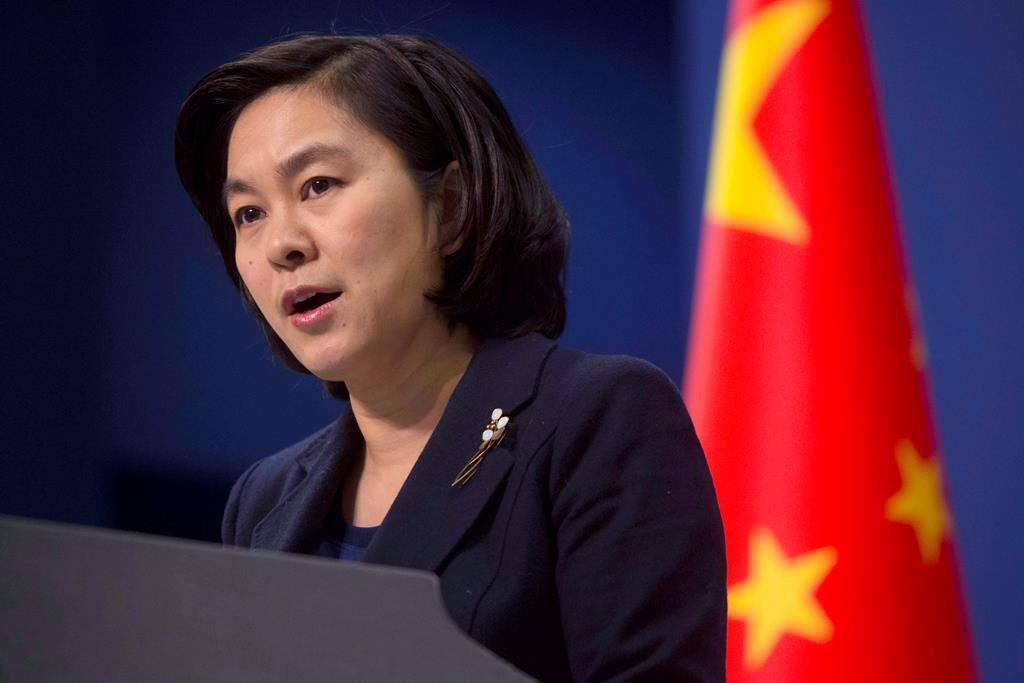 Canada stood firm against Chinese criticism Thursday after the Trudeau government rallied more than a dozen countries in expressing concern to Beijing about its jailing of hundreds of thousands of its Muslim minority.

A Chinese foreign ministry spokeswoman accused Canada's envoy and 14 others of going beyond their diplomatic roles by sending a letter that expressed concern about the incarcerations of China's Muslim minorities in re-education camps in the northwestern region of Xinjiang.

Spokeswoman Hua Chunying told reporters the letter violated the terms of the Vienna Convention governing diplomatic relations and that the envoys should not "interfere in the internal affairs of other countries."

She noted the letter, which was spearheaded by Canada, was based on hearsay, despite widely distributed reports from detainees, relatives and officials documenting the sweeping and seemingly arbitrary detentions.

A well-placed source from one of the 15 signatory countries also confirmed to The Canadian Press that Canada led the effort to send the letter.

The United Nations estimates as many as one million Uighurs and other predominantly Muslim minorities are being held in arbitrary detention.

"Canada is deeply concerned by credible reports of the mass detention, repression and surveillance of Uighurs and other Muslims in Xinjiang," said Adam Austen, a spokesman for Foreign Affairs Minister Chrystia Freeland.

Canada called on China to release all "arbitrarily" detained Muslims earlier this month at the UN where China's human rights record was under review. Freeland also raised their plight with her Chinese counterpart at the UN General Assembly in September, said Austen.

"Canada also regularly raises concerns about Xinjiang with Chinese authorities both publicly and privately, bilaterally and multilaterally, and will continue to do so," said Austen.

But Canada is now part of a shrinking group of countries that are speaking out against China. Of the 130 countries that commented on China's human rights record at the UN review, only 15 mentioned Xinjiang, said Paul Evans, a China expert at the University of British Columbia.

"This is the old Chinese hammer, and it does not look very good in the context of 2018. The absence of transparency on this, the disinformation that has been circulated by the Chinese side — whatever your political position on this one, it makes you grit your teeth," said Evans.

The letter emerged one day after Prime Minister Justin Trudeau held a decidedly low-key version of his third-annual leaders' summit with Chinese Premier Li Keqiang on the margins of the Association of Southeast Asian Nations leaders' summit in Singapore.

The one-hour meeting in a third country represented a downgrade compared to their two previous leaders' summits — part of a high-profile initiative to reinvigorate Sino-Canadian relations — that saw Trudeau feted in Beijing and 2017 after Li was wined and dined in Ottawa a year earlier.

With a push towards free trade talks all but stalled, Trudeau was unapologetic when asked about Canada's leadership role on the contentious letter, and whether it whether it would undermine his government's pursuit of more trade with China.

"This is something that we do at the same time as we engage in constructive and positive trade talks," Trudeau said, adding that he raised questions and concerns about the plight of Muslims in his meeting with Li.

"Canada will continue to look for ways to advance and promote human rights in partnership with our like-minded allies everywhere around the world."

A former Canadian ambassador to China and a human rights advocate said it was about time somebody spoke up for its embattled Muslim minority regardless of the economic consequences.

"Having ambassadors address this issue directly and openly is far better than attempting to influence the domestic affairs of another country covertly, which has been China's preferred tactic in recent years," said David Mulroney, Canada's ambassador to China from 2009 to 2012.

Mulroney, who has urged Canada to push for deeper economic ties with China and its Asian neighbours, said Canada still needs to find "the courage to flag concerns about China's increasingly irresponsible behaviour" under its newly assertive President Xi Jinping.

"As we get deeper into the Xi Jinping era, and as concerns grow about issues such as China's brutal crackdown on Uighurs and other minorities and its increasingly aggressive interference abroad, the scope of the bilateral relationship begins to shrink."

Alex Neve, the head of Amnesty International Canada, said he was surprised to read about Canada's leadership role in sending the letter because he's grown accustomed to human rights concerns taking a back seat to trade and investment.

"China is feeling bruised. China is concerned, and that's precisely the moment at which governments need to maintain pressure."