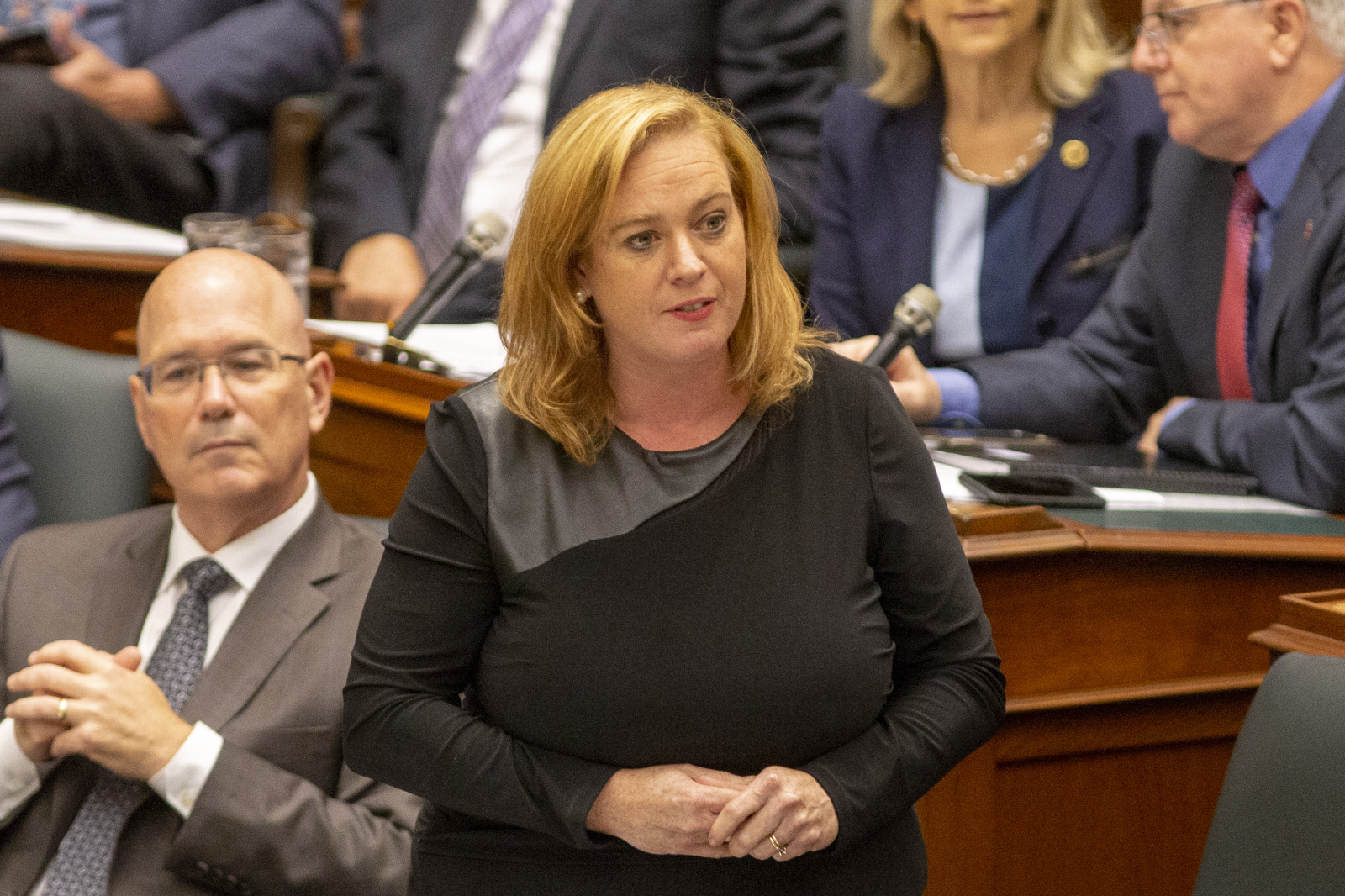 One day after Premier Doug Ford's government scrapped a scheduled increase to the province's minimum wage, Ontario has proposed changes to its social programs that aim to provide new assistance for the province's most precarious workers.

Social Services Minister Lisa MacLeod introduced the major planks of the new plan on Thursday. It proposes to increase the amount that someone on welfare is allowed to earn before their support payments are clawed back. It also proposes to increase access to employment services, and change rules that determine who qualifies for assistance.

"Social assistance in Ontario is simply not working for the people it is intended to support," MacLeod said on Thursday, blaming the previous Liberal government for taking a "one-size-fits-all approach" that left people "dependent on government and trapped in a cycle of poverty."

Opposition legislators say that these proposed changes clash with policies and legislation adopted by the government in recent weeks. These include reducing the number of paid days that an employee can take off for personal reasons from 10 to eight as well as the cancellation of a pilot program offering a basic minimum income.

But MacLeod explained how some of the changes could help Ontario residents.

One example involves a proposed change to the Ontario Works social assistance fund. Under the existing program recipients were allowed to earn up to $200 per month, without seeing their assistance payments clawed back. MacLeod said that the government would now raise this threshold to $300, with a 25 per cent exemption on any further earnings.

This falls short of a promise made by the previous Liberal government to raise the threshold to $400, with a 50 per cent exemption on any additional earnings, before any clawbacks. The Liberals said they would implement this change over the course of the next three years.

The Ford government has said it was forced to scale back Liberal programs in order to reduce the deficit and improve the province's finances. But it has still managed to improve some of the programs and services.

Another example involves those on the Ontario Disability Support Program who now receive $2,400 annually, but would now receive $6,000 annually. Recipients will see 75 per cent of any earnings above that higher limit taken off their benefits.

These "compassionate" changes will be implemented gradually over the next 18 months, MacLeod said, to create as little disruption as possible to Ontario's most vulnerable workers. Almost one million people are on social assistance in Ontario; one in seven Ontarians live in poverty.

MacLeod’s plan says the number of Ontarians on social assistance has increased by 55 per cent over the past 15 years. And, while the welfare program’s goal is to get people back to work, there are 255,000 people in the Ontario Works program, with very few leaving.

Despite this, MacLeod did not share any details about how her proposed changes would affect Ontario's current spending on welfare and disability payments that now total about $10 billion per year. She also did not offer any evidence to justify the government's decision to stop an increase to the minimum wage, while increasing social assistance payments.

MacLeod told reporters that those currently receiving disability supports from the province will be grandfathered into the new system, but would not say whether fewer would be able to qualify in the future under the new rules.

MacLeod's announcement comes after a 100-day review by the government to develop what it calls a "sustainable social assistance program" that MacLeod said was "far too focused on red tape, administration and government oversight."

It also comes a few months after the Ford government moved to cancel a basic income pilot project that supported 4,000 low-income earners in cities such as Hamilton, Brantford, Thunder Bay and Lindsay, which MacLeod has previous called "a disincentive to get people back to work." The pilot program cost $50 million annually and would have seen a single person receive up to $16,989 a year and a couple receive up to $24,027 annually.

In scrapping these programs, MacLeod announced a replacement system that would streamline the provincial welfare support program, and align the definition of disability with that used by the federal government.

But, Ottawa does not have a single definition for what constitutes a disability but critics say the threshold to qualify for disability benefits under the Canada Pension Plan is higher than it is for the Ontario Disability Support Program.

The most common federal definition applies to Canada Pension Plan Disability (CPPD) applicants, who can only get support if their illness is likely to prevent them from working indefinitely. If applied to Ontarians, it could mean that those with disabilities that can work occasionally or could work eventually would be denied support.

MacLeod didn't specify whether this was the case during her announcement but noted that part of the overhaul would also involve employing "a multi-ministerial" lens to all the changes.

"If this ministry really wants to talk about lifting people out of poverty and if they really want put people off social assistance...what they would make sure is that the minimum wage is something people can live on," NDP MPP Social Services critic Lisa Gretzky told reporters after MacLeod's announcement.

"How can you call it compassionate when you cut the increase in social assistance in half to below the rate of inflation, which is effectively a cut, and people already can't survive on the allowances they have?" Ontario Green Party leader and MPP Mike Schreiner told reporters.

Schreiner said that Ontarians were already finding it difficult to qualify under the existing definition of disability in the province, and the change proposed by MacLeod was "an effort to restrict people's access to Ontario disability supports (further)."

"(MacLeod) says she wants people to go into the workforce. Well, then don't penalize the people for working. Pay them a living wage," Schreiner said. "This is just continuing to create disincentives to work for people and contradicting what the minister said."

Editor's note: this story was edited at 10:45 EST on Monday, Nov. 26, 2018 to accurately reflect the income received by someone in the Ontario Disability Support Program. We regret the error.

There's a huge error in the

There's a huge error in the article!

ODSP recipients do NOT receive $2,400 per month! That is about double what people get!

"Another example involves those on the Ontario Disability Support Program who now receive $2,400 per month, but would now receive $6,000 annually. Recipients will see 75 per cent of any earnings above that higher limit taken off their benefits."

Their website says:
"Improving earning exemptions for ODSP recipients by introducing a $6,000 flat annual exemption plus a 25 per cent exemption for earnings above $6,000 instead of the current approach which reduces support after monthly earnings exceed $200."

Please fix your article as you will make people think those who survive way below the poverty line on ODSP are whining for nothing when they can't make ends meet.

People with disabilities have it hard enough already without more false impressions being created!

Actual rates are listed by

A single person on ODSP receives $1,169 a month if they get the maximum rate

Charity, Workhouses, Debtors prison, Almshouses, beggery, welfare, workfare, - whatever terms have been used throughout history for "social assistance" - whether it has been administered by religions, by nobility, by bureaucrats of the state, has always missed its mark. It has always signaled "social failure" because, no matter how much "caritas" may have been used in its distribution it has always been an "us and them" transaction - from those who have to those who have not for whatever reason.

Whatever the reasons are, for the most part they are beyond the control of the individual; ill health/disability, dislocation as a consequence of war, famine, disaster, un/under- employment as the consequence of actions by those in control of the means of production, landowners, capitalists, government policy makers.

The largest cause of "self-inflicted" poverty is addiction and an astonishing percercentage of that is caused by undiagnosed mental/emotional affliction sometimes caused by the society itself,

All the forms of remediation humanity has devised have been tainted by the assumption that "you could be/do better if you only paid proper obeisance to the gods, if you prayed properly to God, if you really tried..... This assumption is confirmed by the mantra "there but for the grace of God, go I" - implying that the wretch in need is not worthy of God's grace. The human flotsam and jetsome is deflected from one's own responsibility and that has been solidified over millennia by the stigmatisation and the punitive attitude to the "beggers", to the "losers".

Should we be surprised to know that beggary was once a recognized and regulated occupation? It was, and in some places still is. That does not improve the situation - merely institutionalizes it. Just as most of the current "welfare" solutions penalize, stigmatize, and perpetuate poverty with all its consequent ills. I expect some socialiogist or economist has already calculated the economic and social costs of poverty - probably many times over in different eras, and under different types of sociey and government.

We know instinctively that poverty is the greatest indictment of human society's failure, second only to war.
Studies have proven that poverty is the greatest predictor of ill-health, of criminality, of incarceration, of premature death. The problem with that is the deeper root causes. Ill health also causes poverty. Racism, discrimination, systemic exploitation, injustice, all cause poverty, mental disfunction, addiction.

The issues are apparently too complex for our society to address them and solve them. Certainly, government designed "welfare" policies - when the government in play is pandering to the wealthy, to the taxpayers, to those struggling NOT to fall into the "loser" classes - is a bad mixture of condescension and punitive assumptions. None of which will ever solve the miseries God or the Fates, or our fellow humans inflict on the unfortunate.

Politicians who arrive in power from positions of privilege, without the mental or emotional competence to take the breadth and strength of "poverty" into account, will always make the situation worse. The current Ontario PC government is predictably on track to do so.