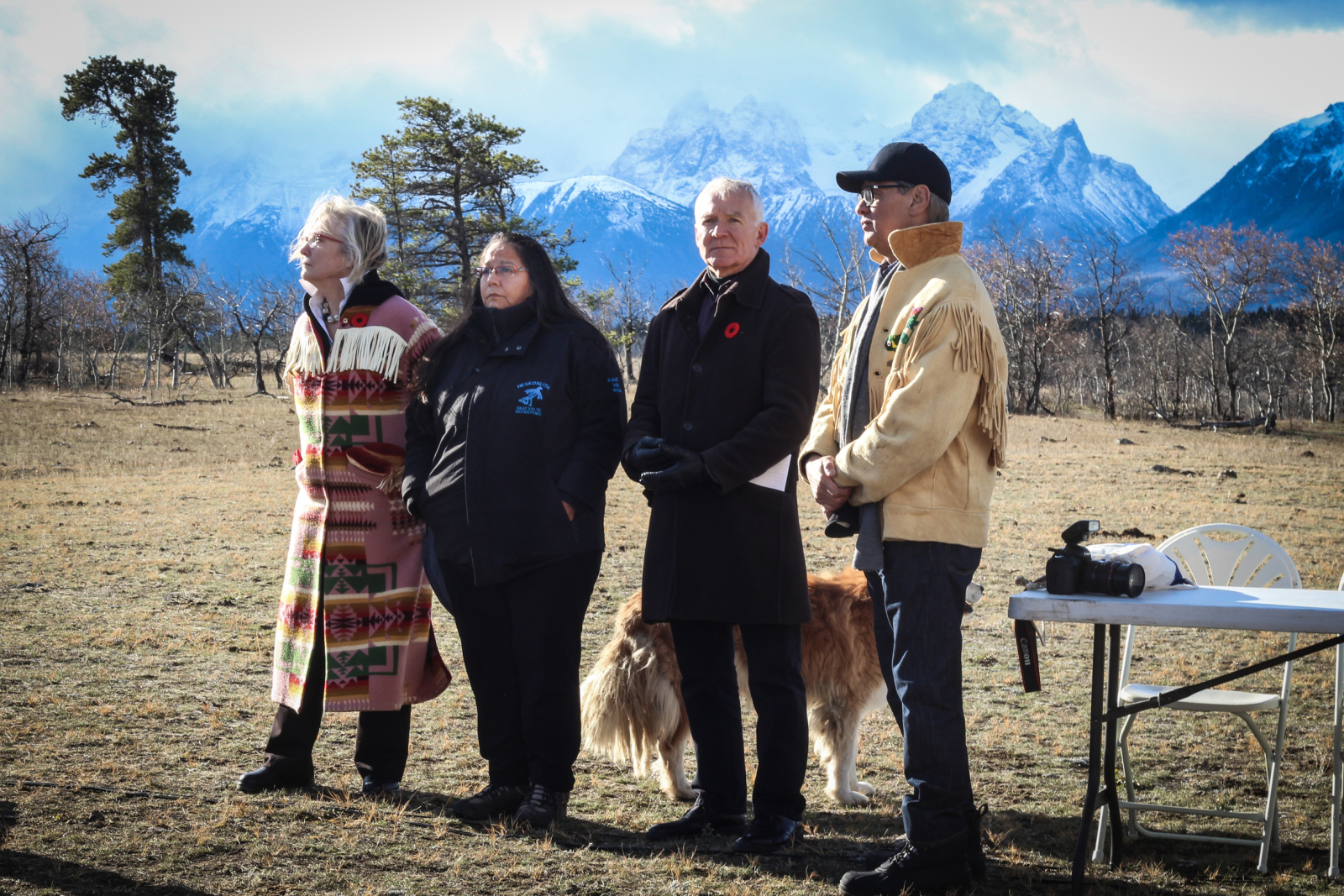 The B.C. government is being urged in a new report to revitalize its relations with Indigenous Peoples, by adopting sweeping changes to its laws and policies to ensure that they protect human rights.

The report, True, Lasting Reconciliation: Implementing the United Declaration on the Rights of Indigenous Peoples in British Columbia Law, Policy and Practices, was released on Tuesday by the Union of BC Indian Chiefs (UBCIC) and the B.C. office of the Canadian Centre for Policy Alternatives (CCPA-BC).

The United Nations Declaration on the Rights of Indigenous Peoples is an international resolution adopted by the UN General Assembly in September 2007. It reaffirms the rights of Indigenous Peoples around the world, including their right to be consulted on issues that may affect them before decisions are made, and requiring their consent on those decisions. This principle is commonly described as the right to free, prior and informed consent.

"There does not exist, nor can there exist, a 'one size fits all' model of Crown-Indigenous relations that is consistent with the UN Declaration, nor is there a single legislative or policy action that will see the UN Declaration reflected on the ground in the life of British Columbians," the report said. "Iterative actions, which pursue change systematically and build on one another, are required."

The UN Declaration was reached after 20 years of negotiations. It is also the product of an extensive, democratic and comprehensive process involving Indigenous representatives from across the world. The declaration provides a framework for justice and reconciliation, applying human rights standards to specific, historical, cultural and social circumstances of Indigenous peoples who confront historical and ongoing violations rooted in colonialism.

Canada was only one of four countries to object to the human rights declaration for almost a decade.

Former Conservative prime minister Stephen Harper said the articles were objectives to work towards, rather than a document that might become legally binding in the Canadian context. However, in 2016, Minister of Crown-Relations and Northern Affairs Carolyn Bennett (who at the time was the Indigenous and northern affairs minister), announced Canada would remove their objector status to the declaration, as a new example of a commitment to fair dealings and reconciliation with Indigenous Nations.

The new report calls for a diverse and dynamic set of legislative and policy shifts by government; action by Indigenous Nations in revitalizing government systems, and changes in the processes of relations, negotiations and agreement-making, including a shift from consultation to consent-based decision making.

The best apology is changed behaviour

In 2008, Harper made a court-mandated apology to Indigenous peoples for the violently oppressive residential school system that existed from the late 1880s until 1996.

But when an apology is offered, in any relationship, its meaning remains empty, unless actions to do better and nurture changed behaviour are implemented, the report said. It suggested that the apology should have been accompanied by the implementation, both locally and globally, of the calls to action of the Truth and Reconciliation Commission — which investigated the history of residential schools. The report said this could be done through a set of legislative and policy shifts to promote and protect internationally-recognized rights of Indigenous Peoples.

New report by @UBCIC and @CCPA_BC urges the B.C. government to implement the United Nations Declaration on the Rights of Indigenous Peoples (#UNDRIP) into Canadian laws, policies and processes as a means of real #Reconciliation.

UBCIC (a member-driven non-profit political advocacy organization) called on the provincial government to make their commitment to the United Nations Declaration on the Rights of Indigenous peoples (UNDRIP) legally binding for generations today and those to come. Kukpi7 Judy Wilson, Secretary-Treasurer of UBCIC told National Observer that existing colonial-based laws, policies and legislation in Canada don't recognize the title and rights of Indigenous peoples.

"UNDRIP gives the governments a clear pathway to address historical wrongs and engage in a better process," she said over the phone. "It's unique in B.C., because we don't have a lot of treaties, so we're the proper title-holders. In that case, the government has to reach an understanding with the nations. Indigenous Nations, whether in B.C., where most nations have no treaties, or those with treaties, hold the underlying title. We have to be at the decision-making tables."

"It's the world's universal human rights instrument, and it should be treated so," said Wilson. "We want fully and unqualified endorsement and implementation of the full articulation of the declaration."

In the Truth and Reconciliation Commission (TRC), call to action 43 calls on the federal, provincial, territorial and municipal governments to fully adopt and implement UNDRIP as the framework for reconciliation. The report also recommended that the government undertake more efforts to inform the public around the universally-recognized declaration and the reality of implementing the articles into provincial and federal legislation.

In the span of a decade, the report stated, we have moved from the UN Declaration being largely absent from political and public discourses in B.C., to being fully endorsed by the federal and provincial governments and becoming a major policy focus.

"We need to bring these documents into the school systems, and into the general public," Wilson said. "When people have more of an understanding, they won't be so fearful of it. Adopting the declaration means a better way of life for everyone — the whole thing is built on coexistence. It's what reconciliation is all about."

Wilson said the average Canadian doesn't benefit from existing colonial laws that make decisions that affect Indigenous communities and their rights to self determination, land, waters and title.

From consultation to consent

Fundamental to UNDRIP is the government's responsibility to move from a "duty to consult" to a genuine process of obtaining free, prior and informed consent of Indigenous Nations, stated the recently-released report.

"Indigenous peoples have the right to self-determination," the report said. "This includes the right to determine their own priorities and control how their lands and resources will be used and for what purposes."

First Nations, Inuit and Métis peoples also have the right to fully participate in federal, provincial and territorial decision-making processes that have an impact on all matters pertaining to their title and rights, according to the report. It also made a number of recommendations that build upon a proposed Commitment Document, signed by the B.C. government and the First Nations Leadership Council.

"A core element of reconciliation is that the UN Declaration should be embedded in B.C. law, by passage of framework legislation that is modeled on and builds upon the federal Bill C-262 (introduced by NDP member of Parliament Romeo Saganash)," said a recommendation from the new report. "This Act must be co-developed and co-drafted with Indigenous organizations and should oblige the B.C. government to adopt an implementation action plan, to systematically review all B.C. laws, policies and practices, to ensure compliance with the declaration."

The federal private member's bill, which is currently moving through Parliament, confirms the application of the UN Declaration in Canadian law and establishes a requirement for a national action plan and reporting mechanism to ensure Canadian laws align with the universally recognized rights of Indigenous peoples.

Implementation should be grounded in Indigenous self-determination, the report said, which means taking a nation-to-nation approach to dealing with distinct sovereign nations from coast to coast to coast.

UBCIC has been actively involved in the opposition of the once Kinder Morgan and now Canada-owned multibillion dollar Trans Mountain expansion project, which, if built, would triple the capacity of an existing pipeline system, allowing it to ship up to 890,000 barrels of bitumen and other petroleum products from Alberta’s oilpatch, to a Burnaby terminal in metro Vancouver.

The Federal Court of Appeal recently quashed the government's approval of the project, declaring that the federal government didn't consider all evidence and failed in its legal duty-to-consult affected First Nations.

If UNDRIP were to be implemented into Canadian law, consultation around the Trans Mountain expansion project would necessarily look entirely different, Wilson said.

"The government's new reconsideration hearings are just as faltered and problematic," she said. Wilson attended two of the original NEB hearings on the Trans Mountain expansion project, where she expressed concerns that federal officials were merely taking notes during meetings and not seriously consulting with First Nations or seeking to accommodate their rights. This was one of the points noted by the Federal Court of Appeal when it released its ruling on Aug. 30.

"The process is nothing near to free, prior and informed consent. The declaration would provide a clearer process."

Wilson said Canadians need to understand how implementation of the United Nations declaration may affect them as well.

"The average Canadian citizen doesn't benefit from the one per cent that takes wealth from our land," she said. "We need to change it so that everyone sees the benefit of any project, which requires a better process for these decisions. If we are able to implement the human rights standards, they apply to all of us, so it means better policies and processes for everyone."

If pursued coherently, systematically and in partnership with Indigenous peoples, the report concluded, as a framework for reconciliation, the declaration can help move us out of generations of conflict in courts and on the ground.

"Through undertaking this work, the current unsustainable approaches to land and resource decision-making and environmental protection can be fixed in a way that builds greater harmony and effectiveness into the future," the report said. "Through taking the next steps in this work, such as those outlined in this report, a foundation will be set for our collective future in a rapidly changing local, national and international context."