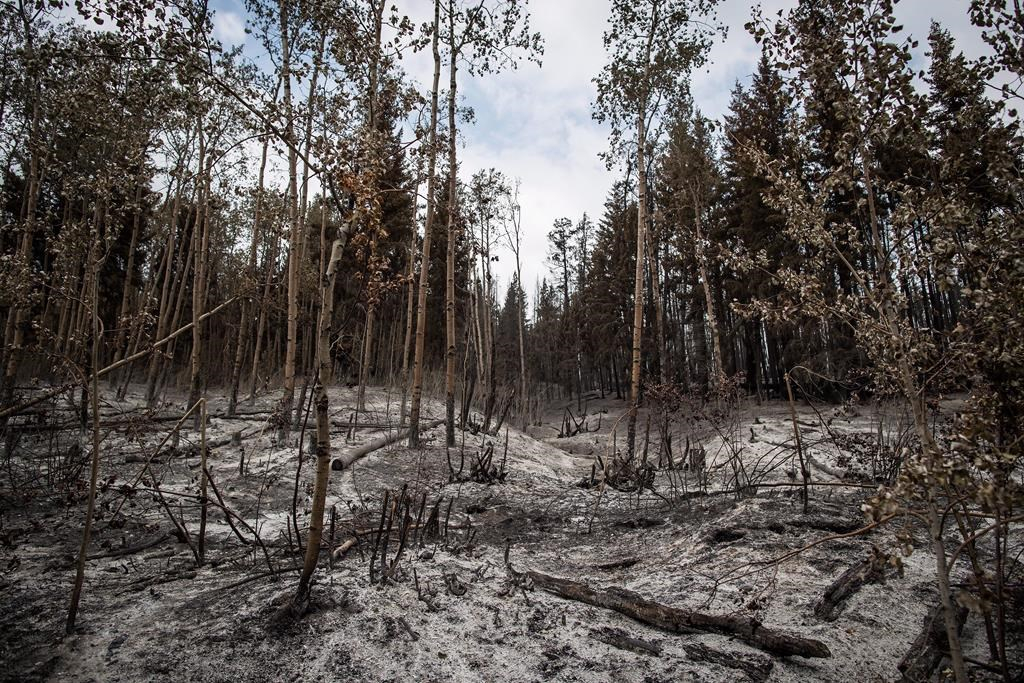 Ash covers the ground in an area burned by the Shovel Lake wildfire, near Fort Fraser, B.C., on Thursday, August 23, 2018. File photo by The Canadian Press/Darryl Dyck
Previous story
Next story

Chief Larry Nooski remembers the deafening sound of a wildfire racing toward Nadleh Whut'en territory in August, like a "low-level jet plane."

The chief of the central British Columbia First Nation felt ambushed. His community scrambled to buy equipment, train firefighters, evacuate residents and set up an emergency operations centre — spending about $400,000 but saving most of the reserve's buildings from the flames.

"We are able to carry this debt, but we shouldn't have to," Nooski said. "My worry is more (about) those smaller communities that have to go through these emergencies and make those expenditures and are not able to carry the debts."

Many B.C. First Nations that stayed to stop wildfires from destroying their communities in 2017 and 2018 are still waiting to be reimbursed by the provincial and federal governments for hundreds of thousands of dollars in expenses.

Indigenous groups say they're in an impossible situation because they can't afford to pay for training and equipment for firefighters before a crisis strikes, so they have to take on enormous debts to protect their homes as flames approach.

Nooski was set to meet with provincial officials Wednesday to deliver a report about his community's struggle to stop the massive Shovel Lake wildfire near Fraser Lake. It burned through 922 square kilometres of the nation's traditional territory, including two cabins and a smokehouse at a camp for substance abuse rehabilitation.

Prime Minister Justin Trudeau promised in August to clear up the lines of communication between the provincial and federal governments to ensure First Nations had what they needed to fight wildfires. The same day, the deputy minister of Indigenous Services Canada visited Nadleh Whut'en land and surveyed the damage in a helicopter.

"We were hoping that their visit would ease any of the application processes ... to help the area regenerate," Nooski said.

Residents of his community moved back into smoke-damaged homes without any inspection for potential health effects, he said, and many of their freezers are empty for the winter because they couldn't pick berries or fish in the summer.

Most B.C. First Nations that suffered an emergency in 2017 or 2018 have response or recovery funds outstanding, Brent Langlois of the First Nations Emergency Services Society said in an email.

"The scope does include literally dozens of communities," he said. "Losses are extensive and include infrastructure, socio-economic (and) economic viability of a community, and mental and physical health concerns."

He said reimbursement claims are onerous and time-consuming. In many cases, the outstanding funds significantly impact general operations of a community, he said.

Emergency Management BC said the province strives to reimburse valid claims within 30 days, but given the complexity of some of the claims received over the past two wildfire seasons, this objective is not always attainable.

The 2017 and 2018 wildfire seasons were the worst on record in terms of land scorched in B.C.

The Bonaparte Indian Band spent $600,000 to fight the Elephant Hill wildfire near Cache Creek in 2017 and have not been reimbursed about $150,000. Carrying the debt has a significant impact on essential services, said Chief Ryan Day.

Day said a portion of their claim was rejected because their firefighters weren't properly certified, and ideally, his band would have a fully certified crew and equipment. But its "persistent state of poverty" means it simply can't afford these things, he said.

"The root of the issue is that ... we've been prevented from having a land base where we could have adequate taxation and have adequate economic opportunities ... so that we can provide basic services to our people, like fire protection," he said.

He added that severe wildfires could be prevented with proper management of the forest, but his community has no control over the land surrounding it.

The First Nation hardest hit by wildfires last summer was the Tahltan Nation in Telegraph Creek, where 21 homes were destroyed.

In contrast with other Indigenous leaders, Chief Rick McLean said the provincial and federal governments have been fully responsive from Day 1 of the crisis.

The federal government gave them $2 million to cover costs right away, and he's confident that the $1.4 million they paid out of pocket will be reimbursed, he said.

"I'm very pleased with the federal government's response," he said. "I think they were looking for something to champion. We have the largest wildfire devastation to a community in Canadian history and the fastest recovery."