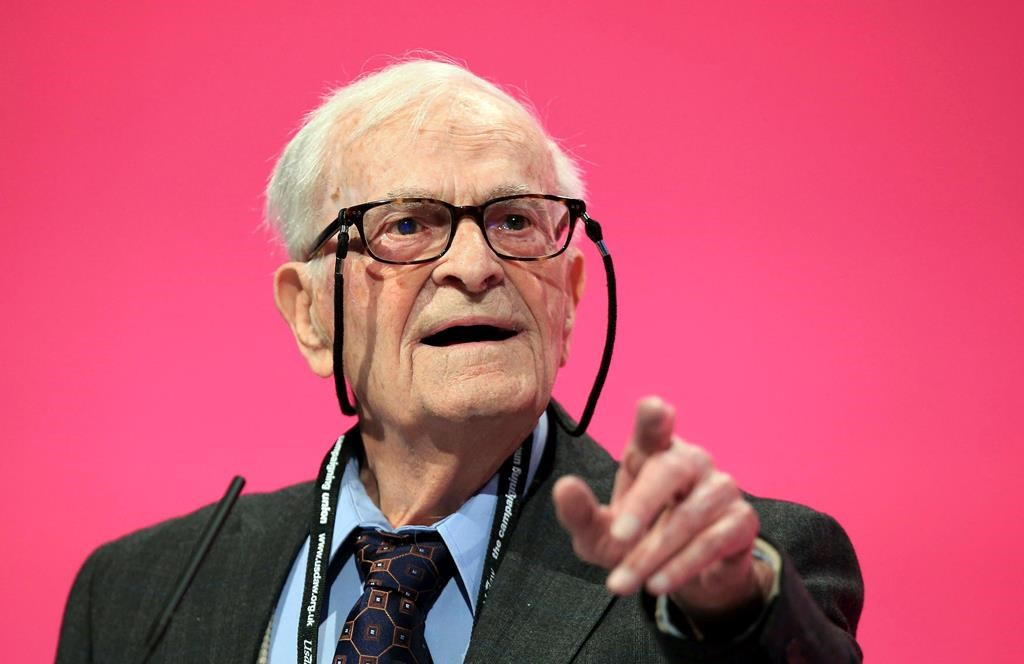 The son of internet-famed anti-poverty activist Harry Leslie Smith, a war veteran who campaigned to ensure that the sins of the past were not repeated by future generations, is vowing to lead his late father's legions of social media supporters in carrying on his legacy.

John Smith said he feared that with his father's death on Wednesday, the "living history" he embodied is on the verge of extinction, putting us at risk of perpetuating the cycle of calamity that has plagued societies past and present.

"I think that means we better grab hold of that message and run with it, or else we are in for as much trouble as Europe was in the 1930s," said Smith, vowing to take on the mantle of his father's fight for justice.

"He wanted the generations that followed him to actually build societies that actually care about all of their citizens... That's what I think he wanted his legacy to be."

The 95-year-old Smith died early Wednesday morning in hospital in Belleville, Ont., said his son, who had been issuing regular medical updates to his father's 250,000 Twitter followers.

The younger Smith said his father was admitted to hospital there last week for pneumonia after contracting an infection and suffering a fall.

"I think he has at least planted the seed in many people's hearts that we have to change the way we're going," John Smith said in a phone interview from Belleville.

"(His upbringing) reinforced his idea that when a country is only for the few and not the many, that it is a great human rights violation, which is why he always fought against that."

News of his passing was met with an outpouring of grief on social media, with Twitter users proclaiming #IStandWithHarry more than 100,000 times since last Tuesday.

Prime Minister Justin Trudeau was among the chorus of supporters extolling Smith's dedication to championing society's most vulnerable Wednesday.

"Throughout his life, Harry Leslie Smith fought and worked to make the world a better place for everyone," Trudeau tweeted. "His legacy will be profound."

British Labour Party leader Jeremy Corbyn tweeted that Smith was "one of the giants whose shoulders we stand on," and led the British parliament in a tribute to the veteran.

But despite the embrace of politicians and other notables, Smith's son said his dad's moral authority stemmed from his profound ordinariness.

Born on Feb. 25, 1923, Harry Leslie Smith grew up in squalor in the small town of Barnsley in Yorkshire, England. In his writing in several publications and books, Smith recounted the sound of his father's boots among the coal miners who made their daily pilgrimage beneath the surface of the Earth.

In 1926, he lost his 10-year-old sister to tuberculosis, a disease he attributed to the lack of sanitation in the slum in which his family lived, too poor to afford proper medical care before the formation of the National Health Service.

As the Great Depression took hold, Smith would rummage through garbage bins to quell his aching stomach, his son said, and was forced into hard labour at the age of seven to help his family make ends meet.

He witnessed the rise of fascism during the Second World War as a member of the British air force, and was deeply affected by the stream of desperate refugees he saw as victims of "other people's wars," said his son.

Amid the destruction and bloodshed, however, Smith found the great love of his life — a young German woman named Friede Edelmann, his wife of more than five decades before her death in 1999.

Having lived in the U.K. through the 1950s, John Smith said his parents decided to move to Canada, a country they believed was less gripped by the strict class divisions that defined the pecking order of British society.

"Both my mother and father thought that they needed a neutral country, one where they had no past, but they could have a future," Smith said.

Smith said Harry's hardscrabble youth manifested in a steadfast commitment to give his children the comfortable upbringing he never had.

"A lot of people who suffer that type of trauma and PTSD go inwards, and not by their own frailties, they become bitter and lash out at people," he said. "That never happened with my dad."

As he entered his twilight years, Smith was shaken by death of his 50-year-old son, Peter, in 2009.

And as the Great Recession deepened, Smith saw a resurgence in the same destructive forces that wrought havoc in the early 20th century — the dismantling of social-welfare systems, the inequities of unchecked capitalism and the rising threat of nationalism.

"He knew if he didn't do something positive with what was left for his time on Earth, he would go mad," John Smith said. "He did not want his past to become our future."

Dubbing himself the "world's oldest rebel," the nonagenarian spread his call for justice across the globe in several books, speaking tours through Canada and the U.K., as well as newer modes of communication like social media and podcasting. His books included "Don't Let My Past Be Your Future: A Call to Arms" and "Harry's Last Stand: How the World My Generation Built is Falling Down."

John Smith said the elderly social justice warrior's polemics gained particular resonance among many millennials, who heralded him as a member of the greatest generation that built the welfare state, only to have those social safety nets eroded by the baby boomers that followed.

"What he always told (millennials) was, 'You will be the greatest generation for the 21st century, because you will be the people that raise the boats for everyone,'" Smith said.

Last year, Smith launched a crowdfunding campaign to finance his travels to refugee hotspots to put a spotlight on their plight.

John Smith said his father was inspired by how the Allied forces came together to ensure those displaced by the Second World War were clothed, fed and sheltered, and hoped that nations would once again band together to solve the current refugee crisis.

"What is remarkable with Harry is that he really dedicated his last energy to flag the risk of again turning our backs on refugees," Beuze said in a phone interview Wednesday.

"He had the perspective of history to warn us about not making the mistakes that humanity did before."