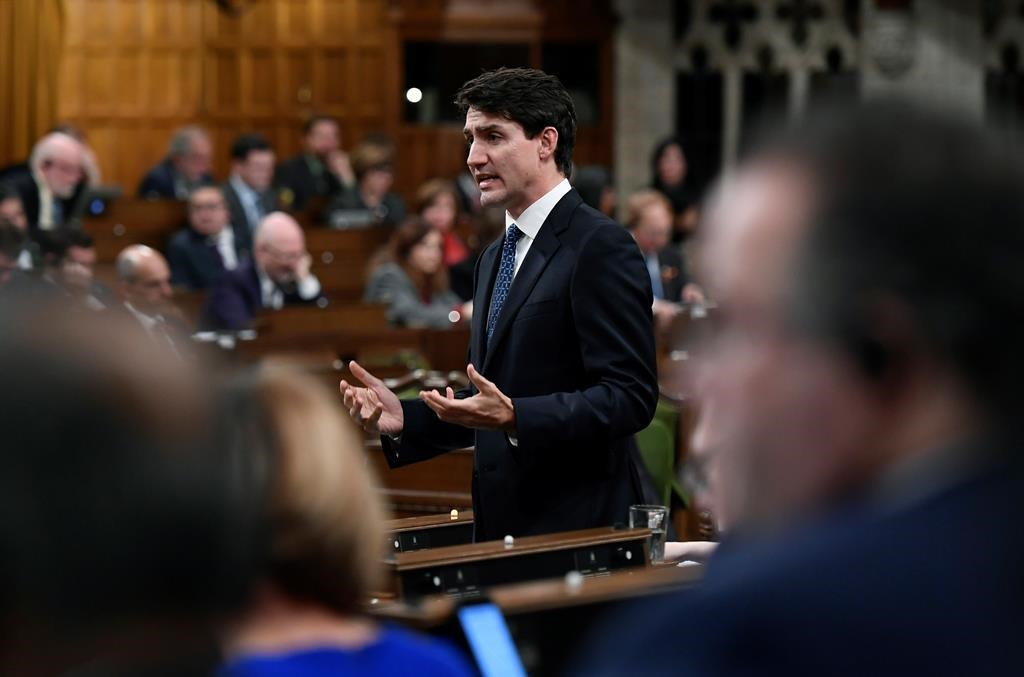 Prime Minister Justin Trudeau rises during Question Period in the House of Commons on Parliament Hill in Ottawa on Monday, Nov. 26, 2018. Photo by The Canadian Press/Justin Tang
Previous story
Next story

Prime Minister Justin Trudeau and his counterparts from the four other main federal parties left a supposedly non-partisan meeting on how to help Canadian francophones divided and without a plan to save a French-language university in Ontario.

The mood after the Parliament Hill meeting was that it was largely symbolic — a show of support for francophones outside Quebec.

But did anything new come out of it?

Franco-Ontarians reacted to the Ontario government's planned cuts with a fury that spread to Quebec: the city halls in Montreal and Quebec City raised the Franco-Ontarian flag and the immensely popular Tout le monde en parle current-affairs television show devoted an episode to the issue. A backbench Tory legislator for a heavily francophone riding in Eastern Ontario broke ranks and criticized her government's moves.

Premier Doug Ford rapidly backtracked on a plan to abolish the independent office of the French-language services commissioner; the position was restored, though it's to move under the supervision of the province's ombudsman.

And after having demoted francophone affairs from a distinct ministry to a mere area of responsibility for Attorney General Caroline Mulroney upon winning power, Ford gave it back its cabinet status on Tuesday.

The French-language university campus in Toronto that the previous Liberal government had planned, however, is still off because Ontario can't afford it, Ford said.

Francophones in New Brunswick are also concerned because the party playing kingmaker in the minority legislature there campaigned on loosening or eliminating bilingualism policies in the province.

The Liberals say they're open to financing the construction of the university, but Official Languages Minister Melanie Joly, who is from Montreal, said the Ford government has to make a request to unlock federal funding. She also turned on Scheer, saying he has to speak up more about the francophone community in Ontario.

"Whether Mr. Scheer will go and say as clearly as we would like him to do, is up to him," she said.

NDP Leader Jagmeet Singh — who doesn't have a federal seat but formerly represented a suburban-Toronto riding in the Ontario legislature — expressed disappointment the Liberals didn't agree to table their own financing proposal for the university project: "We actually need to propose something concrete to put more pressure on the provincial government," he said.

May said there is only so much the federal government can do without the province's support because education is an area of provincial jurisdiction.

Scheer didn't speak to reporters after the meeting.

Conservatives had accused the Liberals of politicizing an issue that has nothing to do with Scheer, aiming to link Scheer to Ford and sour francophone voters on the Conservatives in next year's federal election.

Conservative MPs on Wednesday morning said Ford's policies in Ontario are not those of their federal party.

Gerard Deltell, a top Quebec Tory, said Scheer's Conservatives want to find a way to save Ontario's French-university plan, including with federal dollars or support from some existing program.

"We are not in the case now to pointing out who is responsible for what. We are raising the issue of solutions without any partisanship," he said. "We all know this is a partisan debate ... We all recognize that, but now it's time to move on and that's exactly what the prime minister said when he accepted our proposition."

The Liberals have promised to create a free, online French-language learning portal, but the project continues to have challenges, according to the government's mandate tracker.

Federal support for official-language learning, be it English or French, is focused on training for young students and newcomers. The proposed e-learning portal, including a free mobile app, would be available to all Canadians, but the government wants to target adults no longer in school. The hope is to attract between 400,000 and two million users a year.

Federal officials have been looking at how to create the portal since 2016, when the first documents for interested bidders were posted. The project has a five-year budget totalling $16.5 million.

Then over the summer, the Liberals went back to interested bidders for more feedback. A tender document is supposed to be released early next month.