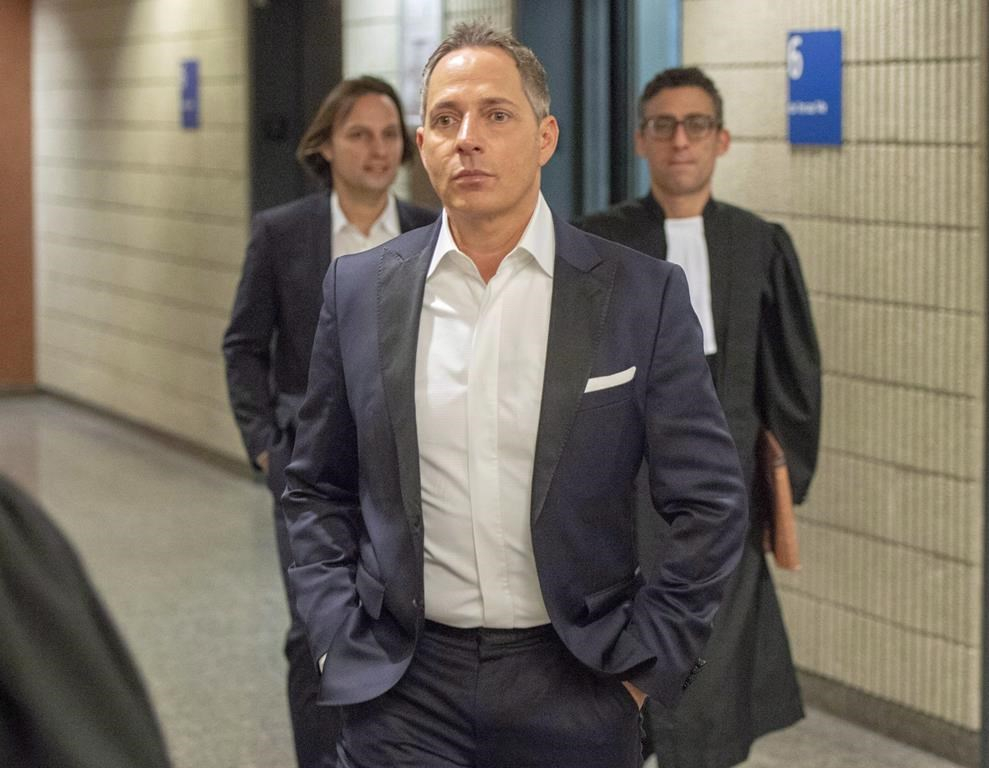 Yanai Elbaz, front, and his brother Yohann Elbaz, left, arrive for their fraud trial at the courthouse in relation to the MUHC hospital on Monday, November 26, 2018 in Montreal. File photo by The Canadian Press/Ryan Remiorz
Previous story
Next story

Montreal's English-language superhospital was the victim of the greatest corruption fraud in Canadian history, and one of the key players shouldn't benefit from the millions of dollars he has in the bank, the lawyer for the health centre said Wednesday.

Alexander De Zordo, lawyer for the McGill University Health Centre, asked Superior Court Justice Claude Leblond to award the $6-million frozen in Yanai Elbaz's bank account to the hospital to cover a portion of its losses.

Elbaz pleaded guilty Monday to accepting a $10-million bribe in return for helping engineering firm SNC-Lavalin win the contract to build what was to be a jewel of the anglophone community.

The Crown and defence made a joint suggestion to Leblond that Elbaz serve 39 months in prison, but they did not agree on whether he should pay compensation.

Before ruling on a sentence, Leblond must decide whether the hospital's losses are easily quantifiable or whether a civil trial is needed to sort it all out — a process that could take years and more public money to settle.

The massive hospital complex is operating in west-end Montreal, but its construction became a symbol of the corruption that plagued Quebec's construction industry.

De Zordo filed in court transcripts from Quebec's Charbonneau inquiry into corruption, in which an investigator discussed the probe into the MUHC.

Officer Jean-Frederick Gagnon told the inquiry in 2014 that operation Laureat was an investigation into "the biggest corruption fraud in Canadian history."

In an agreed statement of facts tied to Elbaz's plea, the former MUHC manager admitted to giving privileged information to SNC-Lavalin to help its submission for the contract. Elbaz also admitted to denigrating SNC's competitors in front of the hospital's selection committee.

Elbaz and Arthur Porter, the ex-CEO of the MUHC who died a fugitive in Panamanian custody in 2015, received a total of $22.5 million to rig the bidding process to favour SNC-Lavalin, the statement of facts said.

Porter created a shell company that received the $22.5 million from the engineering firm. Elbaz then created his own shell company and received his share of the cash.

Elbaz admitted that all the money in the shell companies was proceeds of crime.

Porter died in Panamanian custody in 2015 after his wife pleaded guilty and was sentenced to 33 months on two counts of laundering the proceeds of crime. She was released in June 2015.

Ben Aissa pleaded guilty to a reduced charge of using false documents and was sentenced in July to 51 months in prison.

De Zordo said in court Wednesday that while the contract to build the hospital complex was $1.3 billion, it actually totalled close to $4.6 billion when costs of managing the public-private partnership were factored in.

He suggested the MUHC contract was inflated by up 20 per cent, meaning the health care centre is owed as much as $934 million.

Acknowledging that seeking that much from Elbaz is unrealistic, he suggested the hospital should receive at least what is in the frozen bank account.

"(Elbaz) was paid handsomely to oversee a fair and equitable process — but it was rigged," said De Zordo. "He received $10 million and the (McGill health centre) is asking for some sense of restitution. It's virtually impossible that the MUHC as victim has suffered no prejudice."

Leblond said, however, that just because Elbaz admitted to taking money, it doesn't mean the hospital automatically suffered any damages.

"The amount you need to quantify is the prejudice (the MUHC) suffered," Leblond said, "not the $10 million."

The case returns to court Dec. 17. Elbaz has been detained since pleading guilty Monday.