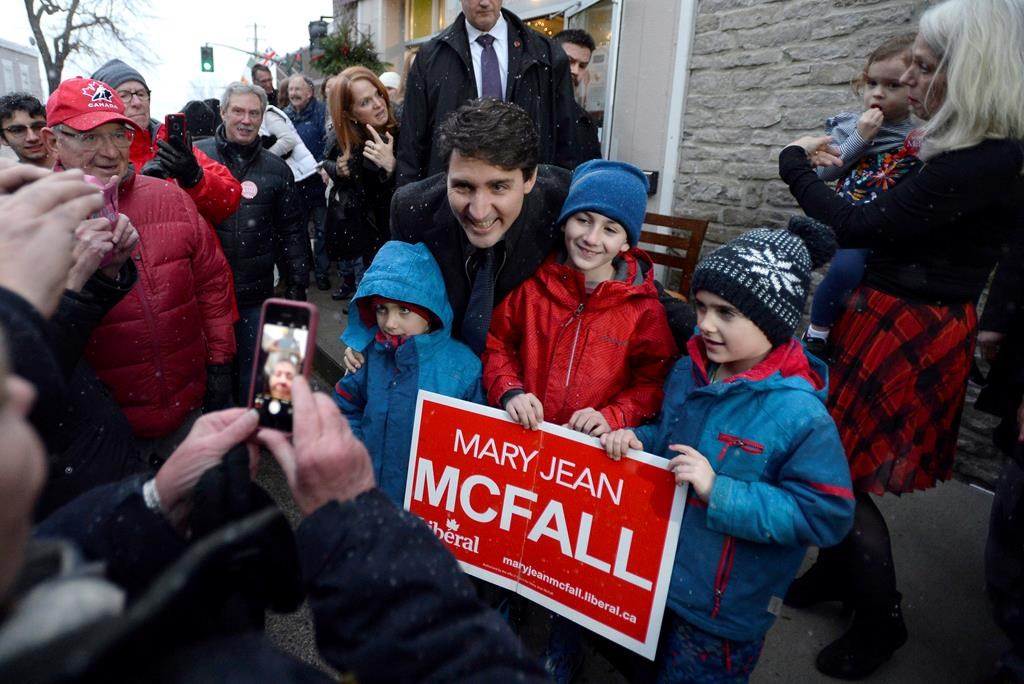 Prime Minister Justin Trudeau poses for a photo with supporters as he campaigns with Mary Jean McFall, right, Liberal candidate for Leeds Grenville Thousand Islands and Rideau Lakes, in Brockville, Ont., on Nov. 27, 2018. File photo by The Canadian Press
Previous story
Next story

The Conservatives easily hung onto a long-time Tory fiefdom Monday, scoring a convincing victory in a federal byelection held in eastern Ontario.

With all polls reporting in Leeds-Grenville-Thousand Islands and Rideau Lakes, Conservative candidate Michael Barrett, a municipal councillor, had racked up 57.8 per cent of the vote.

Liberal contender Mary Jean McFall was second with 35.8 per cent, while the NDP trailed with with three per cent — just 24 votes ahead of the Greens.

The riding became vacant when Conservative MP Gord Brown died in May. He had been the MP since 2004.

Some 35 per cent of eligible voters cast ballots in the byelection.

But since the reuniting of conservative forces in 2004, the Conservatives have been pretty much invincible in the riding.

Brown took more than 50 per cent of the votes in four elections, peaking at almost 61 per cent in 2011.

His fifth and last election, in 2015, was his closest, with Liberal McFall nipping at his heels. Brown captured 47.4 per cent of the vote to McFall's 40.6 per cent.

On Monday, Barrett managed to increase the Conservatives' share of the vote by 10 percentage points while McFall's share dropped by five points.

For the NDP, Monday's results were particularly grim. The party's share of the vote plunged to less than half the 8.3 per cent it garnered in 2015, which was already a disappointing drop from 2011 when the NDP managed to finish second, ahead of the Liberals.

New Democrats are hoping the party's slumping fortunes will turn around once Leader Jagmeet Singh wins a seat in the House of Commons. He'll get his chance in early February, when byelections are expected to be held in three more vacant ridings — the British Columbia riding of Burnaby South, where Singh intends to run, the Montreal riding of Outremont and the Ontario riding of York-Simcoe.

Prime Minister Justin Trudeau is poised to call those three byelection early next month and may yet add a fourth, B.C.'s Nanaimo-Ladysmith, where NDP MP Sheila Malcolmson is making a leap to provincial politics. She has announced her intention to resign once a by-election is officially called in the provincial riding of Nanaimo, expected by early January.

However, should Malcolmson not quit her federal seat until late January, Nanaimo-Ladysmith could wind up without an MP until the general election set for Oct. 21.

Under Bill C-76, which the government hopes will be passed by the end of this year, the prime minister would be prohibited from calling a byelection within nine months of the day fixed for a general election, making Jan. 20 the last day byelections could be called.

For that reason, the Montreal riding of Saint-Leonard—Saint-Michel is likely to be without representation until next October. Liberal MP Nicola Di Iorio has said he intends to hand in his resignation on Jan. 22.

The Ontario riding of Brampton East could also be left without representation, depending on what Raj Grewal decides to do. The MP, who was bounced from the Liberal caucus last week amid revelations that he was under police investigation after racking up enormous gambling debts, had announced late last month that he was resigning his seat.

He has since changed his mind and now says he'll take a leave of absence over the holiday season and decide in the new year whether to continue as an MP.