Leaders of Unist'ot'en Community were protecting their territory. TransCanada took them to court 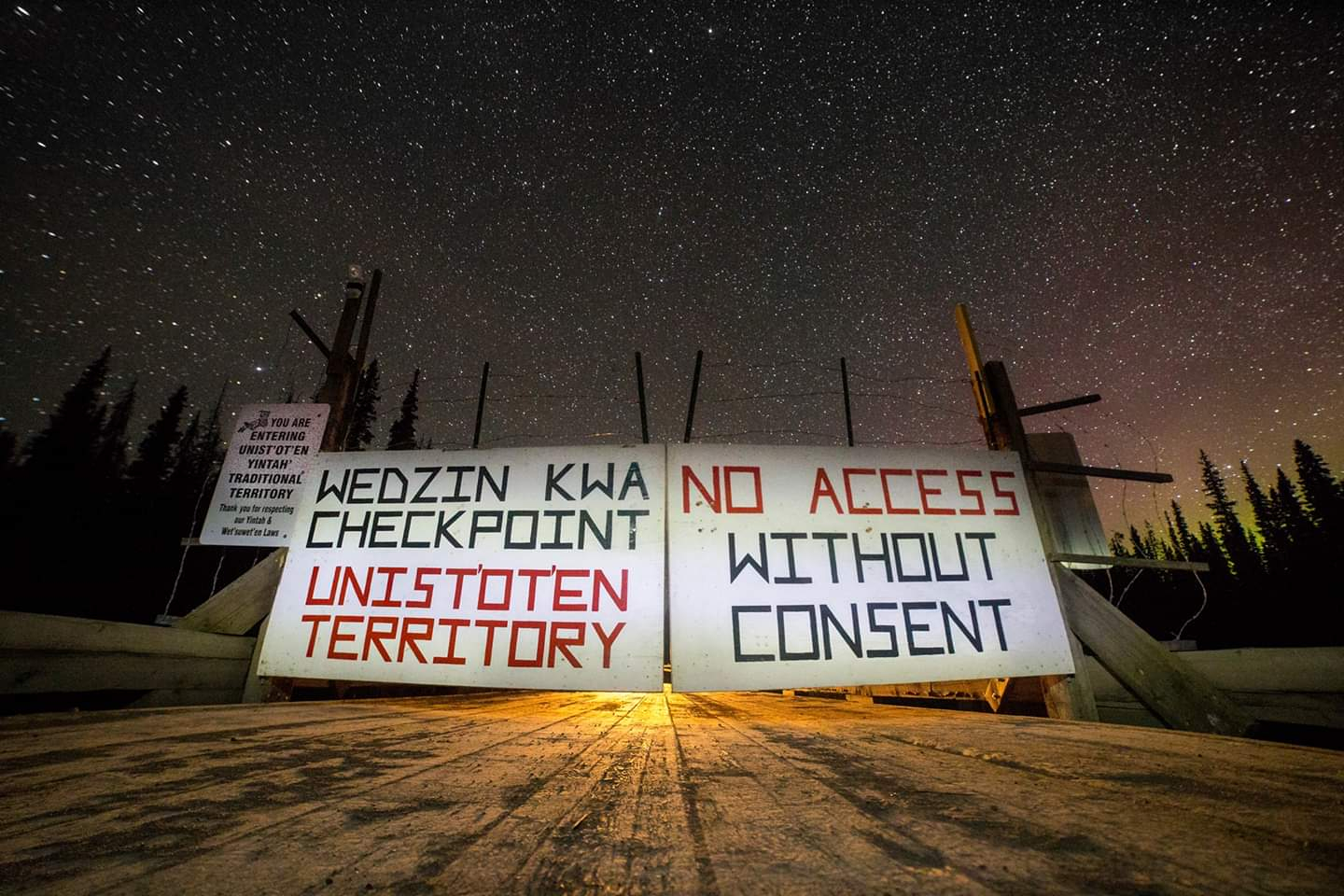 Visitors to Unist'ot'en territory are greeted with a sign ensuring there's no confusion around their recognized governance. Photo by Jeffrey Nicholls
Previous story
Next story

A subsidiary of Calgary-based energy company TransCanada has taken leaders of the Unist'ot'en community to court, accusing the members of the Wet'suwet'en First Nation of blocking access to the area around the Morice River Bridge.

The company is now trying to build a natural gas pipeline in this region. But it says it is being obstructed by a camp set up by Unist'ot'en clan members and other members of the Wet'suwet'en First Nation to protect their traditional territories, located south of Houston, B.C., a mining, forestry and tourism town in the northern interior part of the province.

The notice of civil claim filed by Coastal GasLink to the Supreme Court of British Columbia names Freda Huson (spokesperson for her clan, the Unist’ot’en House) and Dinï ze’ Smogelgem (Hereditary Chief of the Laksamshu Clan), also known as Warner Naziel as defendants.

"The two notices — the notice of application and the civil claim, both name Freda and myself as individuals," explained Naziel over the phone. Naziel was brought into the Unist'ot'en resistance as bikiy wa'at'en (the responsibility of the husband) to help with logistics to living on the land. He has been upholding his responsibilities in this regard for 10 years. "They don’t recognize we’re connected from the hereditary system. They decided to try and make this personal, attack us as individuals, rather than our collective nation."

The notice of civil claim was served to Huson and Naziel while they were at Naziel's mother's house. They were attending to Naziel's sick mother at the time, as they continue to do, while suddenly faced with trying to deal with the legal actions. Naziel and Huson, based on past experiences, believe the company chose to serve the injunction in difficult times.

"They chose the injunction while I'm doing palliative care with my mom," Naziel said. "It's advantageous for them to jump on us while we're struggling. This isn't the first time — they sent surveyors with helicopters while Freda's dad passed and Enbridge tried to cross during her brother's passing."

Due to the circumstances, Naziel and Huson requested an extension for response to the injunction. But they were informed on Tuesday that TransCanada denied the request.

TransCanada is also the company behind the proposed Keystone XL oil pipeline that, if built, would link Alberta oilsands producers to refineries and export markets on the Gulf coast of Texas. This project has recently stalled following a federal court order in November that was triggered by legal action by Indigenous and environmental groups in the United States.

TransCanada applied for an injunction and a civil lawsuit against Unist'ot'en Camp. They're seeking an injunction & damages for "occupying, obstructing, blocking, physically impeding or delaying access" to our own unceded territory. Statement: https://t.co/S8FXB2SaiM #nopipelines pic.twitter.com/LnR8TwRjqg

'We live our laws every day'

The B.C. Ministry of Energy, Mines and Petroleum said in an email that they are aware that Coastal GasLink filed for an injunction and they acknowledge the challenging situation.

"We hope a respectful resolution can be achieved," wrote Minister Michelle Mungall. "We will assist in re-engagement efforts and we are looking to the company to find a resolution to the access issue. For our part, the province recognizes the need to reset the relationship with the Wet’suwet’en Nation, including hereditary leadership. Our reconciliation commitment isn’t connected to any one project and is grounded in rights recognition."

B.C. and Canada approved TransCanada's Coastal Gaslink fracked gas pipeline on Oct. 2, 2018. While Coastal GasLink has negotiated agreements with the elected councils of all 20 First Nations on the route, the Wet'suwet'en hereditary chieftainship says they are the only authority that can legally sanction development in their territories.

"We are the jurisdiction in our land," Dinï ze’ Na’Moks (hereditary chief John Ridsdale) told National Observer over the phone. "We never signed a treaty with Canada. As hereditary chiefs, we are unified, and our answer has always been — no pipelines."

The notice of civil claim is just the latest in a long history of the Wet'suwet'en people practicing, asserting and defending their traditional territories, culture and governance system.

In 1997, the Wet'suwet'en celebrated a victory in the Supreme Court of Canada in a groundbreaking case known as 'Delgamuukw v. British Columbia.' The court affirmed that the Wet'suwet'en have never ceded or surrendered their title to 22,000 square kilometers of land in northern B.C. In the decision, the courts recognized the hereditary chiefs as the rightful decision-makers on their lands.

While the recognition of traditional governance on land never ceded, sold or surrendered may have been news to Canadians, it was a well known fact upheld by the Wet'suwet'en people.

"We live our laws everyday," Ridsdale, hereditary chief of the Tsayu clan said. "That's why we have 22,000 square kilometers of unceded territory. We have custodian on the territory, according to our laws and our ways. We have always stuck to our hereditary system of governance."

One of the main differences between Canadian law, and the way it negotiates extractive projects, the economy and the benefit of its members, from the way that the Wet'suwet'en system of governance represents relationships in their traditional territories, has to do with money, the chief said.

"We don't put a monetary value on our land, culture, future," Ridsdale said. "We don't want anything more than what we have, but we want to keep what we have. What we have will last, if we look after our land, as hereditary chiefs."

Hereditary chiefs are obliged to care for their territories, he said. Chiefs are custodians with great responsibilities, put into position through consensus of the clan members. All of the names chiefs are given in their traditional feast system, come from the lands, air, water, animals, he said. These names, coveted and preserved over many generations, are older than Canada has been a country.

"When we receive a chief name, those names come with a blanket and those blankets represent our territories," Naziel said. "Our people say — don't dirty your blanket. If you don't uphold your names, you could be stripped of those names and the entire family shamed."

It's a huge responsibility to protect the names, the chief explained, as well as those territories they represent.

'None of these people have signed anything'

Senior Communications Specialist for Coastal GasLink, Jacquelynn Benson said the proponent felt that filing the application for the injunction order was necessary to access roads needed to begin construction activities. She said the injunction was the last resort.

"We have been initiating consultation with local communities, including elected chiefs and councils and hereditary chiefs, since June of 2012," Benson said over the phone. "A lot of that engagement has led to hereditary chiefs and First Nations groups participating in our field studies and committees to provide feedback on planning of the project."

Benson said the company does have hereditary support, though she was not able to name any names or explain agreements made through respecting traditional Wet'suwet'en governance. Naziel and Huson said that the company's comments were false.

"We have five hereditary chiefs," Huson said, taking the phone during the joint interview with her and her partner. "Four of our hereditary chiefs showed up to the Unist'ot'en camp last week in a show of solidarity. None of those people have signed anything with the government. If they're saying they have hereditary leadership, they might be talking about people posing as chiefs."

Huson said her people know who is who. The document citing the groundbreaking Delgamuukw case is available online, she said, naming 13 house groups. Nowhere in the document does it name elected band councils, she said, and nowhere have hereditary chiefs given away their rights and responsibilities to any other entities. In Wet'suwet'en governance, hereditary chiefs receive names through a feast and show of support.

"We had two feasts to tell our nations the reasons why we oppose these projects," Huson said. "The other chiefs stood up and supported our decision. That's our governance structure."

Huson said they aren't trying to kick the municipalities out, but are trying to work with them.

"What little we have, where we can still hunt, harvest, fish and trap, is threatened by these projects," Huson said.

Programs for a traditional healing center on their territories began in 2015. The pair said the center is one of many initiatives that would be further threatened by extractive industry. The healing center, constructed entirely from donated materials and voluntary time, offers clients a way back to their culture, land and wellbeing, Naziel and Huson explained.

"There's a young couple there escaping alcoholism," Naziel said. "They're learning to trap, hunt, and all the basics of living off the land. We pulled another guy off the streets of downtown east Van, and now he's in the process of healing. He was skin and bones when he came off the streets, now he's out on the territory, putting on weight and so happy."

Naziel and Huson are passionate about land-based healing. This isn't a new process, Naziel said. They have stories of people, like David Aleck, who came home from WWII with a lot of trauma from his time as a sniper. First thing he did is get back out on the territory, Naziel explained. He got out on the land, lived there for a year.

"We're doing the same thing, allowing our people to use the territory to heal," Naziel said. "We can't facilitate healing if somebody is coming to destroy that land. Corporations created the whole system that oppress our people. We know fracking is the worst cause for climate change. They're telling the rest of the world that LNG is cleaner and natural, but if they go through, they're going to triple their ability to frack, and that impacts the whole world."

When the government claims LNG is a cleaner energy source, they're wrong, Naziel and Huson stressed.

"They're using more carbon than they're saying they're replacing. The last reservoirs of LNG will run dry by 2020, so what's left? They're going to try and replace LNG (liquified natural gas) with LFG (liquified fracked gas), one of the most destructive processes they have for oil and gas around the world," Naziel said. "I trust in the public's intellectual ability to put an end to this."

Since the injunction, 65 organizations and over 1,500 individuals have pledged their support for the Unitst'ot'en community, "demanding that Coastal GasLink, the RCMP, and Federal and Provincial governments take no actions in violation of Wet'suwet'en collective Title and the United Nations Declaration on the Rights of Indigenous Peoples." The injunction hearing will take place on Monday, Dec. 10, International Human Rights Day.

People in the area who

People in the area who opposed the pipeline are afraid that in the long term (when all the gas from fracking has been exploited), the natural gas pipeline, which has a gage that would allow it to carry crude oil, might revive the Northern Gateway project. That was the case with Energy East, an old pipeline that is carrying natural gas to eastern Canada. Some politicians are also trying to revive that project.