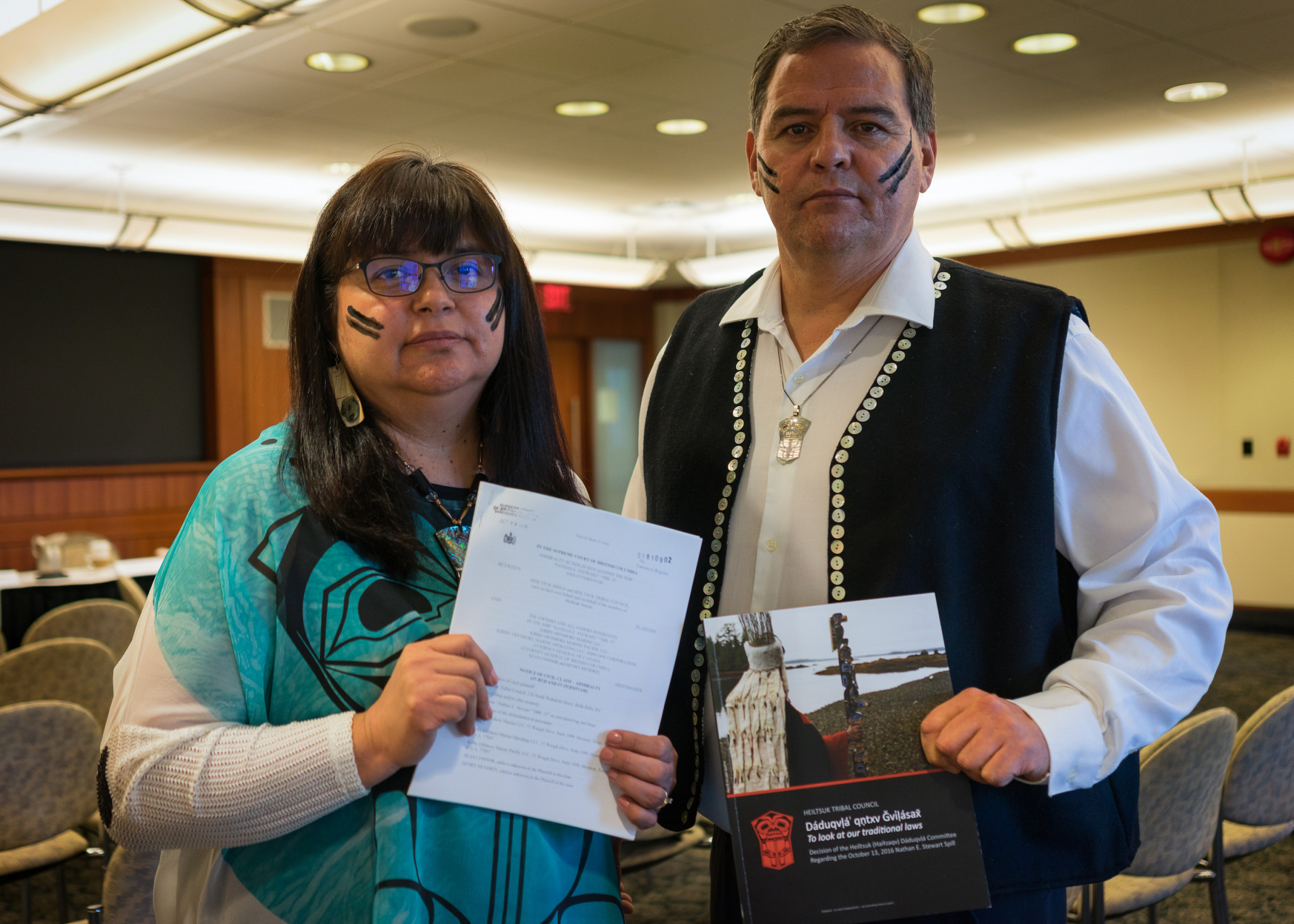 It was a calm and peaceful night off the coast of northern British Columbia when disaster struck two years ago. The second mate of the U.S-owned tugboat Nathan E. Stewart was alone on the bridge and fell asleep.

Moments later, the tug and associated barge ran aground in the Gale Pass of traditional Heiltsuk territory, spilling 110,000 litres of diesel fuel, lubricants, heavy oils and pollutants into the water, contaminating an important Heiltsuk food harvesting, village and cultural site.

After two years of dealing with the disaster, establishing solutions, conducting their own research, investigative report and assessment of the event, the nation is taking the matter to the B.C. Supreme Court, filing a claim against the federal and provincial governments, as well as the Kirby Corporation, which operated the ship.

"Loss of employment, culture and trust"

The lawsuit alleges that government agencies and the operator were too slow to respond to the emergency, failing to address the impacts on the health and safety of the Heiltsuk people and their way of life.

"This case is about loss," said elected chief councilor Marilyn Slett at a press conference Wednesday morning in Vancouver to announce details of their case. "Loss of employment, loss of culture, and loss of trust. With this legal action, we are seeking compensation for cultural and financial losses associated with harvesting and cultural disruptions and the cost of environmental testing."

Chief Slett said the civil claim is asking the court to clarify four issues — Canada and B.C.'s duty to consult communities affected by spills, the Aboriginal title rights on the seabed and foreshore, the limitations of federal legislation regarding marine liability and a federal fund used to pay for the cost of clean ups of pollution from ships, and whether it's possible to place a monetary value on cultural loss.

The first point relates to the government's constitutional duty to consult First Nations on decisions that could affect their rights and way of life.

Since the spill that devastated an important clam garden used for Heiltsuk ceremonial, traditional and commercial use, harvesting for any purpose has been suspended. Slett said the nation made several requests to guide the Environmental Impact Assessment of the spill and how the assessment was conducted. She said the provincial and federal governments failed to acknowledge their duty to consult the self-governing nation as the guardian of the affected territory most impacted by the disruption. Faced with little to no resources, adequate response and engagement with government agencies, the community continued to take matters into their own hands.

"We're here to stand up and fulfill our responsibility as the Indigenous place-based people of this coast. To say this has to stop and we have to do better," said Heiltsuk hereditary chief Frank Brown during Wednesday's legal action announcement.

These efforts, including the considerable financial and administrative burden of traditional and scientific testing, and the commercial, cultural and ceremonial losses due to the spill continue to drain the Nation of millions of dollars. As a result, they seek compensation as a part of the lawsuit.

Transport Canada senior communications advisor Annie Joannette said in an email response that "through the Oceans Protection Plan, the government is working with Indigenous peoples to enhance Canada’s strong marine safety system." The Heiltsuk Nation has recently criticized the Oceans Protection Plan, saying the federal government failed to adequately consult Indigenous communities and collaborate with them in its development.

"The department conducted an investigation of the Nathan E Stewart incident and recommended charges for contraventions to the Canada Shipping Act, 2001 and the Pilotage Act to the Public Prosecution Service of Canada, which is responsible for prosecuting offences under federal jurisdiction," wrote Joannette. "We take all reports of non-compliance very seriously and remain committed to improving marine oil spill preparedness and response in Canada through many initiatives under our new Oceans Protection Plan."

The Heiltsuk Nation seeks compensation for the considerable financial and administrative burden of essential traditional and scientific testing of the scope and impact of the spill. While Slett said the nation is in the process of determining an exact number, she said amounts associated to the claim would be significant.

The civil claim is also asking the court to clarify whether Aboriginal title, a legal term that is used to describe the inherent Indigenous right to land or territory, also applies to the seabed and foreshore, the part of a shore between the water and developed land.

The scope of Aboriginal water rights

"This has never been decided by Canadian courts," Slett said. "While land claims have been considered by many cases in Canada, few directly consider the existence or scope of Aboriginal water rights."

While Canada claims to own the seabed and the province claims ownership of the foreshore, Slett said their nation occupied the ocean and foreshore long before contact and have never ceded, surrendered or sold their title. Answering this question in court will help determine what legal rights Heiltsuk have to the seabed and foreshore, which they hope will clarify their rights to consultation and management.

Thirdly, the case is testing the limits of the Federal Marine Liability Act and the Ship Source Oil Pollution Fund.

In dealing with the aftermath of the spill, the Heiltsuk Nation got in-depth knowledge about the Marine Liability Act and Shop Source Pollution Fund, in attempts to claim damages in the wake of a spill. While commercial losses can be recognized and compensated, Slett said, the scope of the act and fund do not compensate for the loss of food harvesting resources or cultural losses essential to the Heiltsuk's way of life.

Lastly, the nation has asked the court to determine whether it is even possible to estimate the damage the incident caused to their culture.

"Our people have expressed [that] our culture is priceless," Chief Slett said. "Our songs, our ceremony, and our way of life have provided for us since time immemorial. We have struggled with the concept of quantification."

Hereditary Chief Harvey Humchitt said as a hereditary leader, one of his roles and responsibilities is to protect the Heiltsuk peoples' territories, land and waters from harm. It was this obligation that brought him to the frontlines of the Nathan E. Stewart response when the tug ran aground.

"When we responded to the spill, we weren't properly informed about how serious the incident was," Chief Humchitt said. "We were given the wrong location and when we arrived, we were not given any resources. When materials and crew arrived, they were ill-equipped and disorganized."

Humchitt said there was little to no communication with the community, no clear direction or on-scene command and no sufficient action taken to mitigate the severe situation. In the Tribal Council's independent investigation into events before, during and after the spill, Humchitt said their findings were quite different from what the government found.

The report identifies crucial concerns around the way the Nathan E. Stewart was being operated, flawed policies and regulations common to other visiting vessels, he said, adding that the Heiltsuk people paid the price for these massive policy gaps.

A committee was established to review the report and determine whether Heiltsuk traditional laws, Ǧviḷás, were breached in the disturbing event. The committee determined that, without a doubt, their Ǧviḷás were breached by the Kirby Corporation and the federal and provincial governments.

Hereditary chief λáλíyasila Frank Brown was the co-chairperson for the Heiltsuk adjudication committee. At the press conference Wednesday morning, he said one of the many strengths of the Heiltsuk people has been their resilience, and ability to adapt to change and make the best of what the dominant society has to offer.

"After the spill, Heiltsuk determined that for justice to be achieved, we needed to draw from all the legal tools at our disposal," Chief Brown said. "Heiltsuk convened the Dáduqvḷá Committee to apply our own legal order, our Ǧviḷás - our laws, as well as to file a civil claim within the external court of Canada. This civil claim builds on the findings of this adjudication report."

The committee consists of a knowledge-keeper, two hereditary chiefs, an urban representative and communications advisor, as well as a youth representative. Chairperson Yilistis Pauline Waterfall, Co-chairperson Yím̓ás λáλíyasila Frank Brown, Yím̓ás Q̓a̓ít Arnold Humchitt, Lanemraeit Bessie Brown and H̓áziɫba Saul Brown worked closely with community elders to review the Investigation Report through a Heiltsuk lens and to provide a pathway for non-Heiltsuk people to engage with the findings.

The 68-page adjudication report, rich in Heiltsuk culture, geography and history, identifies the spill as an assault on Heiltsuk antiquity. It outlines Heiltsuk jurisdiction as one of the most complex maritime Indigenous societies in the world.

"Prior to the arrival of settlers in Heiltsuk territory, the Heiltsuk Nation held and developed sophisticated laws to govern our territories, manage our relationships, organize behaviour and resolve conflicts," Brown said. "These laws are known as a Ǧviḷás and they have been passed down over approx. 700 generations, according to carbon dating that has occurred within our Heiltsuk territory."

Brown said that the Heiltsuk Tribal Council’s decision to undertake an independent review of the circumstances of the spill and to direct an adjudication in accordance with their traditional laws was done as an exercise in self governance and authority within their territories.

The report identifies the ways Heiltsuk legal systems were attacked and undermined and the ways in which the Nation resisted and protected their traditional teachings, ceremonies and systems of governance. Brown summarized the findings of the report during Wednesday morning's press conference, calling government and corporate negligence by the captain and crew another instance of cultural genocide in an era of so-called reconciliation.

"They demonstrated a disregard and disrespect for Heiltsuk ecological knowledge and maritime expertise and for Heiltsuk's traditional inherited responsibility to protect and sustain the waters and lands we inherited from the Creator," Brown said. "It felt like a repeat of colonization - an attack on who we are as Heiltsuk Indigenous people."

The legal action taken is the nation's attempt to hold the government and polluter accountable for their actions, Brown said, and to ensure that similar harm isn't caused to other coastal communities and all Canadians.

"Our expectation of our litigation is to stop the transportation of petroleum products putting Indigenous people, British Columbians and Canadians at risk," Brown said. "This has to stop. It’s careless and it’s not fair for us as a society to bear the risks for the benefit of elite petroleum corporations to pad their bottom lines."

When asked about why they chose to address ownership of aspects of the ocean in the civil claim, chief Brown referred back to a Heiltsuk story that informs the nation of their ancestral relationship to place and associated responsibilities.

"Everything we have and everything we are is derived to our relationship to place," he said.