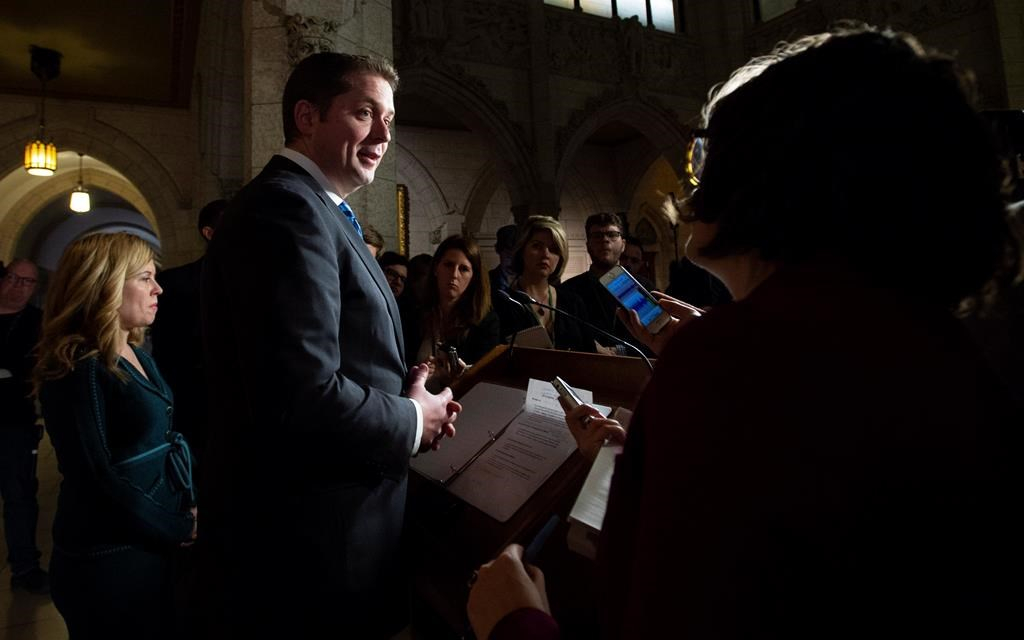 Leader of the Opposition Andrew Scheer speaks with the reporters as Conservative MP Michelle Rempel (left) looks on following Question Period in Ottawa, on Tuesday, December 4, 2018. Photo by The Canadian Press/Adrian Wyld
Previous story
Next story

As Canada prepares to sign on to a United Nations agreement on migration, Conservative politicians are pushing back, saying signing it would be tantamount to erasing Canada's borders.

But the Liberals say Conservatives are simply trying to court voters being fed conspiracy theories about the UN agreement fuelled by the far-right online media outlet Rebel Media.

The Global Compact on Migration is set to become the first, inter-governmentally negotiated agreement under the UN to cover all dimensions of international migration. It is aimed at improving co-operation between countries and will be signed by multiple countries next week in Morocco.

"Canadians and Canadians alone should make decisions on who comes into our country and under what circumstances," Scheer said Tuesday.

"Instead of signing international agreements that erode our sovereign right to manage our borders, the prime minister should focus on restoring order at home."

But Prime Minister Justin Trudeau accused Scheer of using "Rebel Media talking points" — a reference to the controversial website, which has been linked to far-right extremists.

In August 2017, Scheer announced he would no longer give interviews to Rebel Media, which had been heavily criticized for sympathetic coverage of white supremacists at a deadly protest in Charlottesville, Va., until it changed editorial direction. His criticism of the UN pact migration pact is similar to that espoused by Rebel Media, which has called the compact a means to normalize mass migration and silence media critics.

Concerns about the UN agreement have been raised several times in the House of Commons this week, with Conservative immigration critic Michelle Rempel calling it a "border-erasing policy" and People's Party Leader Maxime Bernier also saying it would "normalize mass migration."

Scheer, Rempel and Rebel Media have further raised concerns about the compact legally binding Canada to the provisions within the agreement — a claim the Liberals say is false.

"Scheer’s statement is factually incorrect: this Compact is a political declaration, not a legally binding treaty: it has no impact on our sovereignty," Alexander wrote on Twitter. "Canada has always been a champion & example of safe, orderly & regular migration."

Scheer’s statement is factually incorrect: this Compact is a political declaration, not a legally binding treaty: it has no impact on our sovereignty. Canada has always been a champion & example of safe, orderly & regular migration. https://t.co/wfk7VqAKJU

Consensus on the final version of the Global Compact on Migration was reached this summer in New York at the sixth round of negotiations on the proposed international policy document. Almost all UN member states are poised to sign it, except the United States and Hungary. Pope Francis is one of many dignitaries expected to be in Morocco for the signing event next week.

The agreement itself contains 23 objectives and commitments, each focusing on a different dimension of migration, from the moment a migrant decides to flee their country due to violence or persecution through to the time they return to their home country.

Canada played an active role driving the agreement forward, although the government has indicated it will closely review the text before formally signing the document, according to a senior official.

On Monday, Hussen said Canada will sign the agreement and on Tuesday, Trudeau defended the plan.

"Welcoming people through a rigorous immigration system from around the world is what has made Canada strong, and indeed something the world needs more of," Trudeau said.

However, the government has been flooded with form letters from Canadians asking that it delay signing the agreement until a national debate is held.

The letters, an example of which was provided to The Canadian Press, claim the UN agreement is attempting to eliminate criticism of the accommodation of migrants and would effectively "label those who complain as racists or haters, thus stifling any freedom of discussion."

Objective 17 of the agreement does ask countries to commit to eliminating discrimination, as well as to "promote independent, objective and quality reporting of media outlets, including internet-based information, including by sensitizing and educating media professionals on migration-related issues and terminology."

However, it also says commits signatories to protecting free speech, "recognizing that an open and free debate contributes to a comprehensive understanding of all aspects of migration."

The Liberals say they are proud of the leadership role Canada has played in this initiative, especially at a time when millions of people in the world have been displaced by wars and violence.

Mathieu Genest, Hussen's press secretary, said he believes Sheer's comments demonstrate the "lengths the Conservatives are willing to go to win over supporters of the People's Party of Canada," referencing the upstart party founded by former Tory Bernier.

"The Conservatives have been inconsistent on this file, and it is a shame to see them promote conspiracy theories to spread fear and division."

Canada to increase annual immigration admissions to 350,000 by 2021

This obsession with the

This obsession with the inviolability of "borders' among the far/alt right, white supremacist camp followers is an ugly holdover from the centuries of feudal dynastic wars, overlords, oppressive enslavement of peasants, capricious tyrannical laws, that accompanied man from the relative freedom of the hunter/gatherer economy to the economies of landownership, people ownnership, resource ownership.

We are still bedeviled with these concepts of "ownership" - codified into laws that are perpetually being tweeked to sustain oppression, class differentials and the permanent existance of the underclass who are mandated to supply the cheap labour. From the earliest days of settled civilization humankind has divided itself into free and slave, using pagan religion as justification for the enslavement and ritual sacrifice murders.

Now in the current era we are still using religion, class and cultural differentials to enact laws sustaining entitlement and disenfranchisement, and fear generated bigotry to justify mass incarceration and ritualized slaughter of innocent scapegoats - usually identifiable "others".

Progress? Not so much. The pressures that the laws of evolution exerted on man to ensure survival - have perhaps fatally warped our minds, our hormones, to self destructive, irrational fear. When it appears that we are threatened we instantly drop frontal lobe thinking and revert to the primordial fear driven flight or fight feedback loop. Do that enough and the mind completely stops operating on a rational level.

To this unenlightened, fear beset subset of humans, borders are supposed to protect them, their privileged lives, from the barbarian hordes. Everyone who is not like us must be kept at a distance or "disappeared".

The absurdity of this thinking in a world where truth and lies fly around it at the speed of light does not seem to have penetrated our consciousness very far - just far enough to trigger the ever greedy, acquisitive impulses of the few who consider themselves the new overlords - who are empowered anew, by new technologies, to manipulate and enslave humans yet once again. They believe that it is still effective to divide and conquer through the tired old media of lies, threats, and false fears.

Our resources would be better

Our resources would be better spent helping countries to take care of their own. We don't have the infrastructure.... ie health, homes, education, food etc for those already here. Now there is even representation from our seniors in the ranks of the homeless.

It is a shame people like Hussen and Trudeau resort to calling those of differing opinions racist and bigots. Very sad statement on the Liberal condition.