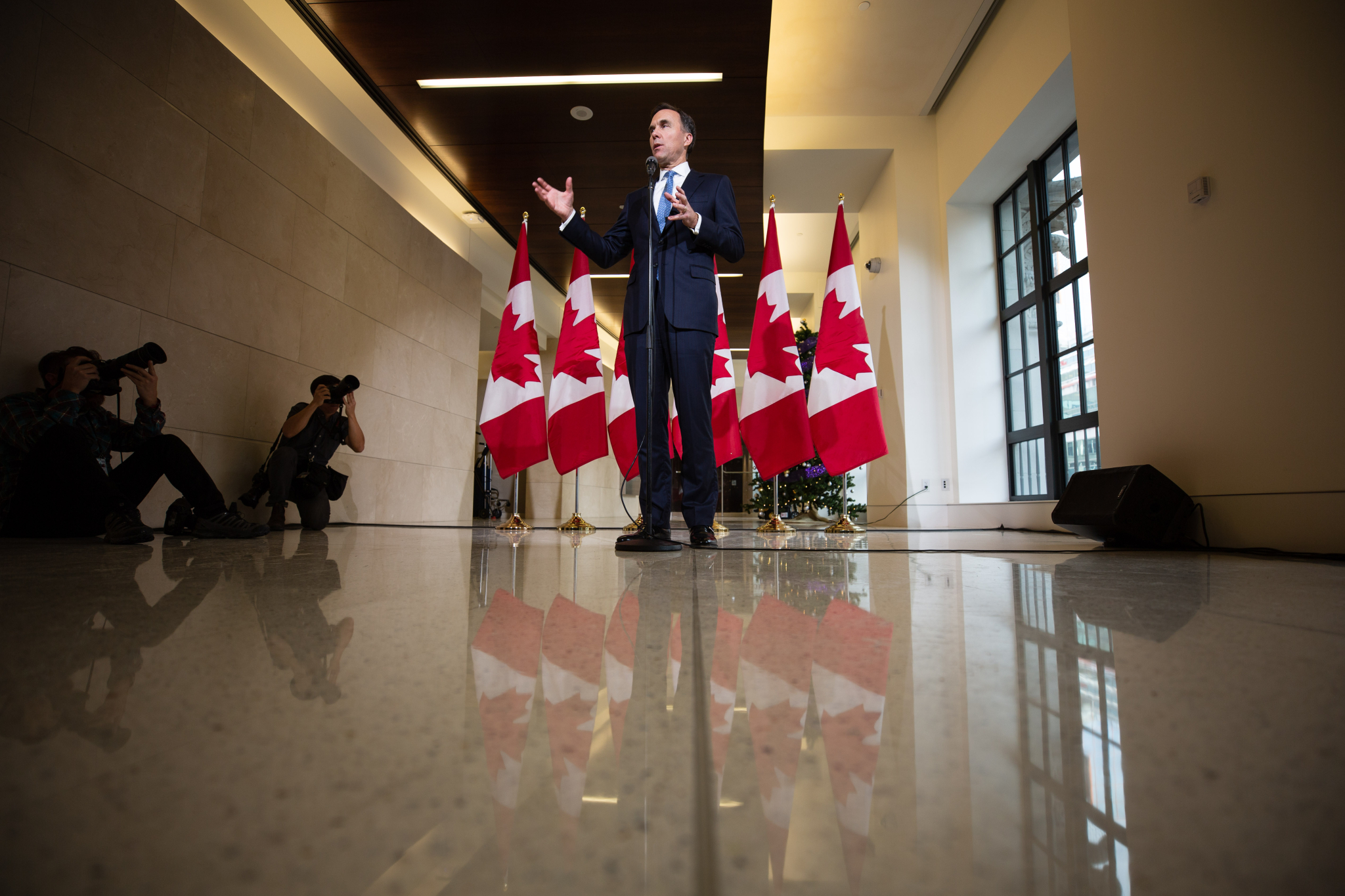 The Trans Mountain oil pipeline is costing a Canadian Crown corporation some staggering interest expenses that cast doubt on strong revenues from the infrastructure touted in the federal government's recent economic update.

The interest expenses were $20 million over a single month in September, right after Prime Minister Justin Trudeau's government purchased the pipeline and related assets from Texas energy company Kinder Morgan for $4.5 billion.

As part of the purchase, the government also had to set aside an additional $500 million as a security deposit in case of environmental damage, and this appears to be part of the interest expenses.

If the interest expenses continue to pile up at that rate over the year, they will come to represent a larger sum than the amount of money that the government has said the pipeline is on track to raise this year primarily from toll charges.

Oil pipelines earn revenues by charging tolls to companies that are shipping fuels on the infrastructure. The Trudeau government has said that the proposed Trans Mountain expansion project, if completed, would generate more revenues and could be sold back to the private sector, along with existing assets, as a profitable venture.

Kinder Morgan says it sold the Trans Mountain system due to uncertainty caused by political opposition to the expansion project in B.C. It reached this deal after it tried unsuccessfully to persuade its federal regulator to loosen rules requiring it to have $500 million in cash available to respond in case of a catastrophic spill.

Soon after this decision, the federal government wound up being forced to cover this security deposit since it was purchasing the pipeline.

Finance Canada does not consider the reported interest expenses to represent a loss to the government. They say that because another Crown corporation is managing the loans, the expenses simply show money moving between two government entities.

But the loans are ultimately backed by the government's main revenue fund, and analysts question whether the government is providing only a partial picture of its financing.

In a new quarterly report, the Canada Development Investment Corporation (CDEV), the Crown corporation that now owns and operates the pipeline through a network of subsidiaries, said it incurred $21.27 million in interest expenses related to Trans Mountain during the third quarter ending Sept. 30.

The pipeline from the oilpatch to the west coast and its related expansion project was acquired by Ottawa in a deal that cleared Aug. 31. These two dates represent approximately a month’s worth of expenses, or $255.24 million over the year.

That is well above the “over $200 million” that Finance Minister Bill Morneau’s fall fiscal update said the pipeline was on track to make in “earnings before interest, taxes, depreciation and amortization,” or EBITDA, a type of metric used in finance to show a performance snapshot. EBITDA doesn’t include things like capital investment costs or expenses linked to debt.

The interest expenses are connected with loans from the Canada Account, a federal fund that is managed by Export Development Canada (EDC), another Crown corporation. There are currently two products in the account linked with the pipeline, over a billion dollars each. One is through an agreement with Royal Bank of Canada and Toronto-Dominion Bank.

Canada Account transactions are considered to be in Canada's national interest, which is how the Trudeau government has described Trans Mountain. The government, which ordered EDC to help finance the Trans Mountain purchase, assumes the risks on Canada Account loans. It does so by providing funding for any transaction out of the Consolidated Revenue Fund, the main national account where taxes and revenue are deposited.

In light of the new figures from CDEV, Morneau’s fiscal update is misleading, argued economist Robyn Allan, a former chief executive officer of the Insurance Corporation of British Columbia.

“This is designed to not address the issue, and suggests that there is no expectation that the interest charges in full or the principal repayment will be made,” said Allan. “Given what Canadians were told, anything short of full recovery on a commercial basis is a subsidy.”

Tom Sanzillo, director of finance at the Institute for Energy Economics and Financial Analysis, co-authored a report in June with Kathy Hipple, a financial analyst at the institute and corporate finance lecturer at Bard College, stating that the Canadian government was facing at least $11.6 billion in costs to complete the pipeline.

“This transaction and the cost of further planning and construction could add a $6.5 billion unplanned expenditure to Canada’s budget during FY 2019,” the report states, boosting Canada’s projected deficit by 36 per cent.

Sanzillo told National Observer that while it is not uncommon for a government economic development transaction to keep revenues, capital costs and operational expenses separate, the interest expenses and fiscal update numbers represent an incomplete picture.

“For a project of this size and importance,” said Sanzillo, “the executive has a responsibility to also produce an all-in-one, true and accurate inclusive project accounting that answers the question: 'How much is this costing the Canadian taxpayer?' These financial disclosures are partial, and absent a full accounting, are irrelevant. Because it is only a partial explanation, it says nothing about the financial viability of the project."

National Observer asked Morneau’s office why Trans Mountain appeared to be on track to incur more interest expenses than earnings, whether the minister knew about the interest expenses reported by CDEV at the time the fall fiscal update was presented, and if so, whether he deliberately withheld that information from the public.

“The interest payments are not considered as a loss to the government as they represent money flowing between Crown corporations,” said Jack Aubry, director of media relations and consultations for Finance Canada, who responded to the questions. The EBITDA figure cited in the fiscal update, he said, “is a better indicator of performance.”

Aubry also said the interest rate charged to the subsidiaries of CDEV was set by EDC “in alignment with the government’s instruction that TMC be managed on a commercial basis.” And he said the tolls being charged on Trans Mountain and the expansion project, if it proceeds, “will be levied according to existing contractual arrangements with shippers.”

The corporate structure of Canada's ownership of the Trans Mountain pipeline system works like this: CDEV, a Crown corporation, owns 100 per cent of Canada TMP Finance Ltd., which provides strategic direction. TMP in turn owns Trans Mountain Corp., which owns and manages the pipeline.

Trans Mountain Corp. controls three entities of its own: two Alberta corporations, one that employs pipeline employees and another that is an unlimited liability corporation, and a third that operates the system. The operator itself also is connected with the entity running the Puget Sound Pipeline.

CDEV itself also owns 100 per cent of two unrelated corporations: one dealing with Canada's 8.5 per cent interest in the Hibernia offshore oil project and the other that manages liabilities and retiree benefits related to the decommissioning of a former uranium mine.

Morneau's fiscal update underlined how the pipeline and its expansion project have “significant commercial value” and how their purchase “represents a sound investment opportunity.”

But EDC, which considers itself to operate at “arm's length” from the government, says the Canada Account is used for transactions it cannot support, usually due to a "combination of risks" such as the transaction's size, market risks or financing conditions.

The CDEV quarterly report is clear about the unknowns generated by the courts halting construction on Trans Mountain’s expansion. “TMC is exposed to significant risks as an oil pipeline operator such as operating risks, environmental risks and security risks,” the report reads.

“There is no certainty as to when permission may be granted to continue construction. In addition, the construction of (the expansion project) when resumed will be faced with difficult terrain, risk of cost overruns and the probability of hostile demonstrations.”

The terms of the agreement constructed by one of the CDEV subsidiaries, called TMP Finance, allow it to borrow up to $5 billion for the pipeline’s facilities and $1 billion to finance the construction of the expansion project, as well as a third parsel of the $500 million for “potential environmental damages” as required by the National Energy Board.

Kinder Morgan received $4.427 billion in the deal, CDEV said; $500 million went to backstop the NEB environmental damage condition, and “the balance was used to fund working capital requirements.” It said total revenue in September was $33 million, of which $27 was pipeline transportation tolls, and representing an EBITDA figure of $15 million of operating income.

CDEV said the preliminary purchase price was $4.4 billion “after adjusting for estimated working capital acquired” and represented $4.3 billion worth of property and equipment — including $1.2 billion for construction work in progress and $1.1 billion in “goodwill.”

This “goodwill” figure represents any excess value of the purchase price over the “fair value” of the assets acquired, it said. It breaks down as $473 million for the “economic benefits” associated with the completion of the expansion project, and $623 million for deferred income tax liability, CDEV wrote in their report.

The boys at Kinder Morgan are

The boys at Kinder Morgan are wallowing in their Canadian cash while Trudeau and Morneau preen themselves over their absent acumen and our nation awakes to the reality that we have been taken to the cleaners!

Amen! I compare Mr. Trudeau to that gentleman at the controls behind the drapes. "The Great and Powerful Oz." Four more of him at the controls is not where we want to be.

Not that I disagree with your

Not that I disagree with your assessment of the Dauphin but we don't have another realistic alternative right now. I like what I see of Jagmeet Singh as a person but his party is a complete shambles that has no idea what it stands for and Scheer's Conservatives are no different than Trump's Republicans.

Don't forget the Green Party. More Greens will join Elizabeth May in Parliament in 2019. If we're lucky, maybe no one party will win a majority.

I can barely balance my

I can barely balance my checkbook. So what gives me the moxie to criticicize economists and auditors? Hmph - it is probably my belief that even astrophysicists have some difficulty in grasping the practical magnitude of numbers with multiple zeros in tow. Mathematicians occassionally abandon numbers in favour of letters - like the "nth" degree. Is this a substitute for the human brain's inability to deal with orders of magnitude?
Politicians and financiers have in common their fondness for tossing out impossible numbers to bedazzle us great unwashed, so they don't actually have to explain what it means in a human scale. We aren't as smart as we sometimes think. Given our propensity for colossal errors it is a fluke that our race has managed to survive - so far. I wonder how far we can gamble on this "winning streak"?