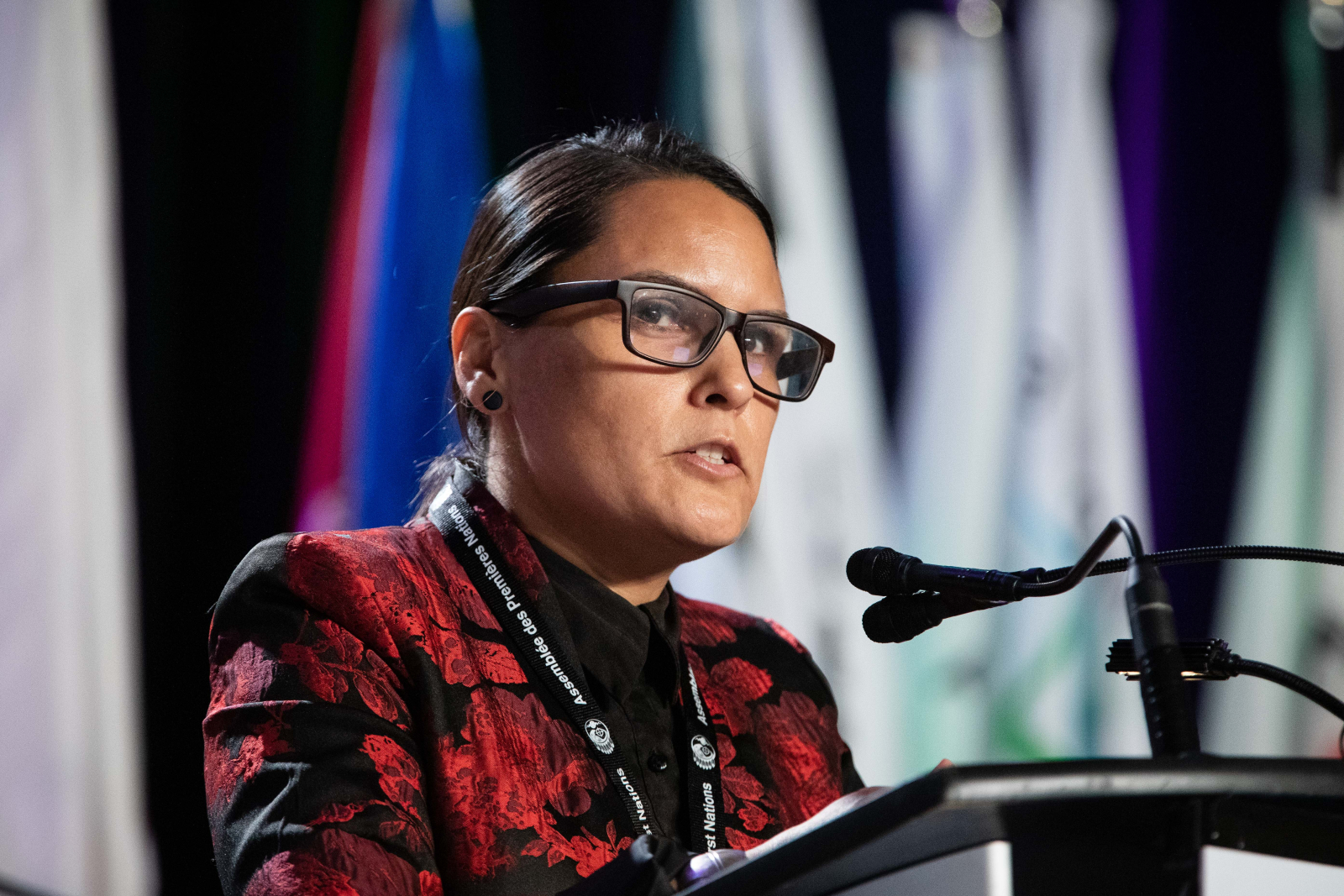 "Who wants to play Indigenomics?" Carol Anne Hilton asked at the Assembly of First Nations Special Chiefs Assembly in Ottawa on Dec. 6, 2018. Photo by Alex Tétreault
Previous story
Next story

Type "Indigenomics" into a document, see the red squiggly line that appears indicating a spell-check error, right-click and then press "add word," because the relatively new term is picking up speed in Canada's lexicon.

According to a 2011 TD Economics special report, the "Aboriginal market in Canada" was expected to sit at $32 billion by 2016. The Indigenomics Institute wants to bring that number to $100 billion in the next five years. To reach their objective, members have been busy researching and unleashing their findings on the already-existing Indigenous economy and barriers Indigenous peoples face in expanding into corporate Canada.

Rather than seeing Indigenous peoples as "in a place of economic despair," Hilton works to uphold Indigenous economic prosperity through the recognition of Indigenous rights and title.

"The ‘push’ for recognition by Indigenous peoples has taken the form of over 250 court victories, many in the resource sector, all of which Canada lost through the systemic reluctance of recognition of Indigenous rights," Hilton wrote in an opinion piece published earlier this year.

"This push/pull dynamic has created a new legal and economic space for First Nations people. This is the emerging space that has been created for our modernity by Indigenous peoples leadership within this country today."

The legal recognition of Indigenous rights and title needs to be translated into Indigenous economies, Hilton said.

"Who wants to play Indigenomics?" she has been asking at conferences and presentations across the country as well as internationally. "We need support for the concept, corporate and government leadership and visibility of Indigenous economies through new jurisdictional requirements and economic inclusion policies."

Among the Truth and Reconciliation Commission (TRC)'s calls to action, No. 92 looks to business as a form of meaningful reconciliation.

The commission calls on the corporate sector in Canada to commit to meaningful consultation on economic development projects and to ensure Indigenous peoples have equitable access to jobs, training and educational opportunities in the sector. It also calls for education and training for staff in the sector, regarding the histories of Indigenous peoples, including the history and legacy of residential schools, the United Nations Declaration on the Rights of Indigenous Peoples, treaties, rights and title, and Indigenous laws.

In her presentation Thursday in Ottawa, Hilton said Canada needs to unlock areas that Indigenous peoples have been excluded from in the past in order to create a new economic space rich in partnerships and investments with Indigenous peoples, Nations and businesses.

"Through a shift in legal influence, today Indigenous peoples own masses of land and entitlements through treaties and Aboriginal right and title and operate space in all areas of business, industries and the private sectors," stated a press release published by Muskwa Productions and Consulting, the institute's communications partner.

The $100BN Agenda is supported by our partner @NATOA_CA - "NATOA believes that the economic impact our communities hold as shareholders in corporate Canada, is largely yet untapped and waiting to be awakened." - Mark Sevestre, Pres of NATOA https://t.co/qjgj4jI1cr #Indigenomics pic.twitter.com/JiT1zd2Ka3

One initiative that the Indigenomics Institute is working on is called #supplychange. With the Canadian Council for Aboriginal Business, they aim to raise government and corporate procurement of Indigenous business services to five per cent through the Aboriginal Procurement Marketplace.

"If all levels of government in Canada were to procure five per cent of their current $224 billion spend from Indigenous businesses, this would equate to an $11 billion influx to the Indigenous economy," said JP Gladu, CEO and president of CCAB. "On the corporate side, five per cent of procurement contracts would translate into $23.6 billion. This is an opportunity to create prosperity and independence for Indigenous peoples across Canada, without spending an additional dollar."

The National Aboriginal Capital Corporation has delivered $2.5 billion in loans to Indigenous entrepreneurs over the past three decades. Partnering with the Indigenomics Institute, President of the National Aboriginal Trust Officers Association Mark Sevestre believes will help to untap the economic impact communities can hold in corporate Canada, he wrote in the press release.

This article raised many more

This article raised many more questions than answers. It says the "aboriginal economy" (which, given the wide geographic distribution of that community and its division into some 600 FN governments is more of a statistical invention, like "millennial economy" than a coordinated economic body) is a certain size, but doesn't drill down to where that money is really coming from.

The TD report makes clear that the total income has been going up because of employment in the resource sector, mainly in the west - and is later more specific this means oil, gas, and mining. Which of course this very news organ is practically dedicated to opposing; and which suffered a major loss of jobs and income in 2014 that the 2011 TD report could hardly have predicted, so whether its predictions for 2016 are even true now is a dubious claim.

There's a lot more journalism to be done here, digging up facts: what generates the most income to improve FN communities? Is it government help, or jobs? If so, which jobs, and how can they be promoted?