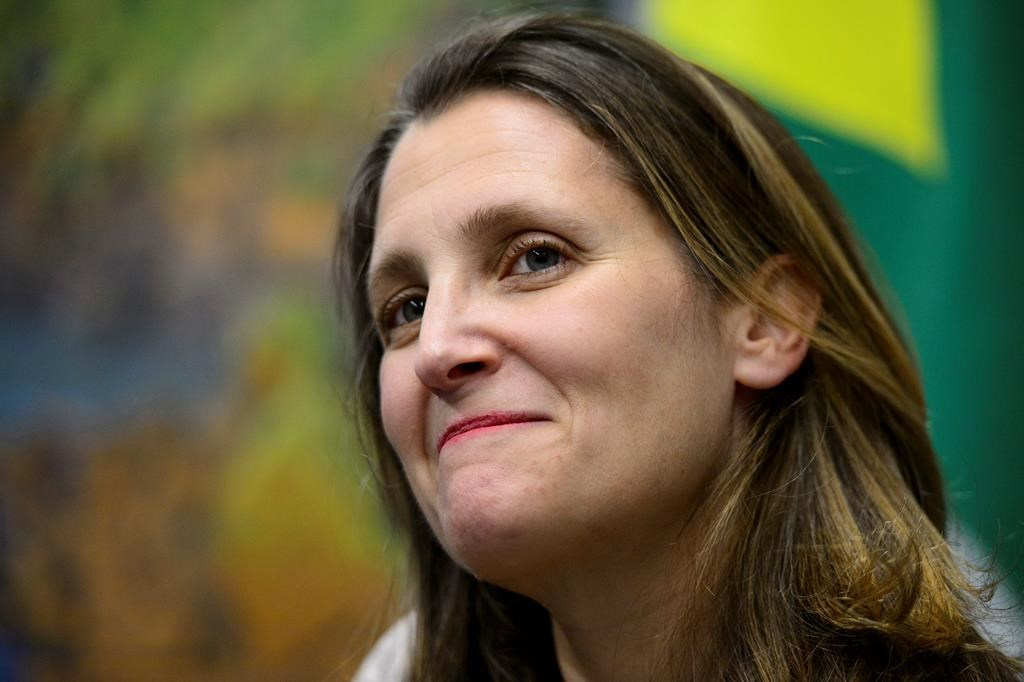 Minister of Foreign Affairs Chrystia Freeland takes part in a meeting at the G20 Summit in Buenos Aires, Argentina, on Friday, Nov. 30, 2018. File photo by The Canadian Press/Sean Kilpatrick
Previous story
Next story

As details of American allegations against a Chinese executive were revealed Friday in a Vancouver court, Foreign Affairs Minister Chrystia Freeland said Canada's ambassador in Beijing had briefed the Chinese foreign ministry on her arrest.

Freeland said that Ambassador John McCallum has assured the Chinese foreign ministry that due process is being followed in Canada and consular access will be provided to Meng Wanzhou, the chief financial officer of Huawei Technologies. She was arrested at the Vancouver airport on Saturday after a request by the United States.

Freeland refused to discuss details of the case, citing the imperative of keeping politics out of a live court proceeding — one that clearly has massive geopolitical ramifications.

The case will likely intensify pressure on the Trudeau government, which is being urged to refuse to allow Huawei products in Canada's next-generation 5G telecommunications networks.

A Canadian prosecutor told a Vancouver court on Friday that the United States asked Canada to arrest Meng because the U.S. alleges she violated sanctions on Iran.

The allegation against Meng came in a packed Vancouver courtroom during a hearing on whether she should be released on bail before an extradition process. The Crown lawyer told the hearing that the U.S. alleges Huawei Technologies used subsidiary Skycom to do business with Iran, violating sanctions against that country.

Meng is being accused of fraud by the U.S. government, which wants her extradited from Canada to face the charge.

The Crown says Meng is alleged to have said Huawei and Skycom were separate and she allegedly lied to an executive of an unnamed financial institution, which it asserts put the institution at risk.

China's foreign ministry has pushed Canada to reveal the reason for the arrest and the Chinese Embassy in Ottawa has branded Meng's arrest a serious violation of human rights.

Freeland highlighted McCallum's elevated diplomatic status as a former Liberal cabinet minister, and characterized his conversation with the Chinese as positive.

"I have not spoken directly to Chinese officials but John McCallum, our ambassador to China — our very senior ambassador to China — has spoken with Chinese officials," Freeland said Friday in a teleconference from meetings in Berlin. "And he has assured China that due process is absolutely being followed in Canada and consular access for China to Ms. Meng will be provided, and that we are a rule-of-law country, and we will be following our laws as we have thus far in this matter, and as we will continue to do."

Freeland reiterated what Prime Minister Justin Trudeau said Thursday: that Meng's arrest was part of an independent legal process that is separate from politics.

"The Chinese are well aware of John's seniority," she said. "They have had a good conversation with John. John has been very clear with the Chinese authorities — as we are with Canadians — that this was a matter handled as a part of our rule-of-law process; it was done without any engagement on involvement in the political level because we respect the independence of our judiciary."

McCallum was clear that Chinese consular officials will have access to Meng "just as we seek consular access for detained Canadians around the world, including in China."

Meng's father, the billionaire Ren Zhengfei, founded Huawei Technologies Ltd. in 1987 and established it in the southern China city of Shenzhen, across the border from Hong Kong.

Among other things, it is working with Telus and Bell Canada to develop equipment for fifth-generation wireless networks that are expected to transform telecommunications around the world over the next decade or more.

Huawei has become the world's biggest supplier of equipment used by phone and internet companies. But the company has faced widespread allegations that is it is an espionage organ of the Chinese military and security services — an accusation the company strongly denies.

The U.S. has led a charge to ban the use of Huawei products among its allies, particularly the Five Eyes intelligence-sharing network that also includes Canada, Australia, Britain and New Zealand. So far, New Zealand and Australia have banned the company from their 5G networks; Britain has expressed concerns and is considering measures.

Asked this week about a possible Canadian ban on Huawei, Trudeau said he would defer to the advice of his intelligence agencies.

The new director of the Canadian Security Intelligence Service flagged issues surrounding 5G technology in a major speech this week in which he described the threat to Canada's national security posed by "economic espionage" from "hostile states."

David Vigneault did not name China or Huawei in his speech, but he noted that "many of these advanced technologies are dual-use in nature in that they could advance a country's economic, security or military interests."

"In particular, CSIS has seen a trend of state-sponsored espionage in fields that are crucial to Canada's ability to build and sustain a prosperous, knowledge-based economy," he added. "I'm talking about areas such as A.I., quantum technology, 5G, biopharma, and clean tech."

On Thursday, former prime minister Stephen Harper told Fox Business News that while he was in power he became increasingly concerned about allowing the use of equipment from Huawei and ZTE, another Chinese telecom-equipment manufacturer.

"These are organizations, ultimately, tightly tied to the Chinese security apparatus, and we think there are some real, serious issues there," Harper said. "The United States is encouraging western allies to essentially push Huawei out of the emerging 5G network, and my personal view is that is something that western countries should be doing in terms of our own long-term security issues."