By Associated Press in News, US News, Politics | December 10th 2018
#912 of 1253 articles from the Special Report: Race Against Climate Change 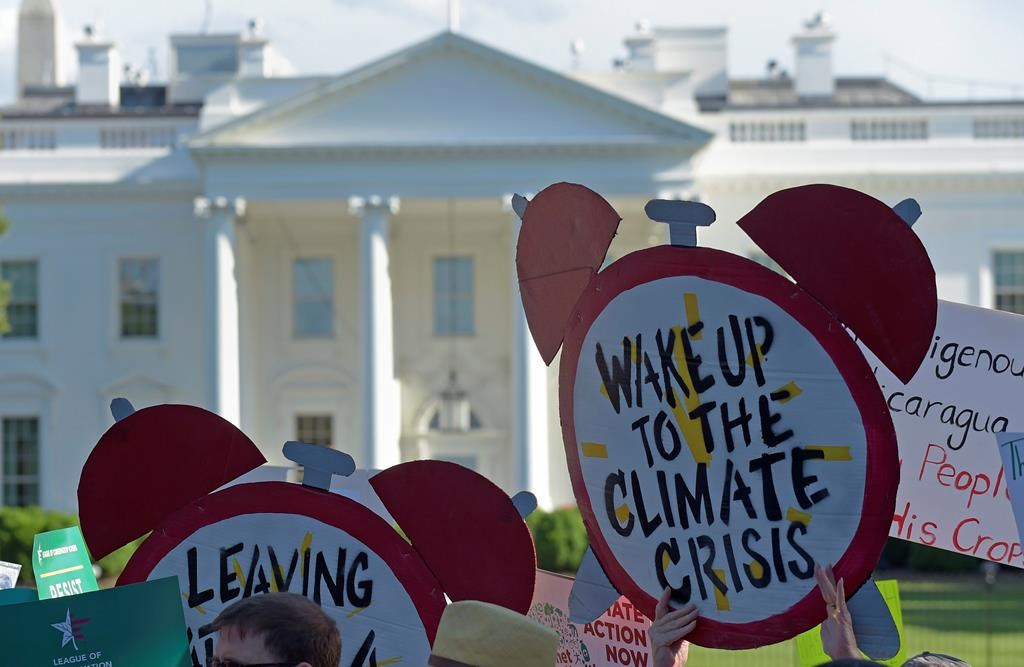 In this June 1, 2017 file photo, protesters gather outside the White House in Washington to protest President Donald Trump's decision to withdraw the Unites States from the Paris climate change accord. File photo by The Associate Press/Susan Walsh
Previous story

Environmental activists are ramping up a pressure campaign designed to drum up Democratic support for a sweeping agenda to fight climate change, with the 2020 presidential campaign in their sights.

Hundreds of young demonstrators are planning to turn out Monday on Capitol Hill to push Democrats on a package of ambitious environmental goals — including a nationwide transition to 100 per cent power from renewable sources within as little as 10 years — that's collectively dubbed the Green New Deal. Already embraced by Rep.-elect Alexandria Ocasio-Cortez, D-N.Y., an increasingly influential figure on the left, the Green New Deal is designed to nudge prospective Democratic presidential candidates to stake out aggressive positions on climate change. Some cast the goals as idealistic and politically risky.

Organizers with the Sunrise Movement activist group frame it as a make-or-break issue for Democratic voters, particularly young ones. But they're fighting recent history on that point.

Hillary Clinton and Sen. Bernie Sanders, I-Vt., jockeyed during the 2016 Democratic presidential primary over their plans to stave off the devastating effects that scientists have warned of as temperatures continue to rise. Ultimately, however, other issues dominated the debate, and climate change barely registered during the 2016 general election.

Stephen O'Hanlon, a spokesman for the Sunrise Movement, said, "Any senators or any other politician who wants the votes of young people in 2020 needs to back a Green New Deal that would transform our economy and create millions of new jobs stopping climate change."

As he weighs another White House run, Sanders has staked out an early claim on the issue, hosting Ocasio-Cortez for a climate change town hall last week and preparing a forthcoming proposal that an aide said is likely to align with the broad goals of the Green New Deal.

"Next Congress I will be working on legislation that addresses the scope of the crisis we face, creates tens of millions of jobs and saves American families money while holding fossil fuel companies accountable for the enormous damage they have done to our planet," Sanders said in a statement to The Associated Press. "Our job is to be bold, to think very big and to go forward in a moral struggle to protect our planet and future generations."

When Sanders introduced single-payer health care legislation last year, most Senate Democrats also considering presidential runs signed on at the outset. It's not clear, however, whether other prominent Democrats eyeing the White House would back Sanders' forthcoming climate change bill or seek to carve out their own territory.

Sen. Cory Booker, D-N.J., said last week that "obviously, we have been doing a lot of work trying to find some bolder things we as a nation could be doing" on climate change. Booker spokeswoman Kristin Lynch that his staff has held dozens of meetings since the summer aimed at shaping a broad climate bill and that he welcomes the activists' effort to spotlight the issue.

The staff of Sen. Kamala Harris, D-Calif., has been in contact with the organizers behind the Green New Deal push, according to spokeswoman Lily Adams, who said the senator is broadly supportive of the sort of sweeping climate change agenda that the effort envisions. As legislation aimed at enacting the Green New Deal begins to take shape, Adams added, Harris plans to take a close look at it.

The Green New Deal deliberately omits details on how to reorient the United States toward the drastic carbon emissions reductions it calls for, instead calling for a select committee in the House to devise a plan by 2020. That timetable is designed to rally Democrats behind a climate change strategy as they're picking a nominee to take on President Donald Trump, who has rolled back multiple environmental regulations and cast doubt on the scientific consensus that human activity is driving global warming.

Bill McKibben, a leading environmentalist whom Sanders tapped to help write the Democratic National Committee's party platform in 2016, said that it would be "hard for me to imagine a serious Democratic candidate emerging" in the 2020 presidential race who doesn't support a version of the Green New Deal, single-payer health care and a $15-per-hour minimum wage.

The plan, named for the New Deal that reshaped America under former President Franklin D. Roosevelt, envisions a costly and dramatically remodeled U.S. energy infrastructure as soon as 2030. It's a shift from where Democrats laid down their symbolic markers on climate change as recently as last year. Sanders and Booker, as well as potential presidential hopeful Sen. Jeff Merkley, D-Ore., introduced legislation then that aimed to shift the nation to 100 per cent renewable and clean energy sources by 2050.

Fossil fuels, mostly natural gas and coal, generated 63 per cent of U.S. electricity in 2017, compared with 17 per cent for renewable sources such as wind and solar, according to the nonpartisan Energy Information Administration. Nuclear energy comprised the remaining 20 per cent.

"Is it all that realistic? Probably not, in the environment where we work. Certainly not now," Sen. Tom Carper, D-Del., the party's senior member on the environment committee, said of the Green New Deal's target. "But it's a good aspirational goal."

Sarah Dolan, communications director for the conservative opposition research group America Rising, warned that Democratic presidential hopefuls' "race to the left" on climate change, as well as on health care, minimum wage and immigration, would backfire in 2020.

"Being the first to take the most progressive position of the day will only lead to a party that can't compete in the general election as it becomes unrecognizable to independent voters," she said.

If you are interested in makeing your own free energy check out this link http://bit.ly/fr33energy

From climate change to Auschwitz and back: a journey into dark and light