Huawei senior executive is not a threat to jump bail: lawyer assures court 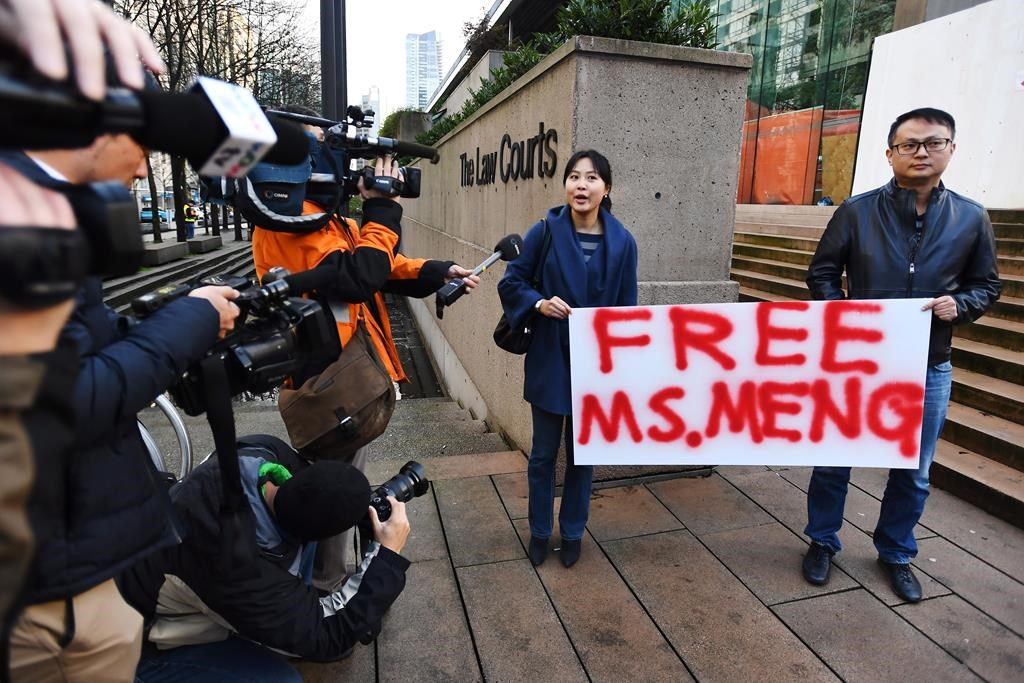 People hold a sign at a B.C. courthouse prior to the bail hearing for Meng Wanzhou, Huawei's chief financial officer on Monday, December 10, 2018. Photo by The Canadian Press/Jonathan Hayward
Previous story

The United States is showing its hostility toward Chinese tech giant Huawei by speculating one of its senior executives has avoided travelling there to dodge charges, a lawyer arguing for her release on bail argued Monday.

B.C. Supreme Court has heard Meng Wanzhou, 46, has not visited the U.S. since March 2017, but David Martin dismissed the relevance of that evidence at a bail hearing.

"It would take somebody who's utterly tone deaf to not understand that the United States has a political, legal posture of adversity against both China and its leading company," Martin told a packed courtroom where Meng, dressed in a green track suit, sat in the prisoner's box beside an interpreter.

The hearing was scheduled to resume on Tuesday.

The United States wants Meng, Huawei's chief financial officer, to face allegations of fraud related to the use of its subsidiary Skycom to do business with Iranian telecommunications companies between 2009 and 2014. Justice William Ehrcke said Meng is being held on a provisional warrant and the United States has 60 days to make an extradition request.

Martin told Ehrcke that Meng's husband, Xiaozong Liu, would pledge a total of $15 million — the value of two houses in Vancouver, plus $1 million cash — and live with her to ensure she complies with conditions imposed by the court if she is released on bail.

However, Ehrcke questioned whether Meng's husband can provide a surety because he is visiting Canada on a six-month visa and the form to provide the financial guarantee says it must be provided by a resident of B.C. The judge invited Martin to do more research and give him a "legal foundation" on which to go on.

Martin also proposed surveillance of Meng by former police officers who work for a security company or through an ankle bracelet that has been used by another firm in more than 500 cases. He also suggested his client could be supervised by both companies in what he said would be an unprecedented arrangement, telling the court Meng would pay for it.

He said the evidence in support of the United States' allegations against his client is "far from overwhelming."

"If extradited, she will vigorously contest the charges against her in the United States in order to clear her good name," he said, adding any attempt by Meng to escape would be an embarrassment to China and her family.

"She would never embarrass her father and the enormous company she has worked to build by her father."

Huawei was founded by Meng's father, Ren Zhengfei. The company has projected 2018 sales of more than US$102 billion and has overtaken Apple in smartphone sales.

John Gibb-Carley, a federal prosecutor representing the Attorney General of Canada, urged the judge to deny Meng’s request for bail, saying she has the financial means to flee and has no connection to Vancouver, where she spends only two to three weeks a year.

Gibb-Carley said Meng’s permanent resident card expired nine years ago, her British Columbia identification card expired 12 years ago and none of her references lives in Canada.

He also said Meng's husband would be an inadequate surety.

"If Ms. Meng was to flee, was to abscond, Mr. Liu would not be left behind here," he said.

Scot Filer, a former RCMP officer and head of private security firm Lions Gate Risk Management Group, told the court he is developing a plan to provide security for Meng.

Filer, who was named by Martin as the second surety for Meng, said his company has never monitored anyone on bail but former police officers and a driver would provide around-the clock surveillance and make a citizen's arrest if Meng were to violate any bail conditions. Filer has offered a $1,000 surety.

Under his company's proposal, Meng's travels would be restricted to the city and surrounding area, and she would be monitored using a dedicated encrypted network.

Stephen Tan, a founding partner of Recovery Science Corp., said the company monitors people through an ankle bracelet that sends an alert when someone goes outside an "exclusion zone."

News of Meng's arrest last week shook world stock markets and derailed British Columbia's trade mission to China on the weekend as the Chinese government warned Canada of "grave consequences" if Meng is not released.

Canadian authorities arrested the high-profile technology executive while she was travelling through Vancouver's airport on Dec. 1.

The bail hearing began Friday with Gibb-Carsley outlining the allegations. According to court documents filed by the U.S. Department of Justice, Meng faces "multiple criminal charges" in the United States and each charge carries a maximum sentence of 30 years in prison, if she were convicted.

Gibb-Carsley said Meng is alleged to have said Huawei and Skycom were separate companies in a meeting with an executive of a financial institution, misleading the executive and putting the institution at risk of financial harm and criminal liability.

None of the allegations have been proven in court.

Gibb-Carsley said Reuters reported in 2013 that Huawei was operating Skycom and had attempted to import U.S.-manufactured computer equipment into Iran in violation of sanctions. The story caused concern among banks that did international business with Huawei, he said.

Executives, including Meng, then made a series of misrepresentations about the relationship between the two companies to the banks, inducing them to carry out transactions linked to Iran they otherwise would not have completed and which violated sanction laws, he alleged.

The company has said it is not aware of any wrongdoing by Meng and Martin said no charge or indictment has been filed against his client, just a warrant.

Martin said Meng's 2013 presentation to an executive at HSBC was prepared by numerous employees at Huawei. The presentation did assert that Huawei operates in Iran in strict compliance with applicable laws and sanctions, he said.

Huawei sold its shares in Skycom before the sanctions became law in the United States under president Barack Obama in 2010, he added.

Huawei is the biggest global supplier of network gear used by phone and internet companies, and has been the target of deepening U.S. security concerns. The United States has pressured European countries and other allies to limit the use of its technology.