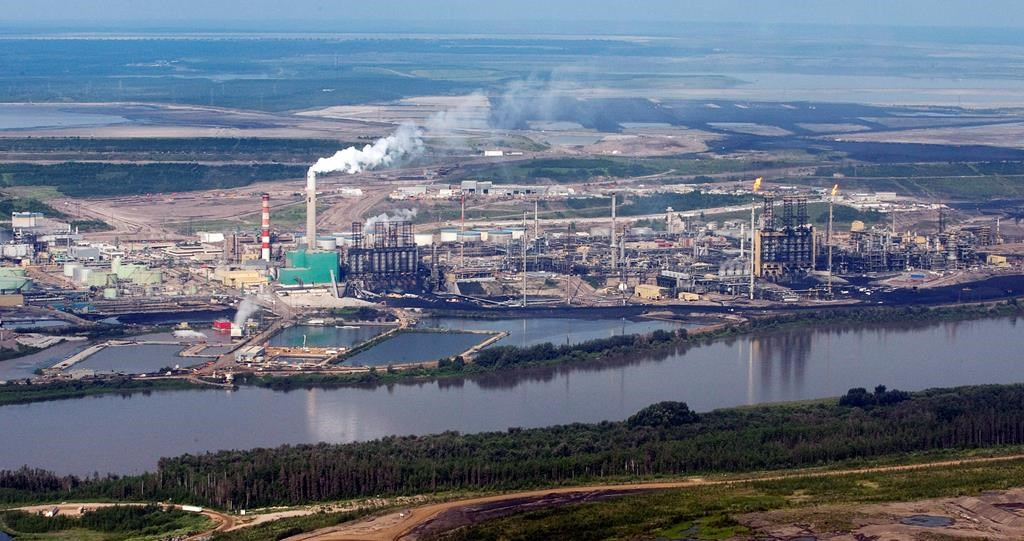 The Suncor mine facility along the Athabasca river as seen from a helicopter tour of the oil sands near Fort McMurray, Alta., on Tuesday, July 10, 2012. File photo by The Canadian Press/Jeff McIntosh
Previous story

It's unlikely a dramatic improvement in western Canadian oil prices since Alberta announced forced production curtailments two weeks ago will continue after the cuts begin on Jan. 1, a panel of experts agreed Thursday.

The difference between Western Canadian Select bitumen-blend heavy oil and New York-traded West Texas Intermediate oil prices had widened to as much as US$52 a barrel in October before recovering to about US$25.50 on Dec. 3, the day after the announcement by Alberta Premier Rachel Notley.

The differential tightened to as little as US$10.25 on Tuesday this week and was flat at US$12.25 on Thursday for barrels to be delivered in January, according to Calgary trader Net Energy.

That's actually slightly lower than what analysts consider a normal or typical discount based on transportation costs and the difference in quality between WCS and WTI.

"I expect there's going to be a lot of variance in the short-term over the next couple of months where the price bumps around trying to seek what its natural level should be," said Kent Fellows, research associate in energy and environmental policy at the University of Calgary's School of Public Policy, after a panel discussion on the topic in downtown Calgary.

"I would not expect the differential to stay as low as it was on Tuesday."

Audience member Gordon Tulk argued that Alberta has surrendered to pipeline opponents by reducing production and will be forced to extend cuts beyond the program's end date because the federal government's Bill C-69 to revamp the National Energy Board will make it impossible to build new pipelines.

"We've now put a ceiling on our production," he said.

But the panellists disagreed, with Trevor Tombe, assistant economics professor at the School of Public Policy, pointing out the province's goal is for a modest US$4 per barrel improvement in 2019 and it has set a firm end date of Dec. 31, 2019, for the curtailment program.

"Curtailing forever makes no sense at all," he said.

"Curtailing to avoid shipping out on expensive transportation modes (like rail or truck) makes sense ... It's better not to ship today and ship tomorrow on a new pipeline."

Current prices in Western Canada are based on speculation about what the market will look like in January and that will change, said Grant Bishop, associate director of research for the C.D. Howe Institute.

He said it's unclear how much of the wide price differentials over the past several months was caused by flaws in the way Canada allocates tight pipeline space, for instance, adding those factors may continue to influence prices even as production falls.

Alberta is depending on the federal government to show more leadership on the pipeline file and clarify what Bill C-69 will look like when implemented, said panellist Marla Orenstein, natural resources director for the Canada West Foundation.

Market access for Alberta crude is expected to improve when Enbridge Inc.'s Line 3 replacement project starts up in late 2019. Two other pipelines, the Trans Mountain expansion and the Keystone XL project, are both in limbo after being stalled by court decisions in Canada and the U.S.

Crude-by-rail shipments reached a record high of 270,000 barrels per day in September. Tombe said predictions that they could grow to as much as 700,000 bpd next year are unlikely now because the production cuts will reduce the need.

I don't think the price of

I don't think the price of oil, and oil industry profitability, will have any impact on Canada's future. Investors have been told to divest. The oil industry has been told to leave it in the ground. They have ignored our advice. A new battery technology will be marketable within the next few years and renewables are poised to capture the energy market. This new technology is a liquid metal battery that is much better than Tesla's lithium-ion battery. In the next twelve years, the renewable energy infrastructure will be largely developed. There is no reason for trains or pipelines. The future is renewable energy and our voice is growing stronger every day.