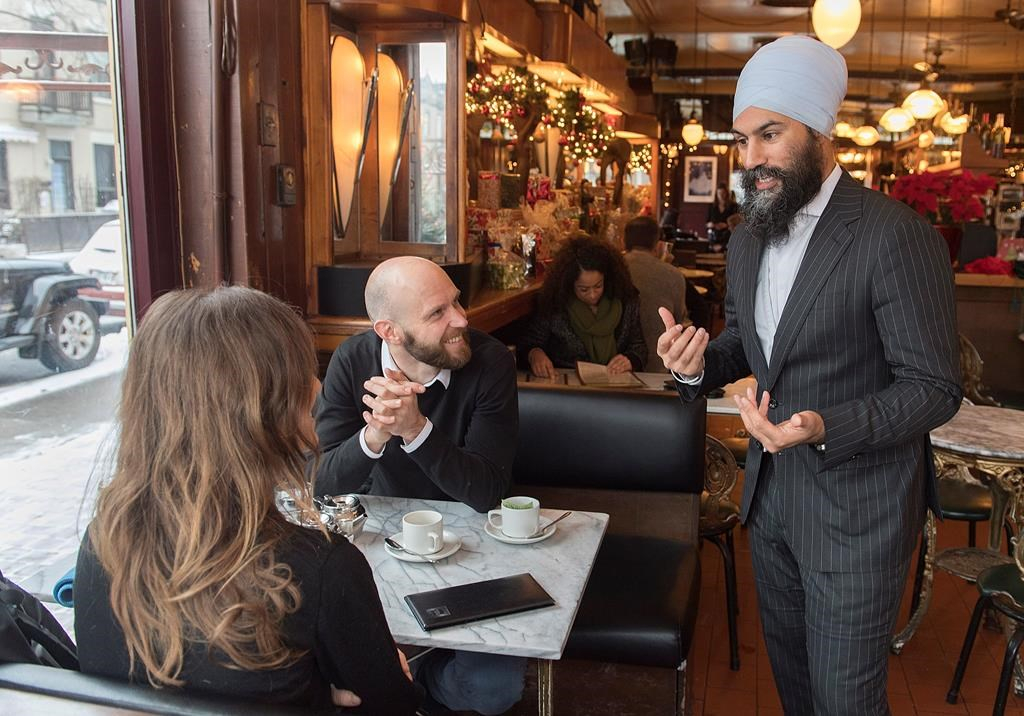 NDP Leader Jagmeet Singh speaks to a man and a woman in a coffee shop during a tour of the Montreal borough of Outremont, on Dec. 22, 2018, ahead of federal byelection which is expected to be called in early 2019. Photo by The Canadian Press/Graham Hughes
Previous story
Next story

It will be a big January for NDP Leader Jagmeet Singh as he looks to get a much-needed seat in the House of Commons.

Singh plans to hunker down next month in the B.C. riding of Burnaby-South as he tries to check "elected" off his to-do list for a critical campaign year ahead.

The byelection, expected for February, marks Singh's biggest political test to date while he also tries to calm party fears about fundraising, slumping polls and a growing list of veteran MPs who say they won't run in 2019.

Singh has been to the riding a number of times, said Jennifer Howard, his new chief of staff.

Howard is a longtime party strategist who was elected as a Manitoba provincial politician in 2007.

The party has secured a volunteer team and an office as it sets its sights on a victory for their leader, she said, adding that the New Democrats are not taking anything for granted as they work on a win.

"He is going to become Jagmeet the candidate," Howard said.

"We are doing all the things that you do to get ready for a campaign so I am very confident."

For his part, Singh has declined to say whether he will step down as leader should he lose in the riding, which was vacated by former New Democrat MP Kennedy Stewart, now Vancouver's mayor.

Howard said she's not letting any other thought enter her mind either.

"He is going to win," she said. "We aren't focused on any other outcome because in order to get that outcome, we have to focus on running that race and doing what we need to do to win it."

In addition to taking on the byelection battle, Singh also faces the task of looking at the party's roster for the 2019 election campaign.

B.C. MPs Nathan Cullen and Murray Rankin are also mulling their futures during the holiday break.

Canadians should not draw unnecessary conclusions from the departure of veteran NDP MPs, Howard said.

"I don't see any basis for that," she said. "I don't think that this is anything different than (what) typically happens at this stage (as) you get closer to an election ... This is about the time in the cycle when people make those decisions."